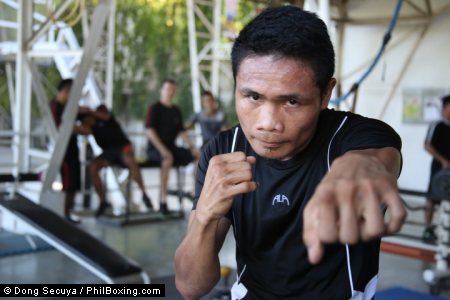 WBO light flyweight champion Donnie “Ahas” Nietes is in terrific shape for his mandatory rematch against Interim champion Moises Fuentes of Mexico in the main event of “Pinoy Pride XXV” at the Mall of Asia Arena on Saturday.

Strength and conditioning coach Nick Curson told the BoxingScene.com/Manila Standard that Nietes “looks amazing. His  physique has changed and so has his endurance which was always kind of suspect” as evidenced in his first fight against Fuentes when Nietes appeared to fade in the last couple of rounds which was aggravated by two cuts he suffered above his eyebrows.

Curson revealed that they had done some “altitude training” using a simulator which he brought from the US and has used for the last month. He indicated that as a result of his overall training regimen Nietes “looks phenomenal.”

He said Nietes “has been sparring with some great guys such as Milan Melindo and former IBF light flyweight champion Johnreil Casimero who lost his title on the scales last week when he came in five pounds over the 108 limit.

The strength and conditioning coach told us that in his first fight with Fuentes, Nietes “tired out” and that now “he knows his faults and has been working on the fight strategy.”

He echoed what trainer Edito “Ala” Villamor told us and that is Nietes “looked great (in sparring) and he is ready to go. His conditioning is there and I don’t see why he can’t win.”

Curson was clearly impressed with featherweight Rey “Boom Boom” Bautista who is making a comeback after a close , twelve round split decision loss to Jose Ramirez more than one year ago.

He said Bautista has “improved so much. He was so tense, so tight in his last fight that every punch appeared it would knock him down.” Curson disclosed that the flaws have been corrected and “now he’s got head movement, his muscles are more relaxed and he looks like he is 19 again and the kid they were talking about as the next Manny Pacquiao.”

During a workout last Saturday, Curson said Bautista “ he was like a Mike Tyson. This kid was so loose and explosive. It was great to see.”

Recalling that “Boom Boom’S father “used to throw him in the water when he was 5 or 6 years old to get the fishing nets out he has known hard work his whole life” but pointed out that “brute strength doesn’t work well in boxing.”

Curson said “ you have to have a little bit of finesse, combined with a little bit of that and explosive power and that’s what we’ve been working on. I think he’ll look good in this fight and show great improvement. I think it will take one or two more fights to see what he is really capable of. I think at that point he will be a world champion. I really do.” 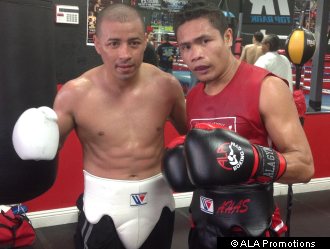 Trainer Edito “Ala” Villamor said the sparring session went well and was a good experience for Nietes since Segura is a slugger and will suit Nietes well when he fights (mandatory challenger) Moises Fuentes” on May 10 at the Mall of Asia along Manila Bay.

Villamor said they were originally scheduled to spar six rounds but it had to be cut short since there was a another fighter who weighed 126 pounds who wanted to spar with Segura, a former No. 8 in the Ring pound for pound rankings before former WBO champion Brian Viloria battered Segura to score an 8th round TKO victory in a WBO flyweight title defense at the Ynares Sports Center in Pasig Manila on December 11, 2011.

The trainer said he spoke to Segura after the sparring session and the former world champion told him “it’s is really difficult to find a sparring partner in the US that weighs below 122 pounds.” Segura himself weighs 123.

Villamor met with manager Javier Capitillo who also manages Alejandro Gonzales whom Villamor described as “good” after watching him spar in the presence of Ponce De Leon who was with his trainer Mario Morales.

He said the gym which “is properly managed by Ponce De Leon’s wife and is clean” also has several sparring partners for Filipino fighters at 122 pounds and above.

Villamor disclosed that Nietes, who will return to Manila to attend the Gabriel “Flash” Elorde Annual Awards on March 25, was working with outstanding strength and conditioning coach Nick Curson who reportedly did an excellent job with WBO minimum weight champion Merlito “Tiger” Sabillo who defends his title in Monterrey against No. 9 ranked Mexican Francisco Rodriguez Jr in a fight to be telecast by the giant broadcast network ABS-CBN at 10:15 a.m. on Sunday.

Viva Sports will telecast a pre-fight special on the Sabillo-Rodriguez Jr title clash on Pinoy Box Office (PBO) over SkyCable on Saturday at 8:30 p.m.

The special will provide highlights of four of Rodriguez’ fights which would give fight fans a chance to size up the challenger of Sabillo.