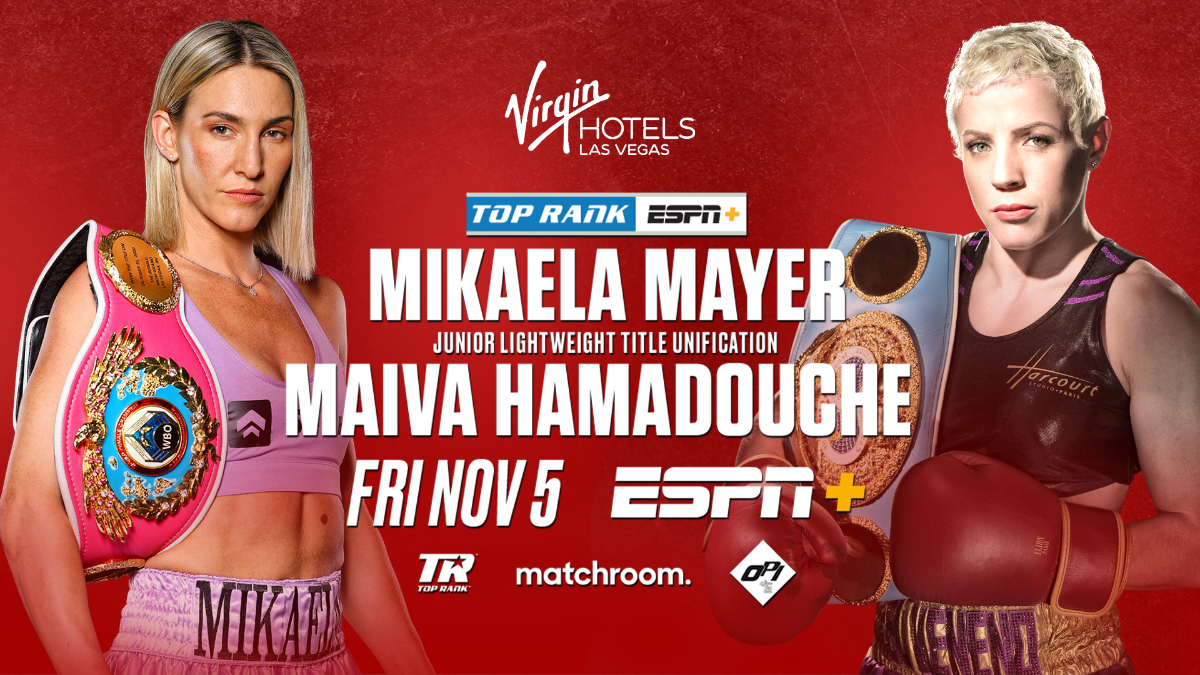 Mikaela Mayer made history in July 2020 as the first female boxer to headline a Top Rank on ESPN main event. Now the WBO junior lightweight world champion, Mayer is ready to break another barrier.

Mayer will fight longtime IBF world champion Maiva Hamadouche in a title unification showdown Friday, Nov. 5 at The Theater at Virgin Hotels Las Vegas, part of Curio Collection by Hilton, with the vacant Ring Magazine title also at stake. Mayer-Hamadouche is the first female world title main event in the four-plus year history of the Top Rank on ESPN series.

In the 10-round co-feature, rising middleweight contender Janibek “Qazaq Style” Alimkhanuly hopes to continue his rapid rise up the rankings against former world champion Hassan N’Dam.

Promoted by Top Rank, in association with Matchroom Boxing and OPI Since 82, tickets starting at $25 (not including fees) are on sale now and can be purchased by visiting AXS.com.

“Mikaela Mayer is quickly becoming the face of female boxing, and it’s fitting that she’s part of the first Top Rank on ESPN female world championship main event,” said Top Rank chairman Bob Arum. “From the moment she won her world title, she asked for unification fights and the biggest challenges. Hamadouche certainly fits that criteria, and she’s not coming from France to give up her title without one heck of a fight.”

Mayer (15-0, 5 KOs), ranked No. 5 on the ESPN.com pound-for-pound list, rocketed to stardom following her appearance at the 2016 Rio Olympics. Less than two years after her August 2017 professional debut, she shined on the Tyson Fury-Tom Schwarz undercard. In July 2020, Mayer blanked Helen Joseph by unanimous decision in the first female main event since the newest incarnation of Top Rank on ESPN boxing premiered in July 2017. On Halloween evening 2020, she dominated longtime champion Ewa Brodnicka to earn the WBO title. She made her first title defense in June at Virgin Hotels Las Vegas and turned back two-weight world champion Erica Farias over 10 rounds.

Mayer said, “This is the big fight I have wanted and the fight that I’ve been working so hard for. My prior fights were all important because I needed those wins to get me in this position. But THIS is the fight that will rocket my career or set me way back, and I have no intention of going back. The stakes are high, but I’ve worked hard, and I am fully prepared to capitalize on this opportunity to become a unified world champion.”

Hamadouche (22-1, 18 KOs, from Albi, France, has held the IBF title since November 2016, a run that’s included six successful title defenses and a recent appearance for her home nation at the Tokyo Olympics. She’s the third longest-reigning world champion in female boxing and returns to the pro game coming off a nearly 11-month layoff. Hamadouche knocked out Italian contender Nina Pavlovic last December in Milan, Italy, extending her knockout streak to four.

Hamadouche said, “I will arrive with my belt and leave with hers. My promise is to give Mikaela Mayer a war. She better start preparing to mourn the loss of her title.”