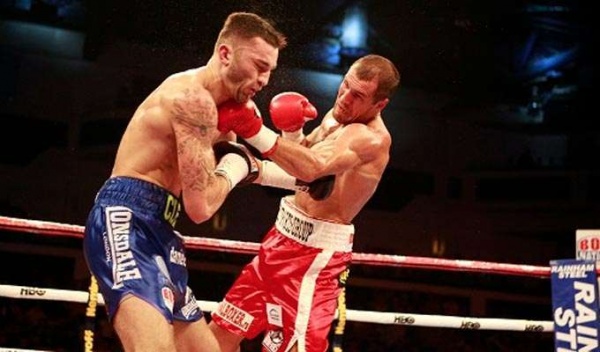 In a much anticipated clash between unbeaten light heavyweights, power-punching KO artist Sergey Kovalev (22-0-1, 20 KOs) demolished and dethroned WBO champion Nathan Cleverly (26-1, 12 KOs) on Saturday night at the Motorpoint Arena in Cardiff, Wales. Kovalev was the aggressor, but was cut over the right eye in round two. Kovalev dropped Cleverly twice with hard shots in round three and referee Terry O’Connor carried Cleverly to his corner at the bell. Kovalev dropped Cleverly again in round four and the bout was waved off at :21.

Kovalev said “This is my dream! I will add this belt to my collection,” he joked, with a big smile on his face, “There are many people in Russia and around the world who supported me. This is for them.”

Jubilant Kathy Duva, Main Events CEO, Kovalev’s promoter said, “Sergey did everything we expected him to do tonight and more.” She added, ” There is a reason we call him ‘Krusher,’ and he showed why tonight. He is the Russian Wrecking Ball and I will call on HBO Monday to start planning his next fight!”

In a rematch, former WBO cruiserweight champion Enzo Maccarinelli (37-6, 29 KOs) scored an eleventh round TKO over Commonwealth light heavyweight titleholder Ovill McKenzie (21-12, 10 KOs). A gut-check war of attrition ended when Maccarinelli cracked McKenzie with a left uppercut that put McKenzie out on his feet propped up only by the corner. Time was 2:44. Their first fight last year was a controversial TKO2 win for McKenzie when referee Ian John-Lewis suddenly stopped the fight even though Maccarinelli wasn’t hurt. No question about this stoppage (made by Chisora-Scott referee Phil Edwards).