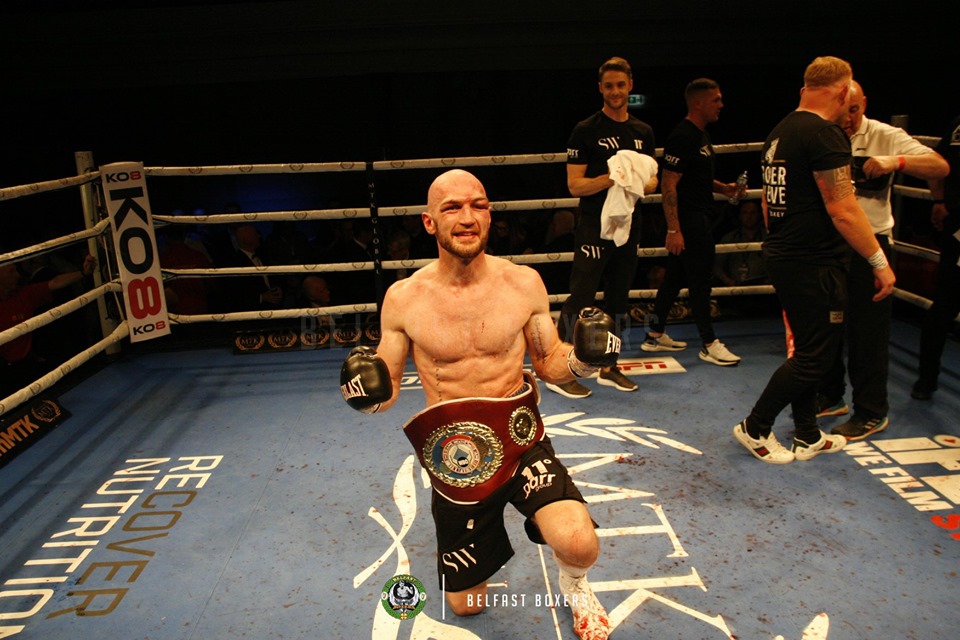 Barrow’s Liam Conroy came narrowly short in his bid to become the WBO European light heavyweight champion on Friday night, as he was defeated on points by former sparring partner Steven Ward.

In what was a pulsating and brutal contest at Belfast’s Ulster Hall, Conroy came close to winning the bout against the undefeated hometown hero on more than one occasion, although both fighters rained in punches throughout.

One of the best fights you’ll see ends in the ninth on a cut to @Stevenward_.

We go to the cards and he pips @LiamConroy92 to become the new WBO European king.

A clash of heads in the second round led to a cut just above Ward’s left eye and by the eighth that had become a deep gash with blood pouring out, eventually leaving the referee with no option but to stop the fight.

But because the cut was down to a head clash, it went to the judges, with all three scoring the bout 76-75 in Ward’s favor, showing there was very little between the two combatants.

There was nothing cagey about this title fight, which headlined the night, bar the first couple of minutes of the opening round.

Ward was the early aggressor, but Conroy took control in the second, hammering in some big shots while he had his opponent on the ropes.

The 26-year-old then knocked Ward down in the fourth with a left hook, but Ward showed his toughness by not only quickly shaking that setback off, but by also going on to control the next two rounds.

That eventually proved a crucial stage of the bout and Conroy looked to be tiring during it, but the Barrow ABC graduate found a second wind in the seventh, with a big right hand rocking his opponent once more.

At was at this point, however, where Ward’s cut had become a real problem, with the blood spilt from it actually causing Conroy to slip on the canvas in the eighth, and that eventually brought a premature end to a fight that deserved a grander finish. 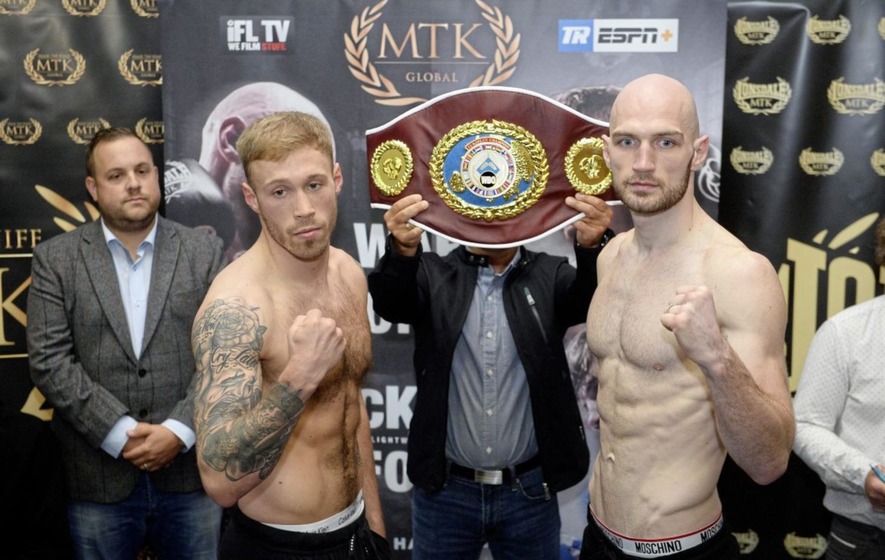 STEVEN Ward headlines a stacked bill at the Ulster Hall tonight when he takes on Liam Conroy for the vacant WBO European light-heavyweight title.

Conroy (17-4-1) was knocked out by hard-hitting Joshua Buatsi after three rounds of their British title rumble in March but he intends to recover lost ground against ‘The Quiet Man’ tonight. The Englishman is busy, game and confident and but Jamie Moore-trained Ward looked in great form in his last outing at the Ulster Hall – against Josip Perkovic – and he will hope to utilise that slick movement and devastating body-punching again at the popular Bedford Street venue.

“I want to keep moving forward and moving up,” he said.

“Liam Conroy has been where I want to be at British level and beyond, so all being well I’ll get past this fight and I’m sure I can push on for that level after this.”

Former English champion Conroy countered: “This is not personal for me.

“I’m not going to say anything bad about him as this is just a sport and I’m here to box to my best and bring that title back to Barrow.

“We’re both family people and down to earth. I don’t know him well enough to say how similar we are, but as fighters I think our styles blend well.

“We had a lot of good spars that were always fairly close, so it looks like it’ll be a good fight on Friday.” 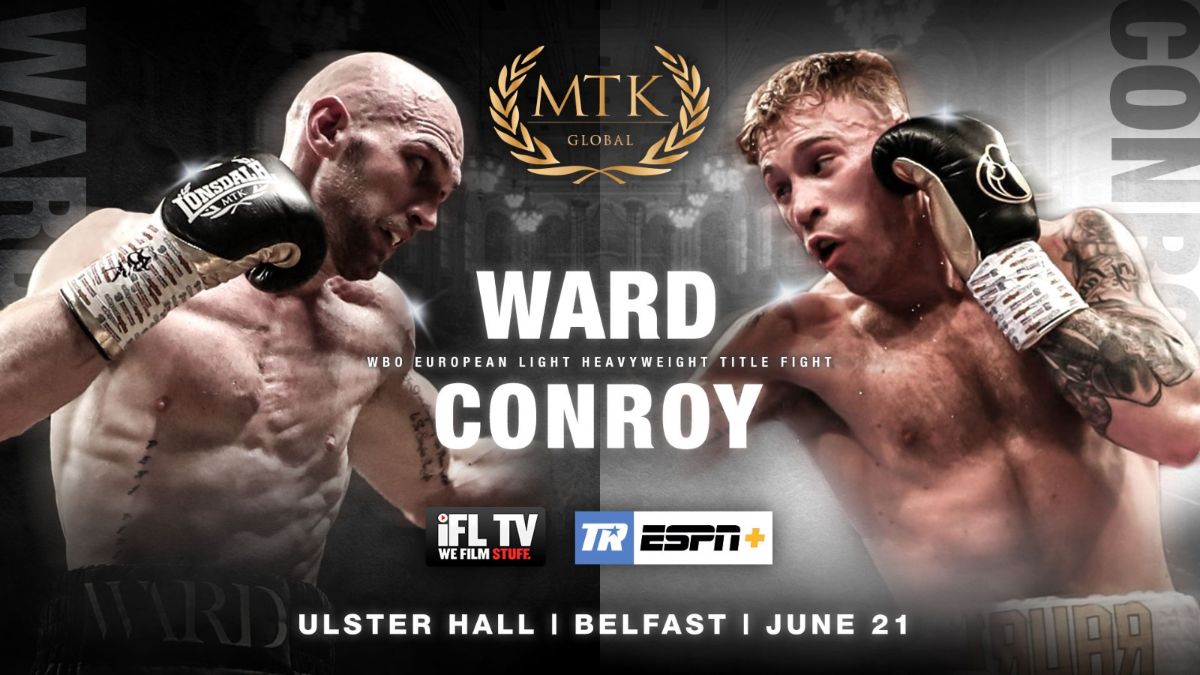 Steven Ward and Liam Conroy will collide for the WBO European light-heavyweight title on the #MTKFightNight at Belfast’s Ulster Hall on June 21 – live on ESPN+ in association with Top Rank.

Ward (11-0, 4 KOs), who will enjoy home advantage, said: “Winning the European title would mean the world to me. It’s a step up I’m ready for and victory will open up so many more doors.

“We’ve done a lot of sparring ahead of his fight with Buatsi. It was good sparring and we got on well. There’s no need to change any preparations based on the sparring we had.

“I’m confident in my boxing and once you get in there, Liam’s in the way of where I want to go. Our paths have crossed and getting past him will put me another rung up the ladder.”

Barrow-in-Furness’ Conroy (16-4-1, 8 KOs) added: “I’m going to the lion’s den again but I’m looking forward to it. I hope it’s a good atmosphere because I thrive off hostile environments. I’ve heard great things about that venue.

“He’s been my sparring partner and we’ve helped each other a lot in the past so there’s not too much homework to do. Myself and Johnney Roye really focus on my strengths and weaknesses anyway.

“I still want to build myself back up to the British title mandatory position. It’s still my dream and I won’t stop until I get it.”

Further announcements on fights and fighters for the show, which will also be broadcast on iFL TV, will be forthcoming in due course.