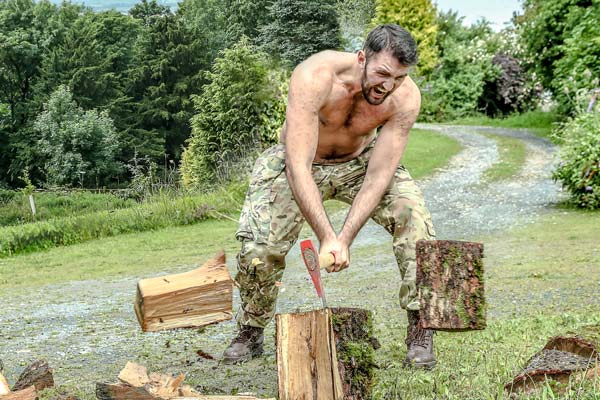 WBO heavyweight title challenger Hughie Fury has based himself at a spartan-style training camp at Lake Windermere as he heads into the biggest fight of his life against undefeated WBO champion Joseph Parker. Fury has set up camp in the mountains with his father and trainer Peter for his showdown with Parker on Saturday 23rd September at the Manchester Arena.

While thousands of tourists and holiday makers enjoy the beauty and tranquility of the Lake District, Fury is experiencing the flip side and is putting his body and mind through hell in the rough and brutal surrounding terrain to become the first man to beat Parker.

The 22-year-old Manchester star is going through a daily grueling schedule of long mountain runs and sprints, log chopping, free climbing mountains and lake swimming sessions, alongside sparring and boxing gym session and believes that this will give him the extra edge to become the new WBO world champion.

“We’ve come up here just to do runs in the past and we’ve always said that this would be a fantastic place to set up a training camp and what better time than now for the world title fight against Parker,” said Fury, the undefeated WBO mandatory and number one ranked challenger.

“This is absolutely perfect for me, I love the outdoors and the fresh air and the feeling of getting back-to-basics is getting the very best out of me. The greats of boxing like Ali, Dempsey and Louis all did it this way, in modern times we’ve all gone scientific with boxing training, but there’s a lot to be said about training the old way and I feel fitter and stronger than ever before.”

“I’m training at altitude with my some of the mountain runs leaving my lungs burning, I’m pulling tires attached to my back on uphill sprints, free climbing up the side of mountains that leave my arms and fingers burning and then I’m going for endurance swims and sprints in the freezing lakes.” “Then there’s the log chopping, it used to be common place for boxers to do this in the past, but it seems to have died out with some boxers going all body beautiful with weights in the gym. It strengthens every muscle in your body from your hamstrings, calves, quads and gluts to your abs, lats, traps, deltoids and pecs while working my cardiovascular endurance,”

“When the hard training is done for the day, then I can just rest and look out at the stunning and peaceful scenery around me, but strangely focus my mind on smashing Parker to bits and tearing the world title away from him,”

“I know that wherever he is training now he’s putting himself through the same to keep hold of his title, but that is pushing me every day to train twice as hard and go through my physical and mental limits. I know that on the 23rd September he won’t have an answer to what I’ve got.” Peter is overseeing his son’s training and implementing the fight strategy to defeat the fearsome puncher Parker who has 18 KOs from 23 fights.

He masterfully guided his nephew Tyson to his stunning victory over Wladimir Klitschko in November 2015, who had not been defeated in nearly 11 years, to become the Undisputed World Heavyweight Champion and believes Hughie can pull off a similar feat against Parker.

“Ali trained at Deer Lake and many of the greats trained at Big Bear in California, more recently Gennady Golovkin. The benefits are ten-fold training here in Lake Windermere. It’s the best way to train, it’s outdoor, non-polluted, rigorous mountain runs, quarries, tree and log chopping, lakes for swimming, it’s got everything we need. Then we’ve got tremendous indoor facilities as well with the local boxing gym in Windermere and Choices Spa and Health club in Troutbeck Bridge. Hughie will be in the best shape of his life against Parker and more than prepared. Everything thing we do is to win and he’ll be the new WBO World Champion.”