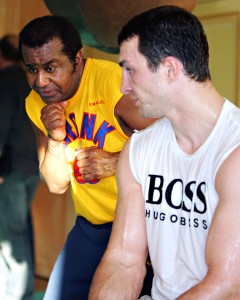 KLITSCHKO TO MAKE “ANOTHER” STATEMENT

San Francisco, CA– Nothing is more intimidating than “size” when it comes to heavyweights.  While I rate Larry Holmes #1 historically, the “Easton Assassin” might end up being displaced by current WBO & linear champion Wladimir Klitschko as the Ukrainian native has amassed an almost unequaled status in 17 years of boxing. And before anybody pitches a bitch about opposition, you can’t here as the younger Klitschko brother has beaten everybody put in front of him with “gusto,” but only after the late Emanuel Steward taught Wlad how to fight.

WBO “FIGHTER OF THE YEAR” WAS IN TRAINING

It was just last month in Budapest, Hungary, at the WBO’s 26th Boxing Congress where I announced Wladimir as the “WBO Fighter of The Year,” an award WBO President Francisco Valcarcel will give to him prior to this Saturday’s bout in Moscow against unbeaten Russian Alexander Povetkin. It truly is a fitting honor seeing Wladimir is now 60-3 with 50 guys leaving the ring earlier than they had hoped.  A professional since winning Olympic Gold in 1996, Wlad has had went 19-2 in WBO title fights alone. With the expected win over Povetkin Saturday, Wlad will be eclipsing Larry Holmes’ 19 defenses of the linear title, which is second only to Joe Louis’ magic number of 25.

As alluded to in paragraph one, the 6’7 Klitschko, younger brother of WBC titleholder Vitali Klitschko, fights tall and with his height, reach, conditioning and longevity, may in fact be the greatest heavyweight champion in history.  Seeing I tend to rate the “retired,” the still active Klitschko brothers won’t be given their final rating until it is all said and done.

When I watched him early on with the late Kronk Gym Goldfather Emanuel Steward, like the 2004 DaVaryll Williamson fight in Las Vegas, Klitschko, not the confident fighter he is today, was instead a bit apprehensive with the former US amateur stand out and got dropped.  There is no way I thought that Wlad, then in his eighth year as a professional would improve to the point where I’d be saying that at the end of his day, might be the greatest heavyweight champion in history.

NO MORE LEAKS IN THE KLITSCHKO HULL

The people that rap Wladimir say he was drilled thrice, the initial time by Ross Puritty, whom he ran out of gas against. The losses to Lamon (Don’t call him Lamont) Brewster and the late Corrie Sanders were two occasions where Wlad was slightly unfocused and got hit with punches he didn’t see incoming. The improvement, again credit goes to Emanuel Steward, will surely be in play Saturday when he hammers Povetkin at will until the fight is stopped somewhere before round nine.