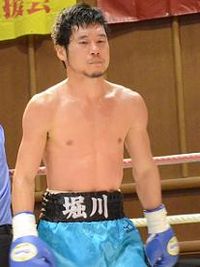 Veteran campaigner Kenichi Horikawa (32-14-1, 7 KOs), 108, proved too experienced and ringwise for Koji Itagaki (17-11-2, 7 KOs), 108, winning the vacant WBO Asia Pacific 108-pound belt by a unanimous verdict (116-112 twice, 117-111) over twelve hot rounds on Sunday in Hiroshima, Japan. Horikawa, participating in his seventh title bout—regardless of results, maintained the initiative from the outset to the end to seize the vacant regional belt. Having forfeited his Japanese national light flyweight title to upcoming Shiro Ken, Horikawa, 37, admirably gained his second belt to his credit. 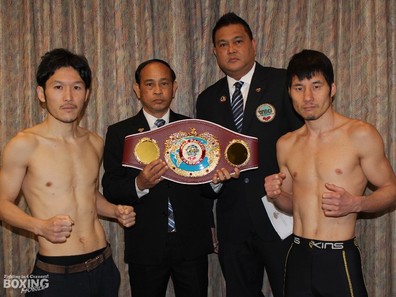 Today those two men took part in their wiegh in for the bout and both men made weight for the contest.

On the scales both men came in at just under 108lbs, the limit, for the contest.

At the weigh in both men looked in good shape and both showed their veteran experience with neither man showing signs of really drining themselves at the weight. Horikawa looked ever so slightly the more gaunt of the two fighters but neither had taken too much out of their body.

The bout seems to be one that both men are viewing as a must win with both fighters looking at the title as a potential way into the world rankings. Despite that aim neither man looked like they were under too much pressure and both looked calm and relaxed ahead of the bout.