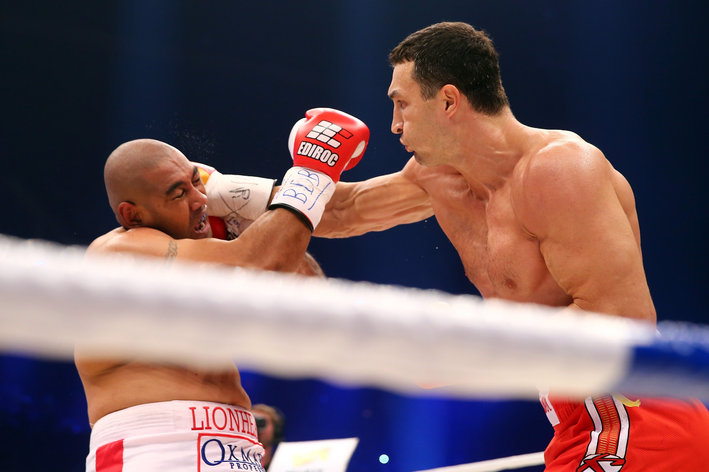 RingTV.com has a live round-by-round update of RING/IBF/WBA/WBO heavyweight champion Wladimir Klitschko’s 16th defense against Alex Leapai, whom he dropped once in the first round and twice in the last of a fifth-round technical knockout today at Koenig Pilsener Arena in Oberhausen, Nordrhein-Westfalen, Germany.

Referee Eddie Cotton waves an end to the bout at the 2:05 mark of Klitschko’s 16th defense, which ranks third, all-time, among heavyweights behind Joe Luis with 25, and, Larry Holmes, with 20.  Klitschko is 23-2 with 18 knockouts in title bouts.

But since falling to Brewster, a loss he avenged by sixth-round knockout in July 2007, Klitschko has won 20 consecutive bouts, 14 of them by stoppage, having previously last been in action for a unanimous decision over Alexander Povetkin last October for which he weighed 241.6 pounds compared to 225.75 pounds for his previously unbeaten rival.

In Leapai, Klitschko faced a 6-foot fighter who was coming off November’s unanimous decision victory over Denis Boytsov, who was floored in the seventh and ninth rounds. 1. Klitschko out-weighed Leapai, 274.4 to 248. Jab, jab, early by Klitschko. Leapai ducking really low, trying to set up a haymaker. The 6-foot-6 Klitschko’s leaning, at times on the 6-foot Leapai.LEAPAI GOES DOWN FROM A COUPLE OF EARLY DOUBLE-JABS. Up at the count of eight by referee Eddie Cotton. Doesn’t appear to be hurt. But Leapai eats two right hands. Klitschko continuing to jab and land the right. Not a good sign for Leapai. Klitschko, 10-8.

2.  Klitschko lands an early jab and solid right behind it to start the second. Leapai reaches and can’t land the left. Jab, Jab, right, right, by Klitschko near the ropes. Klitschko, who landed 10 jabs in the first round, continues to snap it in the second. Solid right hands landing also by Klitschko. Leapai is right there to be hit. Not cutting off the ring. Leapai is plodding and following. Zero intensity. Three, four, five, six jabs go unanswered by Klitschko. Seven, eight and then a right hand. Right hand by Klitschko, who has not had a need to go to the body. Jab is being used as a range-finder for the right, which Klitschko finally throws to the body. Klitschko, 10-9; Klitschko, 20-17.

5. Four, five left hooks by Klitschko to start the fifth. Three jabs and a right to the body by Klitschko. Triple jab by Klitschko. Leapai can’t get in. Head-popping jab, right, and two more jabs. Right hand nearly lands for Leapai. TWO RIGHT  HANDS HURT AND WOBBLE LEAPAI, WHO RETREATS!!! JAB AND RIGHT HAND FLOORS LEAPAI, HE’S UP AT THE COUNT OF EIGHT. 1:10 LEFT. JAB, RIGHT HAND, JAB, RIGHT HAND, LEFT HOOK, RIGHT, AND LEAPAI IS DOWN, UNDER THE ROPES. HE’S DONE. REFEREE WAVES IT OFF!!!!