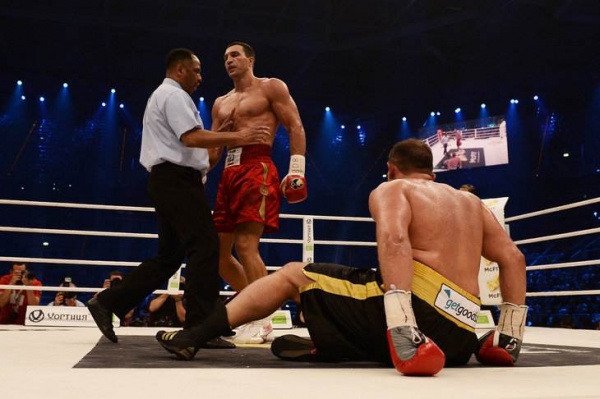 Boxing fans and pundits everywhere fully expected Wladimir Klitschko to successfully retain his WBA (Super), IBF, WBO, IBO and The Ring Heavyweight Championships against Francesco Pianeta on Saturday, and that is precisely what happened as “Dr. Steelhammer” won by way of sixth-round knockout.

The fight, which was staged at SAP Arena in Mannheim, Germany, had a party atmosphere and was packed to the guilds. Klitschko simply has that type of drawing power in Europe, as David Haye so eloquently put it for ESPN UK.

Pianeta entered the fight with an impressive 28-0-1 record, but many of his victories were over low-level talent or former stars past their prime such as Oliver McCall and Francois Botha. Klitschko was the bigger man as he always is and he used the height and weight advantage to perfection.

With the win, Klitschko picked up his 60th career victory — 52nd by knockout — and was successful in a title defense for the 14th consecutive time. According to ESPN Boxing, Klitschko has now won the third-most world heavyweight title fights of all time with 21.

Here is how each of the six rounds broke down as Klitschko was dominant yet again, but Pianeta showed plenty of heart ind defeat. Klitschko and Pianeta set the stage for a cat-and-mouse affair in the first round as there was plenty of gamesmanship involved. The Italian challenger attempted to get inside and land some meaningful punches, but the 6’6″ Klitschko used his jab to hold Pianeta at bay.

Whenever Klitschko landed a couple strong blows in a row, Pianeta made sure to wrap him up and prevent further damage. While neither man was overly impressive in the round, the champion clearly looked better.

Klitschko had his way with Pianeta in the second round as he measured him with his left hand constantly and landed right hands up the middle. He seemed to rock Pianeta at one point as the challenger backed into the ropes, but Pianeta gestured toward his arm to suggest that Dr. Steelhammer didn’t hurt him.

Although Pianeta tried to battle back, he couldn’t break through with anything of note. There wasn’t as much clutching and grabbing, as Pianeta was more aggressive but it didn’t work to his advantage.

Although Klitschko was once again the better fighter in the third round, Pianeta acquitted himself much better. Rather than waiting around and allowing the champion to pick him apart, Pianeta started to throw more punches. Most of Pianeta’s attempts were wild bombs, but he did manage to catch Klitschko flush in the side of the face with a left-hook haymaker.

Klitschko didn’t appear to be hurt, but it did seem to surprise him. If nothing else, it probably woke him up a bit and reminded him that he needed to be careful with a power puncher like Pianeta.

Pianeta hit the canvas twice in the fourth round, but he was able to survive Klitschko’s barrage. The first came early in the round, but it was ruled a slip. Klitschko caught him with a strong right a little while later, however, for the first knockdown of the fight. Pianeta looked more frustrated than hurt as he got back to his feet.

Klitschko backed Pianeta into a corner, but rather than going for the kill, he seemed to back off over the final 30 seconds or so. He probably could have finished Pianeta off, but he decided to play it safe with a big lead.

Klitschko knocked Pianeta down once again in the fifth, but the challenger found a way to make it to the sixth round. Pianeta wasn’t rattled by the knockdown, but his will appeared to be broken as he went in defense mode for the rest of the round. Rather than trying to battle back, he was simply trying to survive.

There were one or two occasions when Pianeta tried a couple wild haymakers, and he was lucky that Klitschko didn’t make him pay. It was hard to imagine that Pianeta could go on like this for much longer than he already had.

After playing with fire for a few rounds, Pianeta finally got burned in the sixth. The challenger did everything he could to mount a comeback, but Klitschko’s reach was too much to overcome. In fact, his constant measuring with his left hand was illegal, yet the official never made him stop. Even so, it’s unlikely that Pianeta could have done much against the champion.

Klitschko seemed to knock the wind out of Pianeta with a body shot and then he finished him off with a combination. Pianeta was clearly dazed, but he tried to get to his feet anyway with help from the ropes. He seemed willing to continue, but the referee did the right thing by stopping it.

It was blatantly obvious throughout the fight that Klitschko had the upper hand and was landing the better punches, but everything was truly put into perspective by CompuBox. According to the statistics, Klitschko landed over 90 more punches than Pianeta did over the course of the bout.

Pianeta often had to resort to wild haymakers due to Klitschko’s length advantage, and very few of them ultimately landed. The challenger only connected with one loud shot, but he was unable to follow it up with anything of note, so Klitschko pressed forward.

Despite being 37 years of age, Klitschko continues to dominate the moribund heavyweight division. There don’t seem to be any viable contenders out there, so it will be interesting to see what Klitschko does moving forward.