Stieglitz set to defend WBO title against Kiyota on July 13, in Dresden 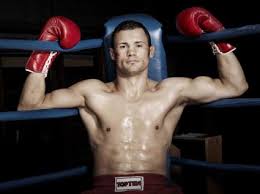 WBO super middleweight champion Robert Stieglitz (44-3, 25 KOs) will defend his title against WBO #10 rated Yuzo Kiyota (23-3-1, 21 KOs) on July 13 at the Energie Verbund-Arena in Dresden, Germany. It will be Stieglitz’ first defense since regaining the title against Arthur Abraham in March. “I want to show the fans strong fights,” said Steiglitz at a press conference to announce the fight. “Yuko Kiyota is an extremely physically strong and aggressive boxer. But my trainer and I have always have a plan. After twelve years, I’ve become ‘Boxer of the Year’ in Germany. So I can be a good role model for all my teammates and some of them can do it too.”

This will be the first show under Stieglitz’ new deal with the SAT.1 network.

“SAT.1 is our new TV-partner and that makes me proud. Robert’s victory over Arthur Abraham was the door opener for the deal with SAT.1. I can only say one thing: Let’s get ready to rumble! Kiyota is the first Japanese boxer to fight for a WBO world championship. He has a high knockout quota and Robert is the one who will be hunted.”