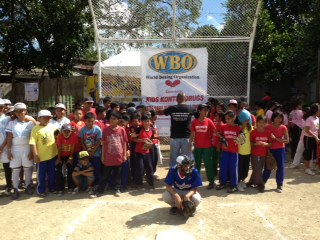 More games will be played on Saturday at the on-going WBO ‘Kids Kontra Drugs’ Baseball and Softball Tournament at the Labangon School grounds in Cebu City.

The opening ceremony was highlighted by the visit of WBO Asia Pacific chairman Leon Panoncillo and Cebu City Mayor Michael Rama along with the WBO officials who officiated the Donnie Nietes-Moises Fuentes championshio fight.

The event is being organized by 2011 Cebu Sportswriters Awardee Mexican American Michael Angel Lopez with the help of respected Dioniscio Bacarisas.

There are four divisions in the tournament: Elementary boy’s baseball, elementary girl’s softball, youth baseball boys (under 20) and high school girl’s softball.   A total of 8 games will be played for the championship rounds this Saturday. First game starts at 8AM.

“The kids played many games last Saturday. They were all pumped up full of adrenaline and kept on playing until sundown. They were happy because the WBO cared for them,” said Lopez.