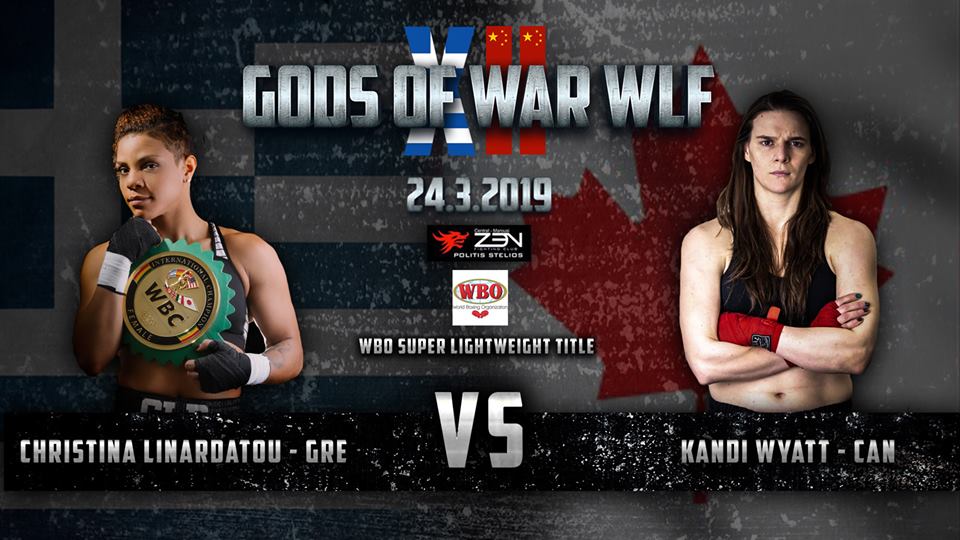 On March 24 2019 in Athens Greece the first World title fight in the countries history will take place between power punching Christina “Black Mamba” Linardatou (10-1, 5 KOs) and number 1 Canadian ranked Kandi Wyatt (8-0, 3 KOs). They will be fighting for the vacant WBO 140 pound title.

Manny Lavdakis, Perseas Promotions CEO, had this to say. “We are very excited to bring this event To the city of Athens. On March 24 history will be made. It’s amazing that a form of boxing took place in Greece during the Minoan ages which dates back to 2700 BC and this is the first World Boxing title ever contested here. The fight itself will be a great. You have two woman hungry to become world champions. Undefeated Kandi Wyatt is coming here to take this belt back to Canada. She is a very strong boxer with amazing fundamentals and her will to win has gone uncontested. She is not coming here for a paycheck or to lay down she is cooking to win. Christina will definitely have her work cut out for her. She will definitely have to use everything in her toolbox to get the win. On March 24 history will be made by these two women”.

Brian Cohen, who co-manages Linardatou and is overseeing logistics had this to say. “To have this event happen is truly monumental. When Manny was in the United States last year we sat at my kitchen table, grabbed 2 pens, 2 pads and drew up a prom otional plan. It took some time to marinate but Manny and his staff are executing it to perfection. To be associated with this is another step forward for woman’s boxing. It’s exciting for me because this country hosted the first Olympics and now to now have 2 woman fight for a world title is epic. Thank you to the WBO but most of all thank you to these to woman for stepping up and accepting the challenge. This will be a war”.

In July of 2019, “Black Mamba” sank her teeth into then WBC International Super Featherweight Champion Alycia Baumgardner to take the junior title.

On March 24th, Linardatou is the front-runner in her backyard for global dominance with her unbeaten Canadian counterpart.