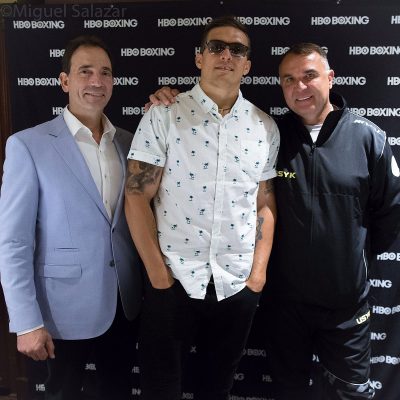 “Usyk has this X factor to excite fans. Similar to Chocolatito Gonzalez. Flyweights, super flyweights – these divisions weren’t getting a lot of attention. Especially in America. Because of his exciting style in the ring, his charisma outside it and exposure on HBO, Chocolatito became one of the fan’s favorites. Exactly the same thing can happen with Usyk – even without a lot of attention around cruiserweight division right now. Hopefully, with HBO’s help, we can bring the best cruiserweight fights to the US from Europe and Russia where most of the best fights are happening right now,” said Loeffler.

Q: Oleksandr Usyk, we all got the message that he’s the best cruiserweight in the world, his reign over belts is coming…but he likes to talk about fighting as a heavyweight. Kind of mixed message.

A: The other part is rather answering the question if he considers fighting as a heavyweight. Usyk clearly wants to unify all the titles in the cruiserweight division and whet timing is right he will consider becoming heavyweight. Because of his frame, talent, his technical skills and speed he can make a successful transition into heavyweight division. But first things first…

A: Absolutely. He just won a world title, beating the best cruiserweight in the world and breaking Evander Holyfield record. Even with these accomplishments, Usyk has still a lot more do. But, as we see with Golovkin, it’s not as easy to get all the title fights – even when you are ready to chase belts in guy’s back yard.

Q: I was a little underwhelmed with his US debut – especially the first part – of Thabiso Mchunu bout. Was Oleksandr a victim of his own – also ours – expectations? Were we wrong, expecting heavier version of Gennady Golovkin?

A: I don’t think so. It was simply a testament to Mchunu experience, his never easy to fight, slick and tricky southpaw style. He deserves credit – Mchunu stepped up to fight Usyk, when others said no. Even though it was a slow start for Usyk, he was still able to figure Mchunu out – and stop him. Michael Hunter is much more conventional style than Mchunu. He’s young, undefeated, has experience from being in the Olympics – definitely it will be a tough test for Usyk. Styles matchup in this fight will be definitely pleasing for the fans. Just like Oleksandr bout with Głowacki – and clearly at that time Głowacki was the best cruiserweight in the world. With only ten pro fights, he went to best champion home, Poland, and won unanimously. You can’t say enough how good he was there, on the champion home ring.

Q: In my 25+ years covering boxing in US, this is – at least – third attempt to resurrect cruiserweight division. Cunningham, Adamek, then Głowacki tried that, having great, sometimes spectacular fights on TV. It did not work. Now is Usyk time, with probably unprecedented list of great cruiserweights?

A: Usyk has this X factor to do it. No matter which division he’s in. Similar to Chocolatito Gonzalez. Flyweights, super flyweights – that divisions weren’t getting a lot of attention. Especially in America. Because of his exciting style in the ring, his charisma outside it and exposure on HBO, Chocolatito became one of the fans favorite. Exactly the same thing can happen with Usyk – even without a lot of attention around cruiserweight division right now. Hopefully, with HBO help, we can bring the best cruiserweights fights to US from Europe, Russia where most of the best fights are happening right now. This is such a deep division, in Europe, one of the most popular. Mairis Briedis from Latvia just became a new champion, there’s Murat Gassiev, Tony Bellew, Głowacki… there’s so many great fighters. Cruiserweights are always great athletes – big, with speed and big punch. Heavyweights, because they don’t make weight, you see a lot of them out of shape, not in the most exciting fights. There’s an extra pressure on cruiserweights, especially in America, because you have to stand out as a boxer. Just like it was on Chocolatito, who knew he can not bring boring fights to make people interested. He delivered.

Q: Times are changing. Vasyl Lomachenko challenged for world title in his just second professional fight, now, with less than ten fights, Loma is considered one of the best P4P fighters in the world. Usyk became universally recognized world champion in his 10 pro fight. Not long time ago, it was simply unthinkable.

A: Just like it was unthinkable to have three fighters from country other than US fighting as A-side on HBO tripleheader – it will happen this Saturday with Ukrainians Lomachenko, Usyk and Gvozdyk. Because they are talented, they have an exciting style. Fans recognize that. Back to your question: there’s a lot more attention – and acknowledgement – to fighters amateur careers. Both Lomachenko and Usyk were Olympic champions, had great amateur career. Transition from amateur to pro fighter becomes easy when you have amateur pedigree combined with punching power. GGG, Usyk – perfect examples. Usyk was build up by K2 Ukraine, was very popular, selling out big arenas even before he went to Poland and become world champion. Now, he’s successfully defending his title in America, on HBO… but he did not forgot his roots – as I understand, he’s ready for a big homecoming. Being from Crimea – is just part of his national pride. Usyk wants to come back and show his connection, prove to Ukrainian fans that he remembers their early support.

A: I think we can agree that Oleksandr Usyk is number 1. Number 2 – Murat Gassiev. Just 23 years old, he went to Moscow and beat very good Denis Lebedev. His age distinguishes Murat from anyone else. No big amateur career but training with Abel Sanchez, power he brings with him, sets Murat apart. Number 3-4, tie: you have look at Mairis Briedis and Tony Bellew. Tony always seems to be underrated and he always finds the way to win! I like him, we met through Eddie Hearn at WBC convention, he’s really likable guy. When I saw him standing next to David Haye, on the scales, at the weigh in, I was thinking: ‘Wow Eddie, it will be a tough fight…”. Number 5: Krzysztof Głowacki, because his win over Huck. He was very impressive with the way he knocked Marco out and he might have softened up Huck for Briedis. Lebedev is very close, but I think Głowacki is better under pressure. Very close. There’s also Yunier Dorticos, hearing good things about him, but he did not have any stand out wins – yet.

CLICK ON THE LINK ABOVE TO VIEW THE ORIGINAL DOCUMENT REGARDING THE WBO JR. MIDDLEWEIGHT TITLE BOUT BETWEEN ZAURBEK BAYSANGUROV vs. LUKAS KONECNY