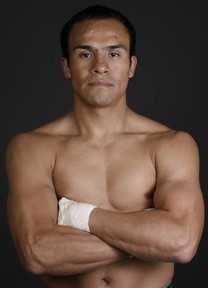 Juan Manuel Marquez is a four-time weight division champion in the featherweight, jr. lightweight,lightweight, and recently jr. welterweight in the division. He began his professional career at the age of 19, and actually lost his first fight by disqualification. Six years later (in 1999), Marquez got his first world title shot against Freddie Norwood for the WBA World Featherweight title. Marquez came up short; losing to Norwood by unanimous decision. Four years later, Marquez would have another shot at a world title, this time against Manuel Medina for the vacant IBF Featherweight title.

Marquez went on to knock out Medina in the seventh round and captured his first world title. In November 2003 Marquez unified the titles by also capturing the vacant WBA World Featherweight title, defeating Derrick Gainer. Marquez made three successful title defenses (one defense was a draw against Manny Pacquiao), but in March 2003 he was defeated by undefeated Indonesian featherweight Chris John. In his next fight, Marquez captured the interim WBO Featherweight title, defeating Terdsak Kokietgym by technical knockout in the seventh round. In March 2007 came one of his most recognizable victories, a unanimous decision victory over fellow Mexican Marco Antonio Barrera Marquez only made one successful defense against Rocky Juarez, and later lost the WBC belt by split decision against Manny Pacquiao in their rematch.

In 2009, Marquez had the opportunity to dethrone Floyd Mayweather, but the move up to welterweight was too much for him; losing by unanimous decision. “Dinamita” Marquez currently is the WBO “Super” Lightweight Champion and WBA Super World Lightweight Champion. On November 12, 2011 he took on Manny Pacquiao for the third time in his career. The highly anticipated bout started oof where the previous two ended; a back and forth battle between both fighters. Unfortunately Marquez came up short, losing a majority decison once again.

After a 5 month lay-off, Marquez returned to his native Mexico City to take on Sergey Fedchenko for the interim WBO Jr. Welterweight title. Marquez won by unanimous decision and captured his forth different title in a different weight divison.