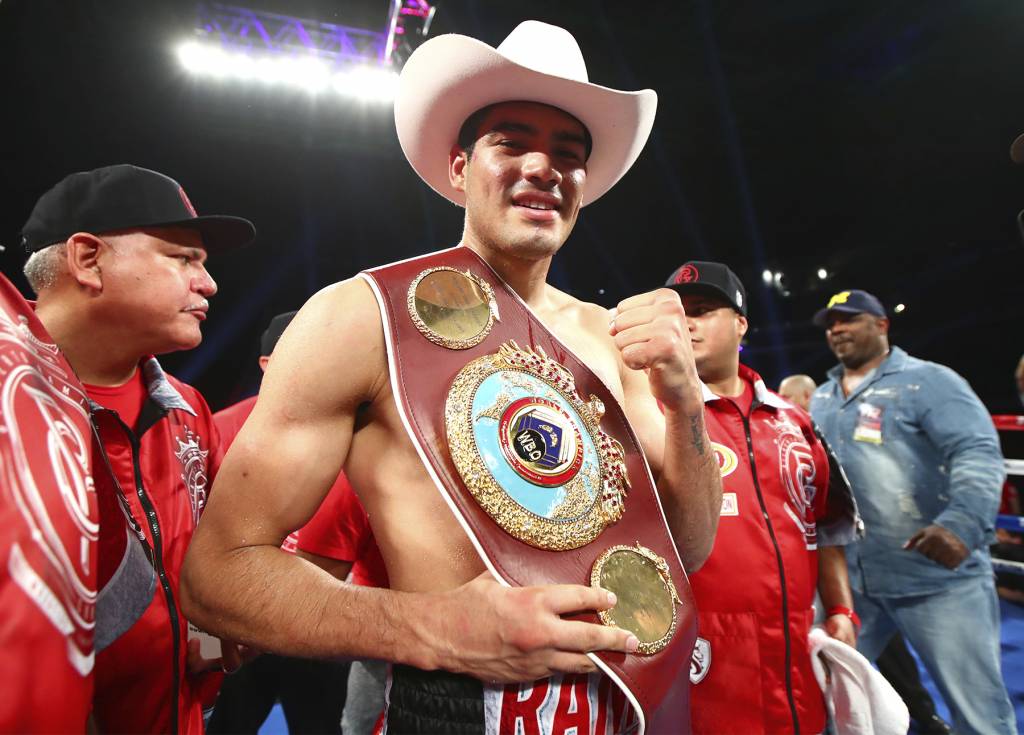 World Boxing Organization [WBO] super middleweight champion Gilberto Ramírez’s (37-0, 25 KOs) next defence will be in Oklahoma on June 30 against the hard-hitting Roamer Alexis Angulo (23-0, 20 KOs) of Colombia. Angulo, trained by respected Cuban coach Pedro Díaz, is based out of Miami and, although he is not well known on the boxing landscape, enters the bout with a high knock out ratio.

Speaking from his training camp in Los Angeles, California, Ramírez told BoxingScene.com that he is preparing for the encounter as he would for any other.

“I know that he’s a strong fighter, a hard puncher, he has a good record and as always we are preparing 100% for this to come out with the win,” he assured.

“He’s coming to take my belt away from me so that’s why I train so hard. I have to train harder than my opponents.”

Last February, Gilberto retained his WBO title against the previously unbeaten Habib Ahmed in what was a convincing display culminating in a sixth-round stoppage by the referee after Ahmed’s corner threw in the towel.

“I was happy to win so dominantly, and I hope this next one will be no different. I want to win convincingly.”

‘Zurdo’, originally from Mazatlán, Sinaloa, Mexico now trains in Los Angeles for his fights and finds the base there to be of great benefit.

“We come and go really,” he explained.

“We train in Los Angeles but of course my family is back in Mazatlán so we’ll go back there for a bit and then return to training camp after to prepare for fights. The sparring is much better in Los Angeles, I can concentrate better here, away from the distractions of home.”

The super middleweight division seems to be catching fire again lately, particularly with the likes of David Benavidez and Jose Uzcátegui making a name for themselves in the United States as well as the British contingent of 168lbs fighters. When asked about International Boxing Federation [IBF] champion James DeGale, Ramírez admitted that he sees some slippage in the Londoner.

“He seems to have dipped a little bit, he would be a good rival but I believe I have the skills to beat him and anyone else in my division. I want to show that I am the best at super middleweight. I saw his last fight, it was very close but I think he did deserve the win. I’d like to fight him, even go over to England if he wanted the fight. I’d love to fight in England and take his belt off him.

“I could also fight the winner of George Groves and Callum Smith from the tournament, but I think Callum Smith would be a more interesting fight. For me he’s the favourite to win the series and beat Groves. He’s tall like myself and he’s skilful so it would be a good fight against him too.”

The Mexican-based Venezuelan, José ‘Bolivita’ Uzcategui is another potential opponent for Ramirez. Indeed, he also trains at times in California, in the San Diego area.

“I have seen that Uzcátegui also trains in California, I have followed him a bit and I think soon he will be another opponent of mine. The division is good right now and there’s a lot of good fighters, I just want to show that I’m the best out of them and be a pound-for-pound fighter. I also know David Benavidez quite well, we’ve done some sparring together, we’ve been in the gym together and it would be a very competitive fight with him.”

Although we conducted the interview in Gilberto’s native Spanish, the 26-year-old has made huge strides in learning English and now regularly gives interviews on television in English, something he believes can help grow his fanbase.

“Speaking English opens you up to another type of market, I like communicating with people and they can appreciate and hear me with my own words. We’re in another country and English is the main language so why not speak it? It can only help you as a person too.”