Ricky Burns knows he cannot underestimate the challenge posed by the little-known Jose Ocampo if he wants to earn a unification bout in 2013.

Burns’ trainer Billy Nelson has been trawling the globe for footage of the Filipino – a replacement for the injured Liam Walsh – ahead of the WBO lightweight defence at London’s ExCel on December 15.

Just two rounds have been found and studied, meaning Burns will have to adapt in the ring in the bout, which is to be screened live on BoxNation.

The 29-year-old from Coatbridge told Press Association Sport: “I know he’s a southpaw, but that’s about it. Billy’s been struggling to get any footage of him at all.

“I’ll treat this fight the same as any other one. I’ll go out in the first round, see what he’s bringing to the table and then adjust my tactics to what he’s doing.

“It doesn’t really bother me. I don’t like to watch my opponents anyway. The way I fight I’m good at adjusting to other people’s styles.”

Should he win for the 21st time in succession, Burns has been lined up for a unification fight with unbeaten American Adrien Broner, who secured the WBC lightweight title last month.

Burns, who was a convincing victor over Kevin Mitchell in his last bout in September, added: “I just try to put it to the back of my mind. I’ve never, ever looked beyond any opponent so I’m not going to start doing it now.

“If I don’t go out there and win next week, the big fights aren’t going to happen.

“I know there is talk about it; I need to go out there and produce the goods next week for it to happen.”

Burns had been due to meet Walsh until the Norfolk-based fighter hurt his back in a road accident, with Ocampo, rated 14th in the world by the WBO, drafted in.

The 23-year-old has suffered five defeats, but most of them came in his teenage years, and 12 of his 17 victories have come inside the distance.

“He’s looking very sharp, he’s very fit, focused,” Nelson said of Burns. “It was difficult a few weeks’ ago when we never had an opponent, but now he’s got an opponent he’s a lot more focused.”

The challenge for Nelson has been assessing Ocampo.

“I’ve got a friend who has thousands upon thousands of DVDs of every fighter in the world,” Nelson said.

“Unfortunately, with Ocampo there’s only two rounds in the whole world. But every good champion can work out different styles and I’m sure Ricky will do likewise.

Burns remains grounded as the bout approaches, but has taken a temporary step back from his part-time job at a sports store in Coatbridge.

For those wondering why a world champion is working part-time in a sports store, the answer is simple.

“I enjoy it,” he said. “Everybody that comes in the shop I know who they are. Some of my pals and guys I train with work in there as well. It’s not really like work.

“It gives you something else to do apart from training all the time. It breaks the routine up, especially when you’re training for a fight.”

Ricky Burns will defend his WBO lightweight belt against Jose Ocampo, with the Filipino replacing the injured Liam Walsh. The fight will top Frank Warren’s bill at the London ExCel Arena on the 15th December, supported by a top class undercard including George Groves’ fight with Glen Johnson for the Commonwealth Super-Middleweight title.

Burns (35-2, 10 KOs) will hope to build on his last display, when he looked impressive in defeating the highly rated Kevin Mitchell inside four. Ocampo (17-5-1, 12 KOs), who is ranked 14th by the WBO, will be seen as a step down by many, and the man from Coatbridge should be looking for a stoppage victory.

However, it’s clear to see Burns is not underestimating his opponent. “This is going to be the hardest fight of my career so far against a young hungry challenger who will be looking to take my title,” he said.

Victory for the two-division world champion could set up a huge clash next year against undefeated American superstar Adrien Broner.

WBO World Lightweight Champion Ricky Burns says he will end the year with a bang against hard-hitting Filipino challenger Jose Ocampo. Scottish hero Burns makes the third defence of his title on promoter Frank Warren’s six-title extravaganza on December 15th at the ExCeL London. Burns is coming off a career best win destroying British rival Kevin Mitchell inside four rounds in September and is now in line for a huge unification showdown with American star Adrien Broner who won the WBC title earlier this month.

First he has to get through the heavy handed Ocampo, ranked number 14 by the WBO, who has stopped 12 out of 17 opponents early and although he has five losses and a draw, he has never been stopped. He replaces the original challenger Liam Walsh who was injured in a car crash two weeks ago forcing him to withdraw from the fight. The 23-year-old Ocampo comes from the Sarangani Province that is governed by Congressman Manny Pacquiao. 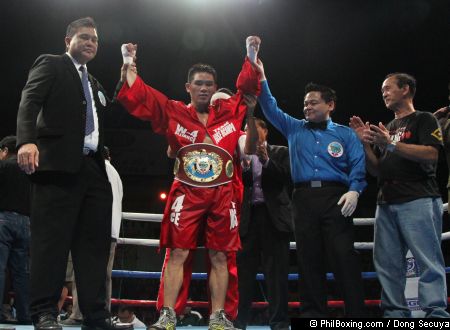 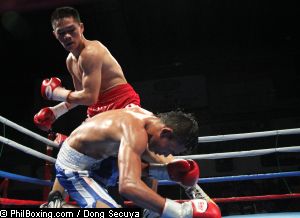 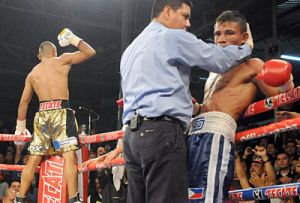