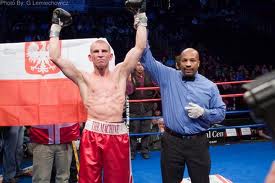 Undefeated NABO middleweight champion Patrick “The Machine” Majewski, who was originally set to face Dionisio Miranda in his co-featured bout on Global Boxing Promotions’ “November Reign” on Saturday, November 5 at the Mohegan Sun Arena in Uncasville, Conn., will now face another Colombian knockout artist in Jose Miguel Torres after Miranda was denied entry to the United States due to visa issues.

The bout, which will support the WBC International heavyweight title match between Mariusz “The Viking” Wach (25-0, 13 KO) of North Bergen, N.J., by way of Krakow, Poland and former world heavyweight champ Oliver McCall (56-11, 37 KO), may wind up as a more dangerous proposition than the original booking.

Majewski, 17-0 (11 KO), of Atlantic City, N.J., by way of Radom, Poland has been hard at work with trainer Bill Johnson to prepare for his title defense, which will also be contested for the vacant NABF middleweight title. With a win, Majewski hopes to jump further in the middleweight rankings with the World Boxing Organization (WBO) and enter into the title picture with the International Boxing Federation (IBF).

Torres, 22-5 (19 KO), of Magangue, Colombia, has a higher knockout ratio than Majewski’s original opponent (70% for Torres, compared to Miranda’s 60%), and is already in shape, having defeated Jose Antonio Rodriguez by a unanimous decision just a month ago.

“We are very pleased that we were able to secure such a quality opponent on short notice,” said Mariusz Kolodziej, CEO of Global Boxing Promotions. “Majewski is ready for a step-up fight, and he wants to challenge the best. Fights like this will put him on the short-list of top middleweight contenders.”

“November Reign” is on course to be the Mohegan Sun’s first boxing sellout in nearly ten years, with full buses coming from around the Tri-state to usher in fans to see unbeaten heavyweight knockout artist Artur “Szpila” Szpilka (8-0, 6 KO) of Wieliczka, Poland and featherweight prospect Kamil Laszczyk (4-0, 3 KO) of North Bergen, N.J., by way of Wroclaw, Poland, plus many other local New England fighters in action.