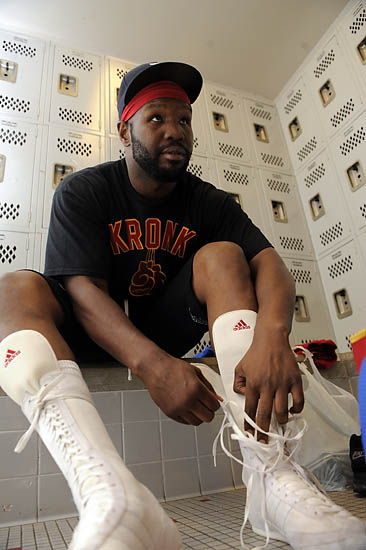 NABO and WBC International Heavyweight Champion Johnathon Banks gets dressed before holding a public workout at Ecorse high school in Ecorse, June 11, 2013. The event was in preparation for his rematch against Seth “Mayhem” Mitchell at Barclays Center in Brooklyn, New York, June 22. (David Guralnick / The Detroit News) –

At Kronk Gym, boxers learned to go for knockouts.

And when Detroit heavyweight Johnathon Banks puts his NABO and WBC titles on the line Saturday night against Seth “Mayhem” Mitchell of Brandywine, Md., Banks will try to knock out Mitchell a second consecutive time.

“I can’t do anything but expect a knockout,” said Javan “Sugar” Hill, Banks’ trainer. “That’s what we train for every time.”

As usual, Banks will wear gold Kronk shorts when he fights at the Barclays Center in Brooklyn, N.Y.. But in his second match since Kronk’s legendary trainer Emanuel Steward died last October, Banks’ preparation has been different.

For the first time in his career, Banks (29-1-1, 19 KOs) trained in Traverse City, where Steward trained Tommy “Hitman” Hearns before his 1981 welterweight title fight against Sugar Ray Leonard.

“Being able to teach while you’re still learning and active yourself I think it’s a little extra bonus in there,” Banks said. “It gives you almost a better overall picture of how everything’s going.”

In November 2012, he knocked out Mitchell in the second round in Atlantic City. The rematch originally was scheduled for last February, but Banks had to withdraw because a broken thumb.

Now, back at 100 percent, Banks said he’s ready to protect his titles — on his birthday, no less. But he’s not drawing extra confidence from his previous knockout of Mitchell.

“All my experience in the ring, out of the ring, around the great Emanuel Steward have given me all the confidence one man could have as far as I’m concerned,” Banks said.

“If Johnathon Banks would’ve out-boxed me for six or seven rounds or outclassed me, of course the fighter in me would’ve wanted a rematch, but I wouldn’t have taken the rematch right away,” Mitchell said in a release. “I believe that I’m a better fighter than him and I didn’t show everything that I’m capable of.”

Of course, Banks’ camp wanted to keep finding ways to improve, and one method was to move camp to Traverse City.

“Everything was fresh in Traverse City,” Hill said. Detroit’s Johnathon Banks is putting his NABO and WBC heavyweight titles on the line Saturday when he faces Seth Mitchell in Brooklyn, N.Y. David Guralnick/Detroit News

And since he was training in Michigan, Banks held a public workout at Ecorse High last week to see some people he grew up with. Banks went to Western International High in Detroit, but lived in Ecorse until eighth grade.

“It’s just nice to be home, nice to be in Michigan at a place that you could train and you have a very, very good environment,” Banks said.

A few months at home also provided some time relax for Banks, whose job as Klitschko’s trainer has taken him around the world. Klitschko’s fight in May was in Germany and his camp was in Florida.

Although some people in the boxing world are surprised he’s training the Ukrainian heavyweight, Banks said all his experience learning from Steward has made him a confident teacher.

“(Klitschko) is so picky about who he talks to and who he listens to and the fact that he listens to everything I say, No. 1 is a compliment to myself,” Banks said. “No. 2 it just shows how this man trusts me. He trusts me with his career. He believed in me and he chose me, and we’re continuing our success.”

And while Saturday’s fight has kept Banks from thinking about his future, he eventually wants to carry on Steward’s legacy by opening a gym in downtown Detroit.

“My goal is to be able to open up a gym to where the kids can come to — that’s what Emanuel wanted,” he said. “After this fight — obviously I’m planning on winning; I’m getting ready for the fight so I can’t give a pitiful performance — I’m hoping to do something in the city.”