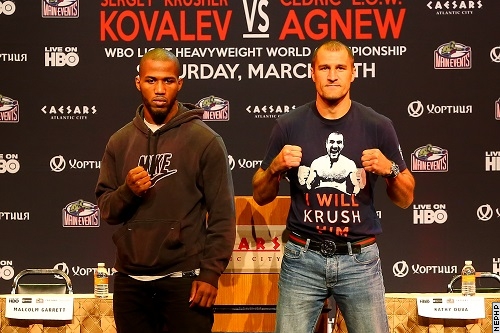 Atlantic City, NJ: Today amidst all the press about a potential fight with Adonis Stevenson, Sergey “Krusher” Kovalev (23-0-1, 21 KOs) faced the media and his opponent Cedric “L.O.W.” Agnew (26-0-0, 13 KOs) at Caesars to discuss the fight in front of them Saturday night at the Ballroom at Boardwalk Hall and live on HBO Boxing After Dark. Peter Nelson, director of programming, HBO Sports said, “We are very excited to have this event on HBO. We are always pleased to be back in Atlantic City. Boardwalk Hall is the home of many storied fights and Saturday we plan add another fight to that collection. These are the types of fighters HBO loves. It isn’t easy to find people who will step up and fight Sergey. This is Sergey’s debut on the network in a main event. We believe there is going to be a lot of action which will lead to big things down the road.”

Kathy Duva said it is usually difficult to find opponents for Sergey but it was not difficult with Cedric Agnew. She said, “On Saturday, Sergey will fight an undefeated fighter who asked for this fight. Clearly he has a lot of courage. I have always respected a fighter with that attitude.” Cedric’s promoter Malcolm Garrett of Garrett Promotions said, “We are ecstatic to be here. This is a fight this kid wanted. This is a fight he plans to win. We are glad that everyone in the media, and hopefully Kovalev, have overlooked him. I know Cedric can’t wait for the fight to begin. Cedric has trained hard and is the hardest working fighter I have ever worked with.”

Cedric “L.O.W.” Agnew said, “Everyone who knows me knows I am very quiet. I would like to thank HBO for this opportunity and my team for helping me prepare for this fight. I am ready to go out there and show the world what I am capable of. And show the naysayers what I am capable of. There are always going to be naysayers out there and people who overlook me. I say nothing to them and I will keep doing what I am doing. Saturday I need to fight smart and always be the smartest fighter in the ring. Sergey is a pretty good fighter. He is a tough guy. He is a world champion. He earned that spot. Come Saturday night I will earn mine.”

Kovalev’s manager Egis Klimas reminisced about the path he took with Sergey to get here, “Sergey and I have been down a very long road and it wasn’t easy. When Sergey came from Russia he didn’t speak a word of English. Our relationship is more than just manager-fighter. He is like my son. I took him all over the country to get him any fight we could. At that time nobody wanted him. Then I brought him to Main Events and they took the opportunity. Since then we have had a good relationship with Main Events. They did a very good job to get us here. This is our first main event on HBO. I wanted to thank Cedric’s team for taking this opportunity. I wanted to thank Sergey who trusted in me for all those years when I told him to be patient and that one day we would get here. Finally we are here with Main Events on HBO in Atlantic City. Saturday night do not reach for the popcorn or go for a beer during this fight because you can miss it.”

Krusher’s trainer, John David Jackson, kept Sergey focused these last few months while he trained for this fight. He said, “I want to thank everyone at Main Events, they are a first class company. It is great to be back here at Caesars. I appreciate all that they are doing for us. This is an intriguing fight. I take my hat off to Cedric for taking the fight because a lot of fighters talk a big game but when it comes down to it they don’t want to fight Sergey. We are not overlooking him at all. He is the present and we are not looking over him. We have to get passed him to get to the next phase in Sergey’s career. Sergey has great boxing skills but we won’t know if he will ever get to use them. Sergey is one of the hardest working guys I have ever worked with. It is a great night of boxing. Expect a great evening of boxing all around.”

Sergey “Krusher” Kovalev said, “I am not a talker but I just want to say stay tuned and don’t miss HBO Saturday night. I will try to make a good fight. Thank you to Cedric Agnew for agreeing to fight with me. Thank you to Kathy Duva and HBO. I don’t have any predictions for this fight. He is an undefeated guy and so am I. He has big motivation. He is on HBO and it is a title fight. I am going to do my job. Short fights are the result of my job and my work in the gym. I am only boxing. I go into the ring to show good boxing. I want to show the people what they want to see in the ring from me.”

When asked about the Adonis Stevenson situation, Sergey laughed and said, “I never go into the ring thinking about someone else. I want to say good luck to Adonis is in his career but someday he will meet my punch. We will talk about it after the fight.”

Finally, Duva discussed the undercard fights, “The undercard is loaded with tremendous fights if you can make it to Boardwalk Hall. We are going to have a group of fighters whose combined records are: 91-11 (64 KOs) vs. 76-5 (42 KOs). I would also like to thank our sponsors Caesars AC, Do AC and Khortitsia Vodka.”