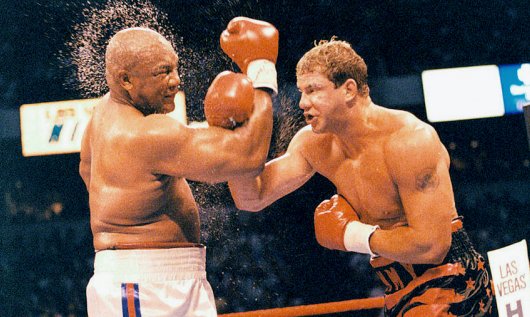 At the Thomas & Mack Center, Morrison fought the most disciplined fight of his career.

Morrison was not merely a white hope fueled on hype. He possessed serious power, the heart of a lion, and the ability to come back from adversity…

Former WBO heavyweight champion Tommy “The Duke” Morrison lost his life at the tender age of 44, but not before the muscle-bound, power-puncher of Rocky fame created some memorable moments for fight fans. Many may remember his fistic career most for the horrific knockout he suffered at the hands of “Merciless” Ray Mercer in 1991, the one-sided beating he took from Lennox Lewis in 1995, or his interminable battle with AIDS. But Morrison was not merely a white hope fueled on hype. He possessed serious power, the heart of a lion, and the ability to come back from adversity. The following are five of his greatest ring moments.

(5) January 11, 1991: TKO 1 James Tillis
The undefeated Morrison entered the ring at the Trump Taj Mahal in Atlantic City, New Jersey, against former world title challenger James “Quick” Tillis, a fellow Midwesterner. Tillis was on the downside of his once-promising career, having 17 losses, to go along with his 39 wins and 1 draw. But in most of those fights he managed to go the distance, including taking a young Mike Tyson a full 10 rounds in 1986. However, Morrison showed the raw power that endeared him to many, as he put Tillis on the deck three times in under two minutes in round one. He dropped him first with his mean left hook, the second time with a ferocious right uppercut, and the third time with another hook. As ring analyst Al Bernstein, not normally given to understatement, said at the time, “I guess [Morrison] does have a good left hook.”

(4) February 19, 1991: TKO 1 Pinklon Thomas
Morrison’s next trip to the ring matched him with another fighter on the downside of his career—former world champion Pinklon Thomas, he of the potent left jab and quick hands. The 33-year-old Thomas (30-5-1 coming in) had only been stopped twice before facing Morrison, by Mike Tyson in 1987 and Evander Holyfield in 1988. At Kemper Arena in Kansas City, Missouri, Morrison opened up a nasty gash over the ex-champion’s right eye. He battered Thomas with left hooks to the body and once again showcased a dangerous right uppercut. Thomas did not go down in the first round. He didn’t, however, come out for the second.

(3) June 27, 1992: TKO 9 Joe Hipp
Morrison squared off against fellow contender Joe Hipp at Bally’s Hotel & Casino in Reno, Nevada, in an unforgettable war. The southpaw Hipp entered the ring with a solid 24-2 record and was a tough, durable opponent. Morrison suffered a broken jaw and hand during the bout (Hipp had his cheekbone shattered.). Hipp bloodied Morrison in the fourth round and hurt him badly numerous times with combination punching. Although Hipp was down in the fifth, by rounds eight and nine it looked like the underdog might stop Morrison. But “The Duke” rallied with his patented right uppercut bomb and stopped Hipp at 2:47 of round nine. It wasn’t pretty, but this bout epitomized the crowd-pleasing style and heart of Morrison.

(2) January 16, 1993: TKO 8 Carl Williams
Carl “The Truth” Williams lost a disputed decision to the great Larry Holmes in 1985 for the IBF heavyweight title. He also suffered a devastating first round knockout at the hands of Mike Tyson in 1989, when “the baddest man on the planet” was still near the peak of his powers and decimating the division. A win over Morrison would catapult Williams back into contention. It was not to be. At the Reno-Sparks Convention Center in Reno, Nevada, Morrison dropped Williams once in the first round and once in the third round, each time with his patented left hook. But Williams fought well in spurts. He won the fourth and dropped Morrison twice in the fifth. But Tommy came back and showed great heart that night. He was pummeling Williams along the ropes when referee Mills Lane stopped it at 2:10 of round eight.

(1) June 7, 1993:  W12 George Foreman
Morrison squared off against “Big” George Foreman (72-3 at the time) for the vacant WBO world heavyweight championship. The comebacking Foreman had given Evander Holyfield a tough tussle and many feared that his raw power would at some point stop Morrison, who had been badly hurt by the likes of Ray Mercer, Carl Williams and Joe Hipp. Conventional wisdom, at times more conventional than wise, supported the notion that at some point Morrison would revert to brawling and give the tree-chopping Foreman a puncher’s chance for a knockout. But that night at the Thomas & Mack Center in Las Vegas, Nevada, Morrison fought the most disciplined fight of his career. He stayed on the outside and used his advantages in speed and youth for the vast majority of the 12-round fight. Foreman said he would retire after the bout. (Amazingly, the next year Foreman became the oldest heavyweight champion in history with his comeback kayo of Michael Moorer.) But on this June night in 1993, Tommy Morrison fulfilled his potential, silenced his critics, and was crowned heavyweight champion of the world.