Billy Joe Saunders spurred on by failure at the 2008 Olympics ahead of WBO title bout against Andy Lee: ‘I’m not prepared to fail on the big stage again’ 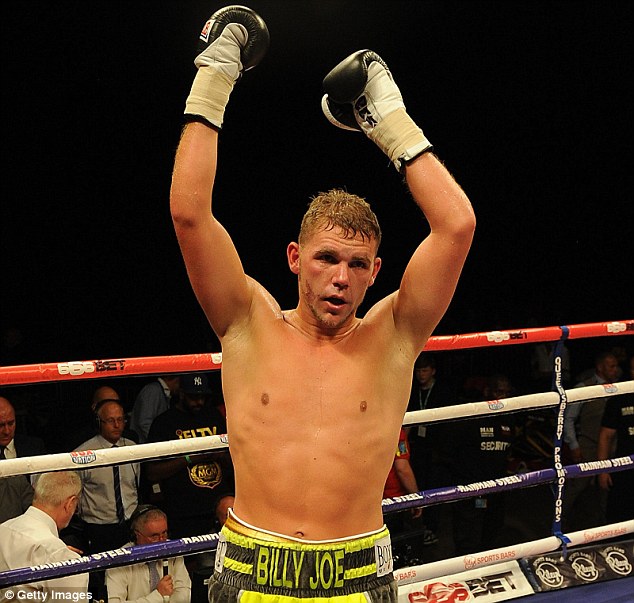 Billy Joe Saunders is still haunted by what he did in the summer of 2008.

At just 18 years old, he was considered one of the hottest prospects in all of world amateur boxing and had broken ground as the first ever member of the British Romany community to qualify for the Olympic Games.

But it all turned sour that August in Beijing and, seven years on, what happened in China still keeps him up at night.

He had reached the pinnacle of his sport only to come crashing down to earth with an early exit. He’s back at the peak again, now as a professional, and insists there will be no tumble this time around.

Saunders faces Andy Lee for the Irish southpaw’s WBO middleweight title at Manchester Arena on December 19 in his first crack at world honours after racking up a perfect 22-0 record in the paid ranks. He insists he’s ready this time.

‘I know I can’t come out of that ring a failure,’ he said, leaning back from a table at the Slainte restaurant above Marbella’s MGM gym. ‘I failed on the big stage, at the Olympic Games, and I think about it all the time.

‘What happened then was a blessing in disguise because now I know what I lost there.’ Saunders, the teenage welterweight, had cruised past Turkey’s Adem Kilicci 14-3 in the first round to set up a showdown with gifted Cuban Carlos Banteaux in the Last 16.

That’s where it all went wrong for the Hatfield youngster, who initially blamed the judges’ scoring on his exit and resulting failure to medal.

But, reflecting on the trip to the far east, the 26-year-old knows the damage was done long before he stepped through the ropes that day. He said: ‘I did that when I was 18 through my own stupidity.

‘The Cuban, I would have beaten eight times out 10 and he went on to win silver. Think what I could have done at that age.

‘But it’s the reason why I’m here, at the MGM Gym in Marbella, in these surroundings, away from everyone on my own training and everything is going perfectly.

‘So now there is nothing I can look back on and say, ‘I didn’t do this right, I didn’t do that right, that was my excuse’. There aren’t any excuses.’ Jimmy Tibbs’, Saunders’ fabled east-end trainer, has worked with British world champions such as Nigel Benn, Barry McGuigan, Charlie Magri and Chris Pyatt. He has often said that Saunders is better than any of them. Tibbs has, however, always insisted that his unbeaten charge would only attempt to join that clutch of esteemed fighters by claiming the world title once he was completely ready.

Now, seven years since he turned over, Saunders’ run to 22-0 has been punctuated by the British, Commonwealth and European middleweight titles. He also became the first traveller to win the British title outright when he successfully defended the Lonsdale belt for the third and final time in his high-profile money fight with Chris Eubank Jr last year.

Tibbs, his promoter Frank Warren and Saunders himself are now all confident that everything is in place to add a world title to his collection.

Saunders said: ‘I never really did say I want to be world champion in another ‘X’ years. I always said I want to fight for a world title when I am 26, 27, that’s what I said. Now I am 26.

‘I wanted to be that little bit more mature. I didn’t want to just go in there, win it and then get beaten. I want to keep it and I’m not scared of anybody at middleweight.’

Despite his heartbreak in China, Saunders has turned it around to become one of the most successful members of that talented seven-man squad which eventually represented Team GB in 2008 after Frankie Gavin missed the weight.

Light-welterweight Bradley Saunders has had bad trouble with his hands and was disqualified in a stay-busy eight-rounder in September while light-heavyweight Tony Jeffries had such terrible hand injuries he was forced to retire after just 10 professional fights. He now runs two successful boxing gyms in Los Angeles.

The career of Beijing bantamweight Joe Murray, currently 15-2, has stagnated and he has not boxed since February when he was stopped inside five rounds by Liam Walsh in his challenge for the British and Commonwealth super-featherweight titles. Saunders says, as a teenager, he brought the defeat on himself but now he’s a more mature competitor

Super heavyweight, and captain of the team in China, David Price was tipped as a potential long-term king of the heavyweight division but he has considered retirement after being badly knocked out by Erkan Teper in July.

The flyweight, Khalid Yafai, since turning professional has captured the British super-flyweight champion and is widely expected to go on to challenge for world honours.

But so far the only man from that team to become champion of the world is James DeGale, the middleweight gold medalist in Beijing, who is now the IBF king up in the 168lb super-middleweight division.

And Saunders, who is bidding to join him at boxing’s top table later this month, thinks his old friend from Harlesden will unify the titles to become the undisputed champion following his successful first defence against Lucian Bute.

Saunders added: ‘I think people have forgotten about his performance a bit because unfortunately for him, he boxed on the same night as Tyson Fury. ‘He loves pressure. To go to Canada and do that to Bute, you have to take your hat off to him. He’s a really good fighter and he won’t be a flash in the pan, he’s going to keep it going.

‘All the tools are there for DeGale, as long as he turns up he’s going to be a tough cookie to beat. I think he’s going to unify the division now.

‘Given Andre Ward has moved up, the champions at his weight are Badou Jack, Arthur Abraham and Fedor Chudinov. In my personal opinion, DeGale beats all of them within a month.

‘He was always talented, now he’s showing it. He’s come a long way since the Olympics and so have I. Now it’s my time to win that world title.’ Suddenly, seven years in boxing seems like a very long.