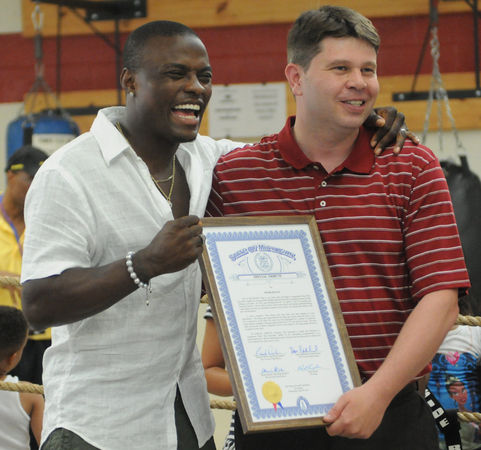 GRAND RAPIDS, MI — As the freight train of boxing power players involved in the Floyd Mayweather and Saul “Canelo” Alvarez press conference steamed into town and then out again on Wednesday, one world champion remained in Grand Rapids, looking to give back to the community he grew up in.

WBO Middleweight Champion Peter Quillin was honored by the state and city in a short ceremony inside a boxing ring at Up and Out Fitness on Grand Rapids’ southeast side. From left: WBO Middleweight champion Peter Quillin shakes hands with State Representative Brandon Dillon during a presentation at the Up and Out Gym in Grand Rapids Wednesday. (Cory Olsen | MLive.com)

State Representative Brandon Dillon shared a special tribute from Gov. Rick Snyder and the state which read, in part: “A fierce competitor, Peter brings more than hard work and readiness to each performance…His poise under the pressure of intense competition serves as an example to all young people striving for recognition in any sport.” “I can’t even put words to how I really feel,” Quillin said. “It’s a blessing to be able to come back here and get love back from your home town. It gives me a good feeling as well to try to give back and spread a healthy and positive message.”

Quillin shared that message with Grand Rapids youth Wednesday evening at the Hispanic Center of West Michigan and will continue to interact with youngsters on Thursday and Friday, delivering motivational speeches at the Paul I. Phillips Boys and Girls Club from 10:30 a.m. – 11:30 a.m. Thursday, and the Grand Rapids Initiative for Young Leaders Friday from 10:30 a.m. – 11:15 a.m.

He will also be recognized by the Grand Rapids Public Schools as an “Outstanding GRPS Alum” at a benefit at the Richard APP Art Gallery Thursday evening.

“I want to make sure I’m occupying my time being productive while I have this belt,” Quillin said. “I’ve been trying to change myself for the better. I need to keep a good, positive support structure around me, faith in God and keep working hard.”

As a group of young children held onto the ropes of the boxing ring he was speaking out of, Quillin shared his hopes for the youth of Grand Rapids.

“People will say ‘man, you’re living the life,’ but not in that kind of way,” Quillin said. “I’m living the life that was sent to me, I’m adding onto that by trying to be a positive role model and doing the best that I can. I learned something in church that says ‘doing less than your best is never good enough but doing your best is always good enough.’ So I’m just trying to do my best. I never said I have all the skill in the world but I do have a lot of effort.”