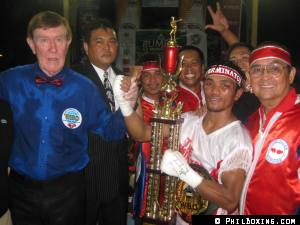 Both fighters went toe-to-toe from the opening bell the with wicked body shots and hooks to the head with the southpaw Albaracin getting the better of the exchanges.

The champion dropped Tampus twice in the third round although one of the knockdowns called by referee Danrex Tapdasan was questionable since Tampus appeared to lose his balance after missing with a wild left hook.

In the fourth round Albaracin battered Tampus with a three-punch combination that sent the challenger through the ropes onto the ring apron where Panamanian boxing writer and fight fan Carlos Costa and ABC 5 public relations man Paul Mata were taking pictures of the action.

The end came in round five when Albaracin dropped Tampus with vicious left hook and then dropped him once more, this time with a right hook and a grazing left. Tampus was in no position to continue as referee Tapdasan counted him out at 1:56 of the round.

There was a minor controversy over 21-year-old Johnreil Casimero’s TKO win over TI Yamagata Roemart Sentillas when Sentillas’ corner claimed that Casimero, a former WBO light flyweight interim-champion, delivered a hard right after the bell had sounded.

However, a review of the AKTV IBC Channel 13 video showed that Casimero caught Sentillas as the bell sounded which was the ruling by Games and Amusement officials supervising the bout.

The moment Sentillas went down really hard GAB medical personnel rushed into the ring to help him and according to Dr. Rene Bonsubre who is also a writer for philboxing.com said Sentillas told GAB physician Dr. Jose Unabia that he did not want to continue fighting.

Casimero who improved his record to 15-2 with 9 knockouts is on the comeback trail and recently served as sparring partner of former WBO light flyweight champion Ramon “Principle” Garcia Hirales whose trainer Leo Camacho was impressed by Casimero and predicted he would become a world champion if he trains in Mexico where there are a variety of excellent sparring partners.

Casimero who dropped a twelve round split decision to Garcia Hirales in a WBO interim light flyweight title defense on July 24, 2010 had won the interim crown with a sensational 11th round TKO of Colombia’s KO artist Cesar Canchilla (28-2, 22 KO’s) , dropping him once in round 8 and twice in round 11.

However, in his previous fight Casimero suffered a setback when he lost by a 5th round TKO top IBF flyweight champion Moruti Mthalane in South Africa on March 26 this year.

Another sparring partner of Garcia Hirales, Jason Canoy, knocked out Erwin Pulvera at 1:12 of the first round with a series of vicious hooks to the ribs. The official end came at 1:12. Canoy is another fighter that Camacho predicted had a big future and expressed interest to promoter Sammy Gello-ani of taking both Casimero and Canoy to train for one year in Mexico.