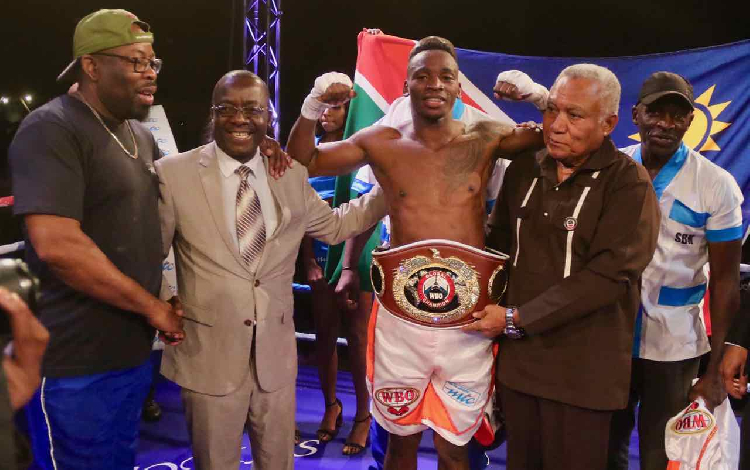 The much-anticipated fight between two WBO top 15 rated boxers in the junior lightweight division delivered beyond expectations when Jeremiah Nakathila took on Zoltan Kovacs for the vacant WBO Global title.

Nakathila dominated the fight from the first round, hitting Kovacs with some powerful punches and flooring him in the first round. Kovac beat the count and continued suffering heavy punches combined with great speed from the more supreme Nakathila fighting in front of his fans.

The referee finally stopped the fight to protect a clearly bruised and hurt Kovacs, 1 minute and 20 seconds within the 8th round. In the 3rd and 5th round, Nakathila had the Hungarian on the ropes defenseless and the referee could have stopped the fight much earlier.

The win sees Nakathila improve his record to 18 wins with 14 coming by KO and only 1 loss.

Trainer and promoter, Nestor Tobias from the MTC Nestor Sunshine Promotions was impressed with the win.

“We needed to challenge a top 15 contender to show that we are serious about fighting Ito, the current champion. We extended an invitation to all the top guys in the division and only Kovacs was willing to face Nakathila. It only makes sense that Nakathila now be declared the mandatory challenger to Ito and get an opportunity to challenge Ito next. Our goal is clear, we want to challenge Masayuki Ito for his title.”

“This was tough fight but one I needed to prove that I am amongst the best in this division. I feel 100% ready to fight Ito now whether home or away. I am mentally and physically ready to fight him, and I wish to formally challenge him to fight me next,” said Nakathila right after the fight.

In the main undercard, WBO Africa Welterweight champion and WBO rated number 7, Mikka “Silent Assassin” Shonena KO’d Shadrack Ignas from Tanzania in the 4th round to improve his unbeaten record to 14 straight wins. Shonena wasted no time when he overpowered the Tanzanian with beautiful punches to finish off the fight in style.