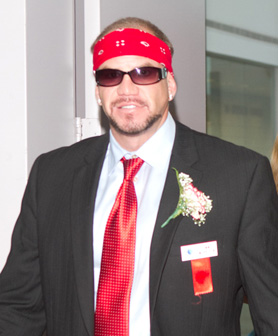 “Tommy Morrison brought so much excitement and energy to the heavyweight division in the 1990s,” said Hall director Ed Brophy. “We were saddened to learn the news of his passing and we offer our condolences to the entire Morrison family.”

Outside of the ring he gained additional fame starring opposite Sylvester Stallone as “Tommy Gunn” in Rocky V.

Morrison was a frequent visitor to Canastota for the annual Hall of Fame Weekend.

“’The Duke’ was extremely popular and whenever he came to the Hall fans loved the opportunity to be around him,” said Brophy. “And Tommy was very gracious with his fans, always happy to talk about his career, sign an autograph or pose for a photo.”

Below are a few snapshots of Morrison during his visits to “Boxing’s Hometown.”