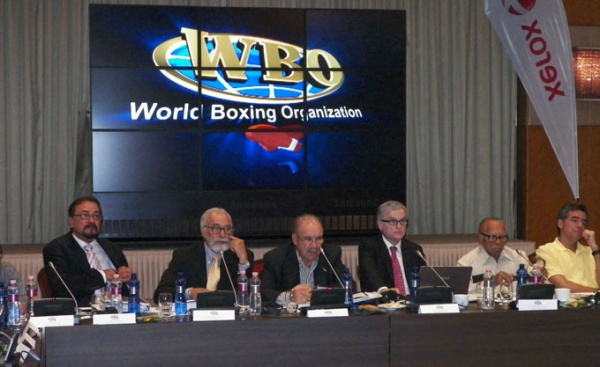 Story and photos by David Finger

The 26th Annual WBO Congress in Budapest, Hungary came to a conclusion yesterday with the ever popular final day event: the Championship and Ratings committee meetings.

The final day’s events kicked off as President Francisco “Paco” Valcarcel and the board entertained motions from the floor from various promoters in regards to their fighters. Although there was little movement in regards to the lighter weights President Valcarcel confirmed that mini-flyweight champion Merilito Sabillo of the Philippines is slated to fight #1 ranked Carlos Buitrago of Nicaragua in Dubai in November. At 108-pounds it was confirmed that junior flyweight champion Donnie Nietes of the Philippines is cut and will be sidelined for a short period of time. #1 ranked Moises Fuentes of Mexico is slated to fight for a International title, a move that will certainly position him for the mandatory slot when Nietes recovers from his cut. At flyweight President Valcarcel and the board confirmed that Mexican champion Juan Francisco Estrada will need to fight a mandatory defense in his next fight. Promoter Fernando Beltran requested that the winner of the November 7th matchup between #1 ranked Giovani Segura and #2 ranked Hernan Tyson Marquez, both of Mexico, declared the mandatory challenger for the champion. The board unanimously agreed.

At junior bantamweight champion Omar Narvaez of Argentina, who is coming off a split decision victory over #1 ranked Felipe Orucuta of Mexico is slated to fight in February. No word on if it will be a rematch of his war with Orucuta, who looks poised to remain at #1. Dean Powell pushed to have Paul Butler (the #13 ranked fighter) move into the top ten after his next fight on September 21st. Butler is slated to fight undefeated Miguel Gonzales for the vacant WBO Intercontinental title. The board seemed receptive to the idea of Butler moving into the top ten if he were to defeat Gonzales. At bantamweight President Valcarcel confirmed that new champion Tomoki Kameda would have six months to fight his mandatory defense as he only recently won his title.

At junior featherweight the discussion was in regards to champion Guillermo Rigondeaux and his first defense. Jesse Magdaleno (the #8 ranked NABO Youth champion) and the #1 contender Chris Avalos (the NABO champion) were both mentioned as Top Rank pushed to have their fighters positioned into a title fight. A big round of applause followed for former world champion Barry McGuigan, who was there to represent undefeated British prospect Carl Frampton (16-0). Frampton, who is ranked #14, now looks poised to enter the top ten.

At featherweight the big discussion was over the fight between #1 ranked Orlando Cruz and #3 ranked Orlando Salido. That fight, which is scheduled to take place on October 12th for the vacant world title. There was a push to introduce Oscar Gonzalez (23-2) into the world rankings based on his impressive win over Rico Ramos as well as a push for undefeated Filipino prospect Jun Doliguez (16-0) to move up the ranks. Doliguez is ranked #9. The next discussion was over a fighter who is quickly becoming the most talked about rookie in recent memory: debuting amateur standout Vasyl Lomachenko. Lomachenko, who is slated to fight tough Jonathan Oquendo in his first pro fight, now will be fighting Oquendo for the vacant WBO International title. Despite some concern over allowing a debuting fighter to fight for a WBO belt, the board was nearly unanimous in recognizing what a unique and special talent Lomachenko is.

“Thank God there was no Lomachenko in my division at the time,” former Olympic gold medalist Istvan “Koko” Kovacs said, “I never saw a fighter like him before.”

The board approved Lomachenko for the title fight, making his planned world title fight in his second professional fight a more realistic scenario assuming he can get past the seasoned Jonathan Oquendo. Representatives for #5 ranked Chonlatarn Piriyapinyo of Thailand asked to have their fighter move up the ranks after the planned clash between the # and #3 ranked contenders.

At junior lightweight the WBO confirmed it was issuing a letter to champion Roman Martinez of Puerto Rico, informing him that he now has 30 days to begin negotiations for a fight with #1 ranked Miguel Angel Garcia.

In the lightweight division it was confirmed that champion Ricky Burns would fight #6 ranked Raymundo Beltran on September 7th. From there the board confirmed that Burns would need to begin negotiations with Terrence Crawford, the #1 contender, by December. Undefeated Denis Shafikov of Russia looked poised to move up as well from the #3 slot. In a bit of a shocker, promoter Fernando Beltran told the board that #12 ranked junior welterweight Jose Zepada was now moving down in weight to campaign at lightweight.

In the junior welterweight division the board voted to approve allowing Juan Manuel Marquez to enter the ring against Tim Bradley as WBO champion on October 12th. Mike Alvarado would then be declared the full champion after October 12th. A request to move #3 Serhiy Fedchenko up also came from the floor.

In the welterweight division Dean Powell asked to have #8 ranked Frankie Gavin move up in the ranks as he is slated to fight on September 21st for the European title. In junior middleweight some controversy arose over the next fight of #4 ranked Brian Rose. Both Charlie Ota of Japan (who is ranked #11) and Javier Maciel of Argentina (who is ranked #5) appeared to have an fight against Rose at the same time. After a round of phone calls it was confirmed that Rose would be fighting Maciel and not Ota in his next fight. Fernando Beltran also asked to have Omar Chavez, son of Julio Cesar Chavez, enter the world rankings. Dean Powell asked to have Liam Smith, who is challenging for a British title, move into the world rankings as well.

At middleweight it was confirmed that #1 ranked Brian Vera (the NABO champion) was slated to fight #2 ranked Julio Cesar Chavez Jr. on September 28th. Champion Peter Quillin is slated to fight on October 26th. Several promoters moved to have their fighters positioned for an elimination fight as the Vera-Chavez fight created an opening for other fighters looking to move up in the rankings. #4 ranked Lukas Konecny of the Czech Republic and #5 ranked Max Bursak of the Ukraine look poised to emerge as the frontrunners to take part in an elimination fight. #15 ranked Patrick Neilsen of Denmark looks poised to crack into the top ten as well.

At 168-pounds there was a push to move Paul Smith into the rankings. #4 ranked Arthur Abraham looks poised to move into the #1 slot off the basis of his win last week. WBO champion Robert Stieglitz is slated to fight in October, and may end up fighting a rubber match with Abraham after that. When asked is Stieglitz would be willing to fight Abraham in a mandatory, Hedi Taouab indicated he would be.

“It’s for the WBO to decide,” Taouab said, “we are ready to negotiate and talk.”

Arthur Abraham was subsequently voted into the #1 ranking by the board.

At light heavyweight champion Sergey Kovalev has 120 days to defend his title. #13 ranked Erik Skoglund of Sweeden is slatefd to gfight #14 ranked Dominic Boesel of Germany in a rare WBO youth unification fight. At cruiserweight Marco Huck is slated to fight #1 ranked Firat Arslan on September 14th. #7 ranked Mateusz Masternak of Poland is slated to fight #14 ranked Grigory Droz of Germany on October 5th and wants to move up in the rankings as well. At heavyweight the discussion was over WBO champion Wladimir Klitschko’s 27-month gap since he fought a WBO mandatory challenger. With Klitschko fighting Alex Povetkin on October 5th, there was an issue over the fact that, according to President Valcarcel, the top ranked contenders of the WBO didn’t meet the “criteria for a mandatory”. #1 ranked Denis Boytsov is now slated to fight #11 ranked Christian Hammer. With #2 ranked Bermane Stiverne now the WBC mandatory for Klitschko it did look likely that Boytsov’s long wait may be over and the WBO may award him the mandatory slot if he emerges victorious over Hammer. There was a push to have #5 ranked Deontay Wilder fight for the vacant NABO title as well, and a push to have #13 eanked Andy Ruiz move up into the top ten. Dean Powell also pushed to have #15 ranked Dereck Chisora move up into the top ten on the basis of his knockout win over undefeated Malik Scott.

“His losses have been only at the highest level,” Powell said, “and some are very controversial.”

WBO Vice President Leon Panoncillo pushed to have Alex Leapai versus Andy Ruiz for the WBO Asia Pacific and WBO Oriental championship in Macao in November as well.

From there several awards were handed out, with Liam Welch being awarded the European fighter of the year award, Tia Yi being awarded the matchmaker of the year for China, and the Sports Management Group being awarded the Promoter of the Year. The Japan Boxing Association presented a letter to the WBO and Mario Margossian was awarded a special recognition award. The location of the 2014 and 2015 conventions were decided as well, with Las Vegas, Nevada being the host to the 2014 convention, with Puerto Rico as the backup. In a bit of a surprise, the Philippines will be the location of the 2015 Convention , with Cebu and Manila as the most likely venues.