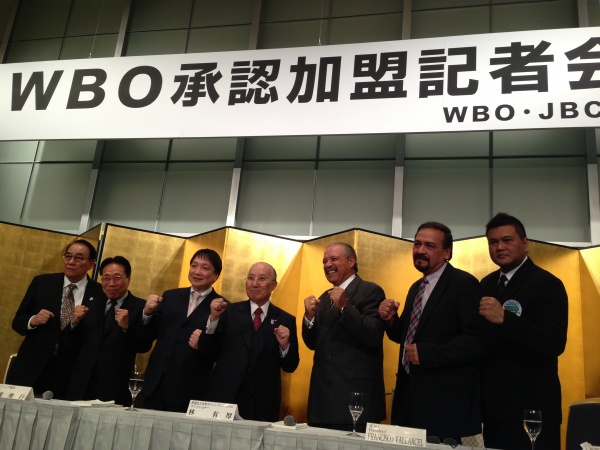 World Boxing Organization president Francisco “Paco” Valcarcel has credited Filipino world champions for helping get the WBO to be finally recognized in Japan.

In an overseas telephone conversation with the BoxingScene.com/Manila Standard, Valcarcel said “that with all the Filipinos fighting around the world it helped a lot because it wasn’t easy to enter Japan.”

He extended the WBO’s gratitude to businessman-sportsman and boxing promoter Akihiko Honda and Mexican promoter Felix “Tito “ Zabala for their help and disclosed that “they are very close to us and we worked like undercover” for the past five years.

He said now that the WBO can have world title fights in Japan there will be more opportunities for Japan to finally have WBO world champions because “its not easy for them in Mexico and the Philippines but now they can promote fighters like Nietes, (bantamweighty champion) Pyungluang Sor Singyu who will defend his title in Namibia and all the other big names.”

Valcarcel who will be in Macau for the blockbuster Top Rank promotion on April 6 said his first big plan is “to  work to have some Japanese fighters in Macao” and that he would meet with Japanese promoters today because they want to participate and can make good offers for champions to come here (to Japan) and fight.”

He also commended WBO Asia Pacific vice president Leon Panoncillo for his work in the region and revealed he was “shocked because everybody, especially the promoters, knew and liked Leon.”

Article Link –  http://www.boxingscene.com/?m=show&opt=printable&id=62495#ixzz2LLIkzdjn
This is a legal waiver. By copying and using the material from this article, you agree to give full credit to BoxingScene.com or provide a link to the original article.