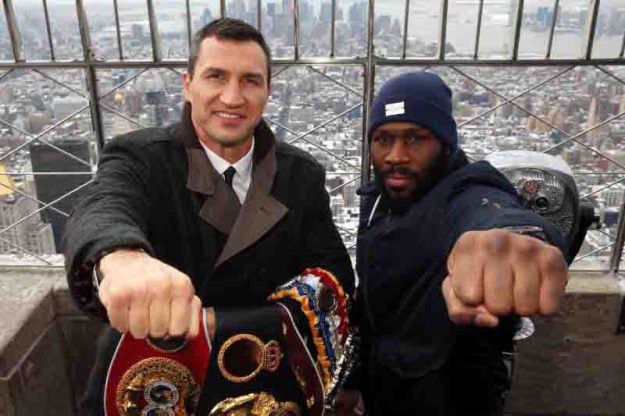 Said Klitschko about the highly anticipated battle, “I do have great respect for Bryant Jennings and his achievements. He has good movement in the ring and good technique. I know this will be a tough challenge.”

“I am extremely happy to fight in New York City again. I had my first unification fight there and a lot of great heavyweight matches have taken place at Madison Square Garden. It will definitely be a great fight night and I will do everything for it from my side.”

Stated undefeated contender Jennings, “This is the moment I have been waiting for,” now it’s time to bring the belts home.”

“For the fourth time Wladimir will be boxing in the world’s most famous arena.” said BERND BOENTE, CEO of the Klitschko Management Group. “It’s always something special to promote at Madison Square Garden, where legends such as Joe Louis, Muhammad Ali, Joe Frazier, Lennox Lewis and Evander Holyfield stood inside the ring. We are looking forward to another exciting fight and a great event.”

Continued TOM LOEFFLER, Managing Director of K2 Promotions: “Wladimir has proven to be the most dominant heavyweight champion in recent history and we are looking forward to another great performance on April 25.”

“We’re proud to present Jennings with the opportunity to win the Unified Heavyweight Title of the World,” said GARY SHAW, head of Gary Shaw Productions

“On April 25th at Madison Square Garden, Wladimir Klitschko defends his heavyweight championship for the first time in the United States since 2008,” said Peter Nelson, vice president, programming, HBO Sports. “Heavyweight is boxing’s supreme glamour division, and its champion could not be a better ambassador to the sport in a career heading toward historic landmark achievements. Bryant Jennings has an opportunity to halt those ambitions and become America’s first unified heavyweight champion in more than 13 years, challenging for the crown in the media capital of the world. HBO is thrilled to present the event live on our flagship World Championship Boxing series.”

“It is an honor to host the World Heavyweight Championship at Madison Square Garden and welcome back Wladimir Klitschko, who last fought at The Garden in 2008,” said Joel Fisher, executive vice president, MSG Sports. “Throughout our 135 year existence, The Garden has hosted the very best in sports and entertainment, and to bring the World Heavyweight Championship back so our passionate boxing fans can see Bryant Jennings challenge for the heavyweight title is a moment not to be missed.”

Holder of the IBF/WBA/WBO/IBO and “The Ring Magazine” world titles and undefeated over the last ten years, Klitschko returns to Madison Square Garden for the fourth time sporting a record of 63-3-0 (54KO’s).

On November 15, Klitschko scored a fifth round knockout over #1 ranked contender Kubrat Pulev in Hamburg, Germany. Looking as dominant as ever during his illustrious career, Klitschko dropped the heavy handed Bulgarian four times in front of a sold out crowd at the 02 World Arena.

Returning to HBO® for his third straight fight, Philadelphia native Jennings has compiled a record of 19-0-0 (10KO’s) over his five-year professional career.

Making his HBO and Madison Square Garden debut on January 25, 2014, the 30-year-old Jennings devastatingly stopped undefeated Polish contender Artur Szpilka in the tenth and final round.

Following up on his knockout victory over Szpilka, Jennings won a 12-round unanimous decision over top contender Mike Perez on July 26, 2014 setting up the showdown with Klitschko.