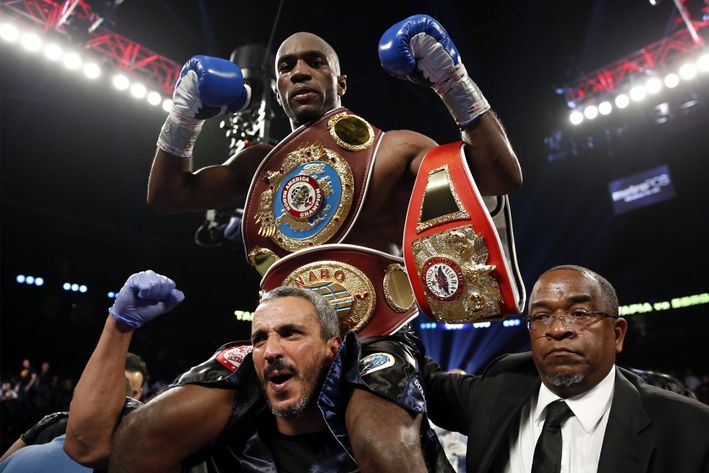 Michel Soro went to enemy territory and stopped the hometown fighter, while Seanie Monaghan stayed unbeaten in the co-feature.

After a quick start in round one, Glen Tapia got figured out, and Michel Soro wound up stopping the hometown fighter tonight in Newark, scoring a TKO victory at 2:10 of round four on truTV’s Friday Night Knockout.

Soro (26-1-1, 16 KO) endured a rush from Tapia at the start of the fight, and by the second round seemed to have his opponent solved, as he began to land clean and hard counter shots, digging to the body at moments, and controlling everything behind his jab.

Tapia (23-2, 15 KO) struggled a bit with Soro’s movement, too, but he stayed active, throwing a lot of punches, though most of them were coming up well short. His body attacks when he did pin Soro to the ropes were fended off by Soro, who ate a lot of the shots with his elbows, and then was able to effectively fight or simply move out of any trouble.

The second and third rounds went to Soro, and in the fourth, he clipped an aggressive Tapia with a right hand that badly hurt the New Jersey native, sending him wobbling around the ring. He made his way to the ropes, where he kept attempting to grab and survive, but Soro would have none of it, and continued to land shots as he threw in bunches looking to put the fight away. A final left hook forced referee David Fields to stop the contest.

Soro, 27 and fighting out of France by way of Côte d’Ivoire, gets the biggest win of his career with this one, while Tapia, 25, takes a major step back. He’d won three straight after being mauled by James Kirkland in December 2013, but he looked a little outclassed in this one.

Seanie Monaghan stayed undefeated in the co-feature, surviving a late rally by Brazil’s Cleiton Conceiçāo to win on scores of 98-92, 98-92, and 99-91. BLH had it 97-93 for Monaghan (23-0, 15 KO), giving the final three rounds to Conceiçāo, a 2000 Olympian. truTV’s Ray Mancini had it 96-94 for Monaghan, and it’s pretty clear the scores were a bit wider than they should have been, but Monaghan definitely deserved the victory.