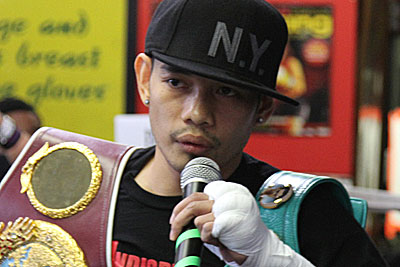 NEW YORK — Nonito Donaire is probably a few wins away from a potential showdown with Yuriorkis Gamboa becoming a realistic possibility.

And as Juan Manuel Lopez’s upset loss to Orlando Salido reminded us earlier this year, that’s entirely too far down the line to start getting all that excited about a Donaire-Gamboa bout. But count Donaire among those that hope the intriguing matchup materializes.

“The Filipino Flash” has watched Gamboa’s development closely and is eager to test himself against an unbeaten boxer Donaire considers special, yet flawed.

“He’s an amazing fighter,” Donaire said. “He has speed, power. I’ll be excited if I get the opportunity, because he’s a good fighter. I see a lot of flaws, but sometimes you see flaws and you can’t react to it. It’s different in that ring.

“But I’ve seen some flaws in him, something I can take advantage of. It’s ‘The Cyclone’ versus the ‘The Flash.’ We’ll see who’s faster, but I think ‘The Flash’ can take cyclones all day.”

Even if the Cuban-born Gamboa (21-0, 16 KOs), a Miami resident, and Donaire (26-1, 18 KOs), a native Filipino who resides in San Leandro, Calif., continue winning, getting them in the same weight class could become an obstacle.

Donaire intends to move up from 118 to 122 pounds if he wins against Argentina’s Omar Narvaez (35-0-2, 19 KOs) on Saturday night in New York, but Gamboa said after defeating Daniel Ponce De Leon (41-4, 34 KOs) on Sept. 10 in Atlantic City that he’s moving up from featherweight to at least 130 pounds in his next fight. Gamboa didn’t rule out an immediate move to lightweight, either, which would separate him and Donaire by three weight classes.

The 28-year-old Donaire doesn’t think, however, that an eventual move to lightweight will be problematic.

“I’m definitely growing,” said Donaire, who stands 5-foot-7, an inch taller than Gamboa. “[In late August] I was at 147 and I wasn’t fat. If given the opportunity to put some weight on, it’ll be easy for me to do it.” 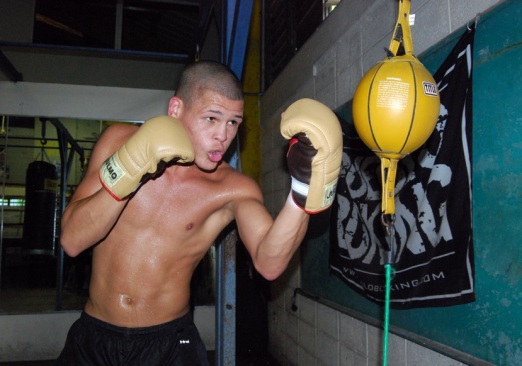 The WBO Latino Jr. Lightweight and undefeated Luis “El Artesano” Cruz stated today that he is physically fit, just days before his showdown against Antonio Davis. The fight will be the co-main event for the clash between Yuriorkis Gamboa and Daniel Ponce de León, this coming Saturday, September 10th, at Boardwalk Hall in Atlantic City, NJ.

“I am in excellent physical condition for this next fight. I prepare very well for all of my fights, but since I was crowned Latino champion, each engagement is more challenging and more difficult. So we have worked hard for this one”, Cruz stated after finishing a workout for the media in the Caimito Gym in San Juan.

Cruz (18-0, 14 KOs) is focused on securing a convincing victory over Davis (28-6, 13 KOs), an experienced and seasoned fighter, a native of Atlanta, Georgia.

“I want to make a good impression in my victory this coming Saturday in Atlantic City. From now on every fight means a lot and I will be in the center of many eyes. I will be crowned world champion. I will beat Davis convincingly. I have trained with my trainer Freddy Trinidad and we have a good strategy,” predicted Cruz.

On his experience fighting at 130 pounds, Cruz emphasized once more that he feels stronger.

“I can tell you that I feel stronger and faster at 130 pounds. I make my meals normally but with smaller portions”, stated Cruz, who began his career at 126 pounds. Cruz finally talked about his future after this fight.

“The first step now is to beat Davis strongly. We should be back in the ring on November 12 on Pacquiao-Marquez 3, which is good for me because I will be seen on a mega fight card with a great opportunity for the fans to see me in action. I am a few steps away from being crowned world champion and I want to thank my promoters Miguel Cotto Promotions and Top Rank,” he concluded.

“El Artesano” will leave for Atlantic City with his team this coming Wednesday, September 7th on a U.S. Airways flight at 8:45 am.