Terry Flanagan Will Be Aiming To Knock Petr Petrov Out 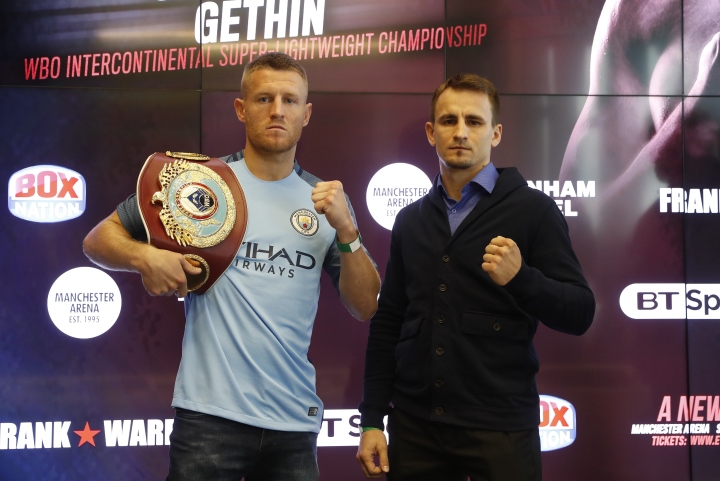 Man City fanatic Terry Flanagan wants to emulate his boyhood hero Ricky Hatton by fighting at the home of the Manchester giants. Undefeated Turbo tops an unmissable evening of action when he defends his crown against Petr Petrov at the Manchester Arena on Saturday 8th April, live on BT Sport and BoxNation.

WBO Lightweight boss Flanagan, 32-0-0 13 KO’s, was a special guest at the Etihad yesterday, addressing the 54,000 strong crowd before City battled to an entertaining 1-1 draw with Premier League rivals Liverpool.

The 27-year-old from Ancoats became Manchester’s first World Champion since Hatton with his third-round TKO victory over Jose Zepeda back in 2015 and knows he must get past the dangerous Petrov if he is to secure huge unification showdowns with the likes of WBA Champion Jorge Linares and WBC kingpin Mikey Garcia.

“Fighting at the Etihad would be a dream come true,” said Flanagan. “I grew up as a huge Ricky Hatton fan and there was always a special atmosphere at his fights. The Manchester public bring that special atmosphere and I want those big nights that he had.

“Every time I’ve boxed in Manchester I’ve got a knockout win and I’m aiming to carry that on next month. It’s going to be a big test but one that I’m going to step-up to and deal with. If I’m not on my game he’s a potential banana skin. I have to win this if I want those big unification fights later in the year

“Having thousands of fans cheering me on gives me and real boost and I hope you can all turn out and get behind me on April 8th. I’m looking to make a big statement and I want as many of my fans in there to see it as possible.”