Juan Carlos Burgos: Cruz Thought it Was an Easy Fight 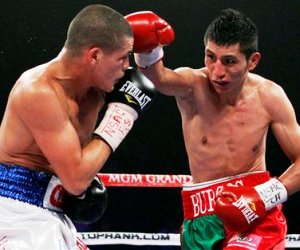 WBO Latino featherweight champion Juan Carlos Burgos told The Boxing Lab, BoxingScene.com’s official audio show that he feels that Luis Cruz overlooked him in their fight this past Saturday in Las Vegas, Nevada.  Burgos, who moved up to 130 pounds for the fight, feels the Puerto Rican fighter was already looking ahead to future fights including a potential title shot.

“They thought it was going to be an easy fight. They didn’t give me any credit. At the press conference they said they would be a champ in 2012. This was a very big fight for me,” Burgos told The Boxing Lab’s Ernie Gabion.

Burgos said that they formulated their game plan based in part on Cruz’s fight versus Martin Honrio that took place this past April.

“We saw his fight before with Honorio and he was hitting him with a lot of left hooks so that was our strategy. After I hit the hooks early on he didn’t have as much movement so I knew the hooks were working. We were using them from the head to the body,”. Burgos told The Boxing Lab.

Burgos said that they wanted to apply pressure on Cruz from the opening bell. Based on the Honorio fight, he didn’t think Cruz would be abe to withstand the pressure.

“Our plan was to pressure him from the opening rounds and that is what we did,” said Burgos.

Cruz started to come on late but it was a case of too little too late. When asked if he was tiring towards the end of the fight, Cruz responded by saying, “I wasn’t tired at all. I was in great condition. Early on I connected on Cruz a lot. My strategy was to move around later on to frustrate Cruz and make him make mistakes.”

After a fairly even first round, Burgos opened up in the second and stunned Cruz. Burgos dominated the third round, landing combinations and shaking Cruz up on more than one occasion. Cruz began to pick up the pace in the fourth. He was taking the punches better and started boxing smart with calculated counters in the fifth. By the seventh, Cruz’s right eye was swelling shut. The action was close in the late rounds, but Burgos had the slight edge due to his accurate punches and a good left hand that barely missed.