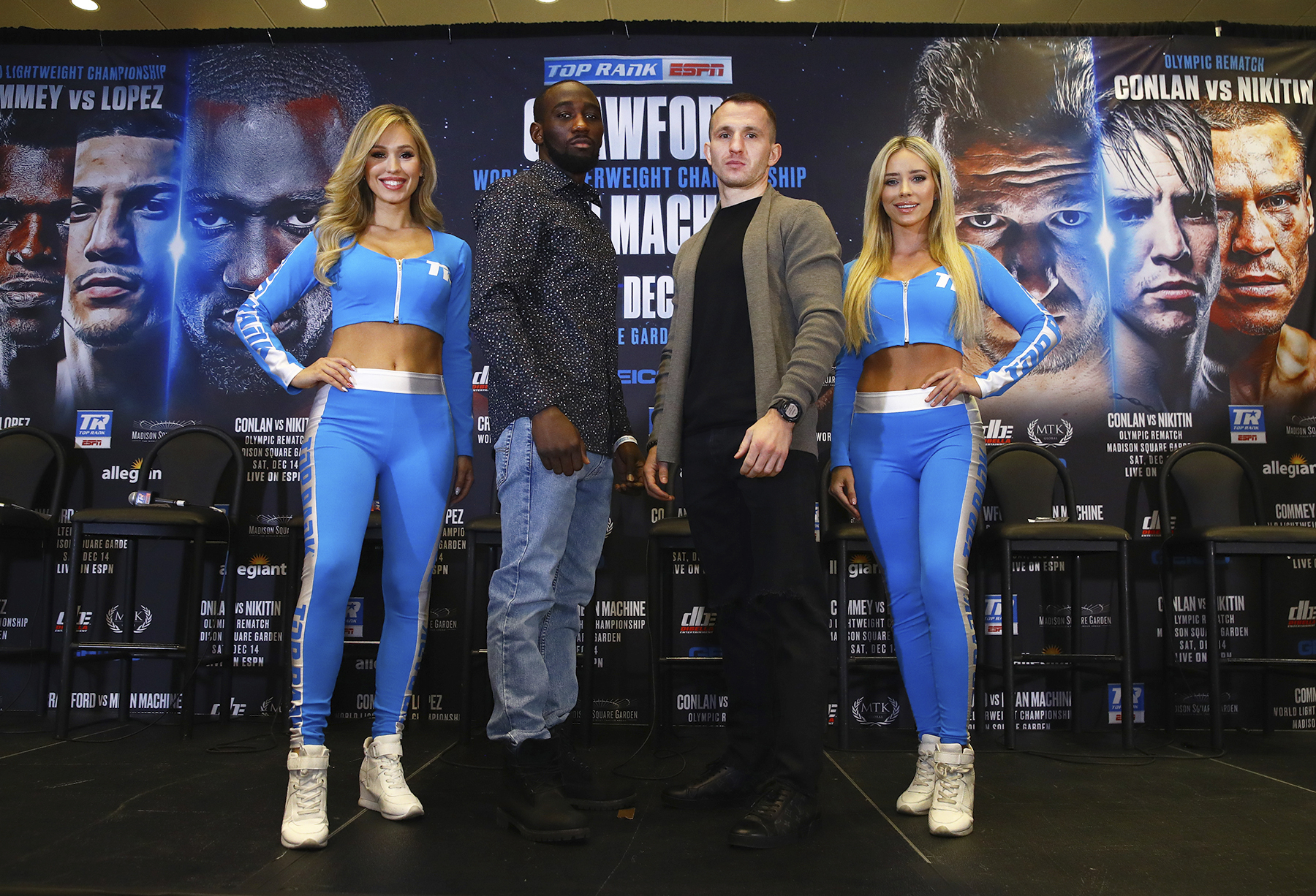 The ESPN opener will see Irish sensation Michael “Mick” Conlan (12-0, 7 KOs) hoping to turn back amateur nemesis Vladimir Nikitin (3-0, 0 KOs) in a 10-rounder at featherweight. Nikitin defeated Conlan twice as an amateur, including in their 2016 Olympic quarterfinal bout, a decision that sparked international controversy. “I’m starting to get used to fighting on these big stages, so it ain’t nothing new to me. This week is going to be a great, spectacular show. I am well-prepared for whatever he brings to the table, and I’m sure they know that as well.” “Nothing really changed between me and {trainer Brian McIntyre}. We’re a team. Iron sharpens iron. We added some more great fighters to the team. We’re pushing each other each and every day in camp. If I’m tired, {Maurice Hooker} will talk to me, ‘Come on little guy, you tired?’ And that just motivates each and every one of us to go that extra mile. Either we’re running, sparring, hitting the bag. Everything is a competition when we’re in the camp.”

“I’m not focused on no other opponent besides the opponent that’s in front of me. My goal is to make sure I get the victory come this weekend, and that’s the only person I’m focused on now. Anyone else is talk. It goes in one ear and out the other. He’s young, hungry and I’m not taking him lightly.”

“Crawford was on my mind from the start of training camp in June. So every day was Crawford, Crawford, Crawford. My mindset is good. I’m happy for this fight. When this fight was made officially, I was super happy. I was smiling all day. I want to fight the best, and we’re fighting in the Mecca of Boxing.” “We started {training} in June, but we started light. Still, all the tactics, everything was about how Crawford fights, which stance {he’ll use}. Sparring, we had lots of different guys, southpaw, orthodox, guys in different stances. And the training camp, [we worked on} speed, power, sparring, technique and tactics, all in this five, six months.”

“Going straight ahead to Crawford is not an option because he’s too smart and he showed in his last fight that he’s smart in the ring. So, yeah, we’ll work on my combinations. We don’t want to go very wild at him.”

“Some young man who has three of the lightweight titles and is looking to fight for a fourth will be on hand. He’s coming in on Friday to watch this match. Vasiliy Lomachenko will be here. A lot at stake in this Lopez fight with Commey. Both great fighters.” 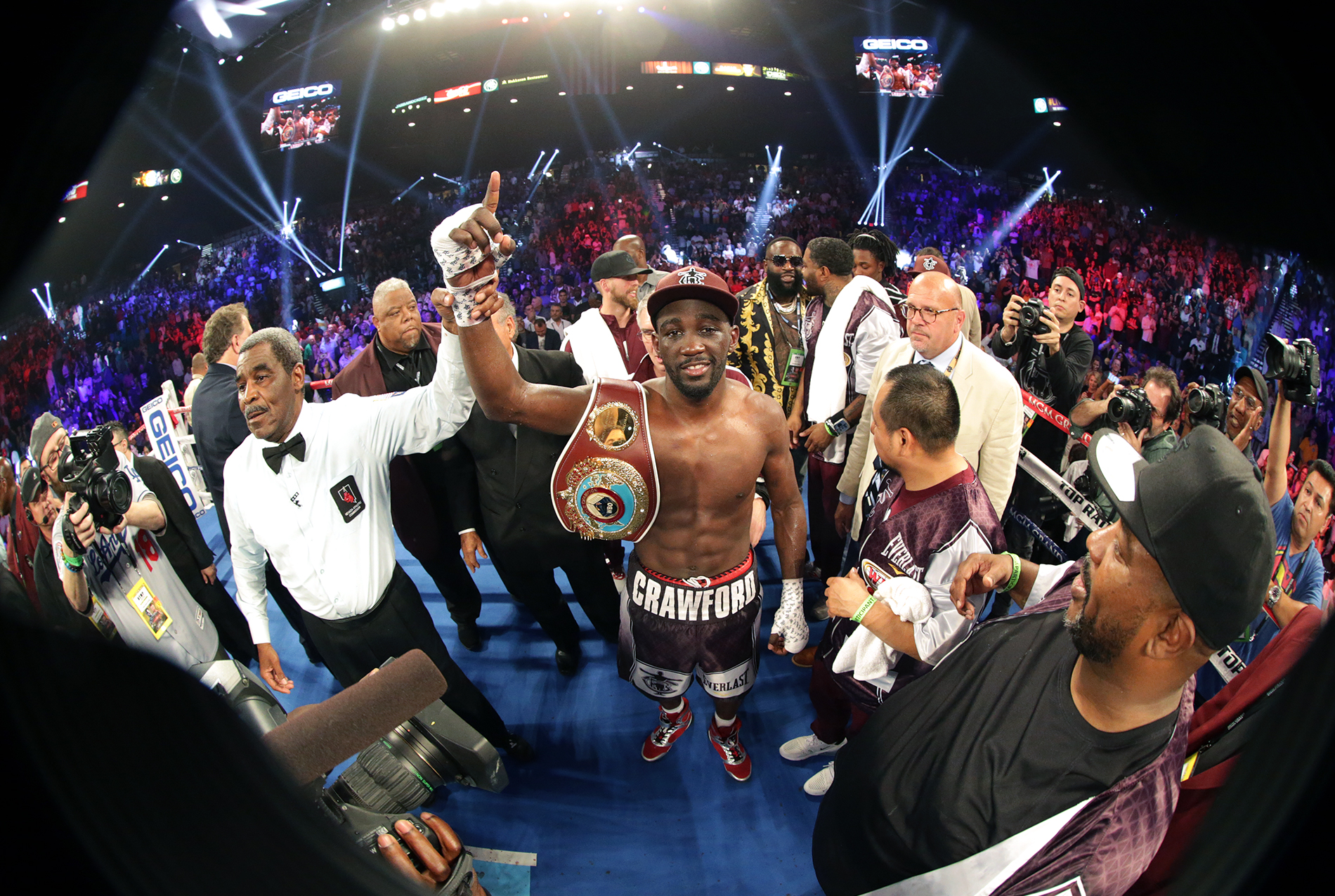 Promoted by Top Rank, in association with DiBella Entertainment and MTK Global, tickets priced at $506, $306, $206, $106 and $56 (not including applicable fees) go on sale Friday, October 18 at 12 p.m. ET and can be purchased at the Madison Square Garden Box Office, all Ticketmaster outlets, Ticketmaster charge by phone (866-858-0008) and online at www.ticketmaster.com or www.MSG.com.

“This is the best fight card of the year, and Madison Square Garden is a fitting venue for what will be a special night,” said Top Rank chairman Bob Arum. “Terence Crawford is a generational talent, but he’ll have his hands full against the ‘Mean Machine.’ Teofimo Lopez is taking a giant step up against Commey, and it will be a tremendous fight. Mick Conlan has been asking for Nikitin since the day he signed with Top Rank. He finally gets his wish, and I know he wants to correct the tremendous injustice of the Rio Olympics.”

“Egidijus Kavaliauskas is a two-time Olympian and I can’t take him lightly,” Crawford said. “He’s got everything to gain and nothing to lose and that makes him dangerous. I never overlook any opponent, and this will be no exception. I’ll be ready for anything and everything he brings on December 14 when I return to my second home, Madison Square Garden, and live on ESPN.”

“I have prepared my whole boxing career for a fight of this magnitude,” Kavaliauskas said. “Terence Crawford is an excellent fighter, but I fear no man. Nobody has seen the best of the ‘Mean Machine’ yet. I am going to shock a lot of people on December 14, but it won’t be a surprise to me. I earned this title shot. It is my time.”

Crawford (35-0, 26 KOs), the pride of Omaha, Nebraska, has been impeccable since turning professional, winning world titles in three weight classes and unifying all four major world titles at super lightweight. He is 13-0 with 10 knockouts in world title bouts and has knocked out his last six opponents, including Olympic gold medalist Felix Diaz, bitter rival Jose Benavidez Jr. and Manny Pacquiao conqueror Jeff “The Hornet” Horn. In his last bout, April 20 at Madison Square Garden, Crawford neutralized former unified super lightweight world champion Amir “King” Khan en route to a sixth-round TKO after Khan could not continue following a low blow. Kavaliauskas (21-0-1, 17 KOs) will be the fourth undefeated fighter Crawford has faced in his last five bouts.

A native of Kaunas, Lithuania, Kavaliauskas represented his homeland at the 2008 and 2012 Olympics, rising the professional ranks with convincing victories over perennial contenders Juan Carlos Abreu and Roberto Arriaza. Kavaliauskas has a February 2018 TKO win over David Avanesyan, who is now the current European welterweight champion. He has never been knocked down as a pro or amateur and trains out of the famed Boxing Laboratory in Oxnard, California.