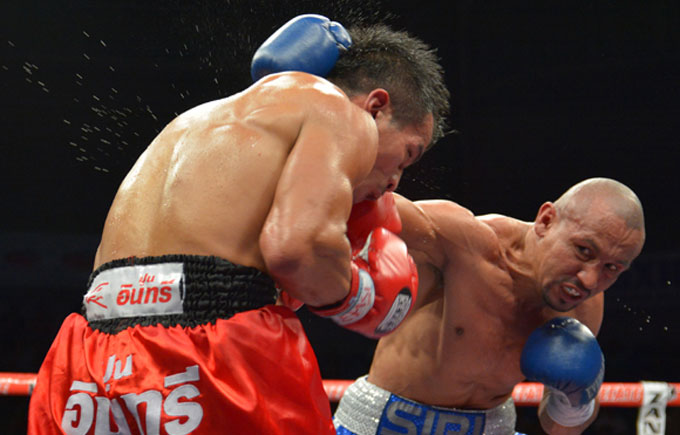 It was a wild-wild west affair last night at the Tijuana Municipal Auditorium as a total of twenty knockdowns, seven in the main event, were witnessed by a nearly sold out enthusiastic crowd. Two world titles were contested in an event presented by Zanfer Promotions and broadcast live by the Azteca channel in Mexico and BEIN Sports in the U.S. In the main event, former featherweight champ Orlando “Siri” Salido (42-12-2, 29KO) captured the interim WBO 130lb title with an eleventh round KO win over the tough as nails Terdsak Kokietgym (53-5-1, 33KO) in rough and tumble fight of the year candidate. Both men went down multiple times as they left it all in the ring in a fight that ignited the crowd and made Kokietgym a local hero for his display of grit and heart, two virtues Mexican fight fans love.

Salido lost his featherweight title in his last fight by coming in overweight in his fight against Vasyl Lomachenko last March. Salido gave Lomachenko a rude welcoming to the pro ranks as he beat him via a split decision. Salido quickly after announced his graduation to the 130-pound division with a direct shot at the interim title. The championship bout marked only the fourth time he traveled outside of Asia. The three times before he faced top-level opposition and came up short against Joan Guzman, Juan Manuel Marquez and Steven Luevano. His last loss was two years ago when he challenged Japanese Takahiro Ao for the WBC title.

The southpaw Kokietgym made his presence known early on with a right hook that dropped Salido in the first round but the Mexican out of Ciudad Obregon returned the favor a minute later with a hook to the body. Every punch thrown by both men was with bad intentions and as Salido looked to close the round he was hurt by a straight left flush to the face.

Salido began to score with uppercuts from either fist through the middle and coupling them with hooks in the second but near the of the round Kokietgym of Bangkok, Thiland, erased all the work by seating Salido on the canvas with another straight left. Not to be deterred, Salido continued with his constant pressure as Kokietgym, who seemed to hit a bit harder, countered with that straight that didn’t seem to miss. It looked that Salido had scored another knockdown in the fourth after landing a right hook but the referee Eddie Claudio called it a slip. Salido kept plugging along and before the end of the round he did score the knockdown near the end of the round.

Looking for the finish early in the fifth, Salido was put down by another straight left between the Mexican’s power punches. By this point it looked that Kokietgym was slowing down and Salido was warmed up as “Siri” pushed the fight with constant pressure. With Salido landing a number of punches and Kokietgym’s back against the ropes, referee Eddie Claudio jumped in and broke them up thinking the bell had rung. Salido’s corner began celebrating before Claudio was able to bring back order and ordered them to continue.

The tide changed in the last round and Kokietgym changed his strategy as he began to box from the outside instead of going head-on against Salido as he did in the first six rounds. It didn’t matter as Salido caught him against the ropes and landed a barrage of punches that dropped the Thai once again.

Kokietgym was now working on pure heart and determination while Salido landed head snapping uppercuts. A right hand snapped Kokietgym’s head back in the middle of the eight and in the ninth the Asian fought most of his round with his hounds down and moving around the perimeter of the ring.

The Thai had his second win in the tenth as he threw caution to the wind and brought the fight to Salido keeping the action up close and scoring good punches with Salido’s back on the ropes. Salido was able to counterpunch well but Kokietgym showed a granite chin until the next round when Salido scored a three-punch combo punctuated with a left uppercut that crumbled Kokietgym to the canvas. Referee Eddie Claudio didn’t administer a count and instead called for the ringside doctor. After some tense minutes, Kokietgym recuperated. Official time was :16 of the 11th round.

After the bout, most of the crowd made their way to the exits including the ambulance. Since a fight can’t commence with no medical personnel present, there was a forty-five delay for the walk-out bouts to get going.