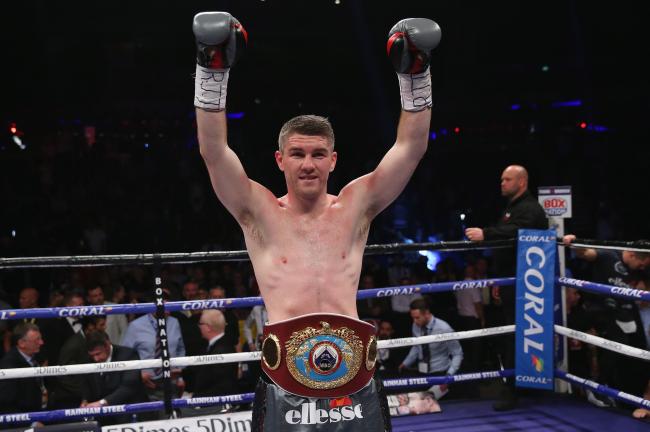 The champion wasn’t expected to have too many problems dealing with the unheralded Predrag Radosevic (30-2, 11 KOs) at the Echo Arena in Liverpool, England.

Sure enough, local lad Smith (22-0-1, 13 KOs) needed only four minutes and 34 seconds to see off the man from Montenegro.

In terms of a homecoming for Smith, who won the belt in nearby Manchester in 2015, it was over before it had barely begun. It was barely worth putting out the bunting.

Still, Bleacher Report has picked out some of the key talking points from the main event as well as the action on the undercard.

Radosevic always seemed to be nothing more than a sacrificial lamb.

The challenger had only lost once in his pro career. However, that defeat, against Felix Sturm in 2013, saw Radosevic dismantled inside four rounds.

Taking a leaf out of Sturm’s book, Smith broke down his rival by targeting the body early and often. When the first blow thudded into the Montenegrin, it quickly became obvious he was way, way out of his depth.

A left hook, landing just under the ribs, produced an early finish: Smith has now won eight on the spin inside the distance. He has become accustomed to breaking down opponents who, quite frankly, are beneath him.

The reason why opponents eventually buckle is his relentless work to the body. Allow him to get in close and you better be prepared to suffer.

Another impressive performance from Liam Smith last night. What a superb inside fighter he’s become. Tremendous variety on the inside

@LiamBeefySmith showing again last night how vicious he can be! A brilliant box fighter an a serious body puncher! Well done champ #AndStill

Now Smith needs to find out if the same tactics can work on a higher calibre of fighter.

Smith needs to face a big name. That is stating the obvious.

He’s had 24 bouts as a pro, but now, as a world champion, he is desperate to make every fight count. This is his time to not only create a legacy but also cash in on his status.

His post-fight interview with BoxNation was actually more entertaining than the bout itself.

Smith has made no secret of wanting to take on a recognised opponent. He spoke of his desire to go up against any of the notable boxers at 154 pounds—including Saul Alvarez and Miguel Cotto.

However, there was another intriguing proposition talked about at length during the televised chat.

Frank Warren—Smith’s promoter—certainly had a lot to say on the topic of a potential all-English showdown against Kell Brook: “We are going to make a big fight for him in the Autumn.” – Frank Warren talks Beefy and reveals Kell Brook offer Brook, of course, is currently campaigning down at welterweight.

The reigning IBF champion is almost certain to face WBO holder Jessie Vargas in a unification bout next, according to Isaac Robinson of SkySports.com.

However, Brook could opt to step up a division in the future. He was obviously paying attention to the televised comments from the Echo Arena, judging by his activity on Twitter:

Kell Brook ✔@SpecialKBrook
be careful what you wish for lad! #chocolatebrownie

Smith has other options: Jermell and Jermall Charlo hold the WBC and IBF titles, respectively. Erislandy Lara, meanwhile, has the WBA belt in his possession.

What is clear is that he doesn’t need to be wasting his time on many more opponents at the level of Radosevic.