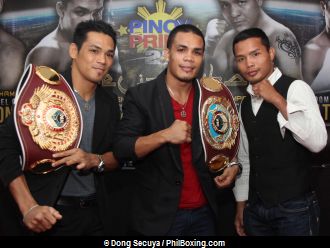 Fight fans can get a glimpse into the first major promotion outside the Philippines of the famed ALA Promotions as they team up with the giant broadcast network ABS-CBN and its widely watched global network TFC or The Filipino Channel when Viva Sports features the “Duel in Dubai” on its top-rated weekly boxing show “The Main Event” on PBO over Sky Cable at 8:30 p.m. on Saturday with a replay at 10:30 a.m. on Sunday.

ALA Promotions president Michael Aldeguer said the “Duel in Dubai” promises to be a deadly battle that is expected to thrill the large community of Filipinos in the United Arab Emirates.

The special will feature brief interviews with the ALA fighters, short training clips and highlights of some of their fights and those of their opponents.

Highlights of the Cabrera-Narvaez fight and the WBO super flyweight clash between Cabrera and unbeaten Daniel “Bad Boy” Rosas which ended in a split draw will highlight the special which will also include glimpses of Servania’s fights against former WBA super flyweight champion Alexander Munoz and his 2nd round TKO of Rafael “El Torito” Concepcion of Panama.

Bautista faces one of the toughest opponents in his comeback bid in the person of WBC Mundo Hispano champion Jose Juan “Piquet” Martinez who has an awesome record of 15 knockouts in 19 wins with only one defeat.

Short training footage of Maldonado who clashes with King Arthur Villanueva will also spice up the special.

The fights will be telecast by ABS-CBN on Saturday, September 6.