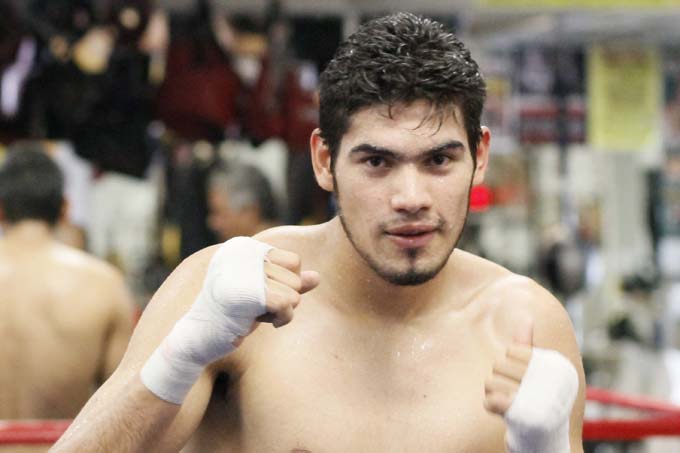 Undefeated WBO super middleweight champion Gilberto “El Zurdo” Ramirez (33-0, 24 KOs) of Mazatlan, Mexico is set to make the first defense of his title when he takes on Dominik Britsch (32-1-1, 11 KOs) of Germany on July 23 at the MGM Grand Garden Arena in Las Vegas live on HBO PPV. “I’m happy to be defending my title. I know nothing about my opponent, all I know is that I am training really hard for this fight,” Ramirez told Fightnews.com®.

After winning the title this past April, Ramirez went back to train in his hometown of Mazatlan, then resumed his camp in Southern California working with his longtime team of Jesus and Hector Zapari in preparation for the German challenger.

“I am training here in the area in Long Beach for this fight,” Ramirez said. “This preparation will be like every other. Training really hard to be ready for what my opponent has.”

Britsch, a relative unknown, has only fought twice in the U.S. Winning by TKO over Matt Berkshire in Detroit back in March of 2010 and by knockout over Delray Raines in 2011 in Carson, California. He’s coming off a unanimous decision over Slavisa Simeunovic this past February in Germany.

“It is a hard fight since I know nothing about my opponent. Sometimes those are the most dangerous opponents. You don’t know what to expect from them,” Ramirez said.

Ramirez defeated the hard-punching Arthur Abraham this past April to win the WBO super middleweight title co-headlining the Manny Pacquiao vs. Timothy Bradley card on what was billed as the “No Trump” Undercard.

“I was so happy to accomplish my life long dream. I beat a solid champion in Arthur Abraham,” Ramirez said. “When I returned home I was greeted by fans and media at the airport. I was very happy and excited, it was the first time I was welcomed at the airport.”

Hall of Fame promoter Bob Arum is no fan of Republican Presidential candidate Donald Trump, who has made disparaging remarks toward Mexicans and Mexican-Americans. Arum has promoted many Hispanic fighters over the years who have produced great fights. To show his support for the Latino community, Arum has featured Ramirez on two pay-per-view telecasts and is planning another card for the fall to further send his political message.

Ramirez gave us his thoughts on Trump’s comments and agenda. “We the Mexican people are always working hard and Donald Trump makes some comments that are insulting, but we have proven that we work hard in life to achieve our goals and make a living,” Ramirez said.

Should he get past Britsch as expected, Ramirez is taking aim at the other 168lb champions. “There are other champions in this division. Badou Jack, Felix Sturm, James De Gale, I would definitely want to unify a title with them. Hopefully they are willing to as well,” Ramirez said. A clash with WBA/IBF/WBC middleweight champion Gennady Golovkin is also a possibility.

Ramirez vs. Britsch will be a scheduled 12 round championship bout for Ramirez’s WBO super middleweight title. It will be the co-feature bout to the Terrance Crawford vs. Viktor Postol jr welterweight unification bout.

“We are going to give it and leave it all in the ring to defend this title,” Ramirez vowed.