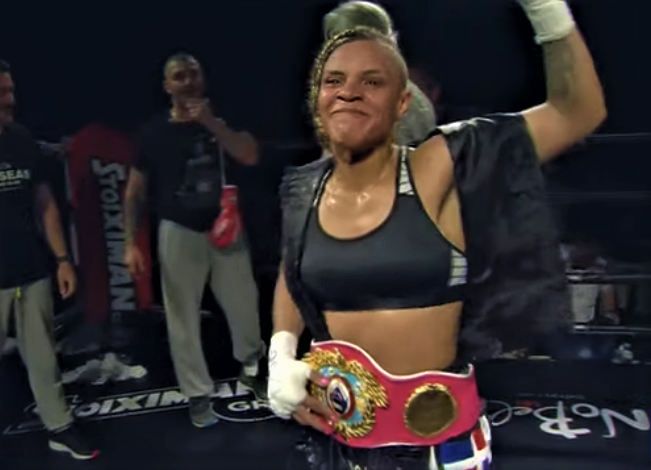 In the main event of a boxing card in Greece, Linardatou dominated Deanha Hobbs to retain the WBO junior welterweight title with a 10-round decision.

The fight started off with Linardatou picking her spots and throwing big hooks to the body while Hobbs threw lazy jabs and 1-2 combinations in the first few rounds. Linardatou briefly staggered Dobbs late in the second round, but failed to capitalize on the opportunity and drop Dobbs. For almost the entire fight, Dobbs fought off the backfoot, throwing simple combinations but unable to seriously hurt Linardatou.

As the fight progressed, Linardatou continued to throw harder punches as she kept walking Dobbs down. Dobbs did perform better in the second half compared to the first half of the fight, being more aggressive and willing to trade body blows with Linardatou in the center of the ring. Linardatou connected on a solid left hand in the seventh round, but Dobbs responded by pressuring the champion to the ropes and even landed a couple of hooks upstairs. Dobbs had perhaps her best round in the eighth when she landed a straight left that split Linardatou’s guard as well as a right uppercut that connected square on Linardatou’s face.

Linardatou started the ninth round with a flurry of body shots, immediately pushing Dobbs to retreat to the corner, and then connecting with a big left hook upstairs. Linardatou kept the frantic pace up, barely allowing Dobbs to throw anything big to get back in the fight. Linardatou nearly stopped Dobbs late in the round when she connected on another left hook that hurt Dobbs, but the challenger was able to survive the round. Dobbs had one more chance to turn the fight around when she landed a furious combination of punches in the final minute of the fight, but Linardatou was able to shrug off her opponent’s punches.

This was Linardatou’s first fight since winning the world title back in March with a TKO win over Kandi Wyatt. Linardatou dropped Wyatt three times en route to the sixth-round stoppage win in Greece.

WATCH Linardatou Vs. Hobbs in the next video: