Results:   The WBO Lt. Heavyweight Champion retained the WBO/WBA/IBF titles against Sergey Kovalev by TKO in the 8th. round.

Results:   The Champion Vasyl Lomachenko retains the WBO Featherweight Title against Romulo Koasicha by KO in the 10th round. 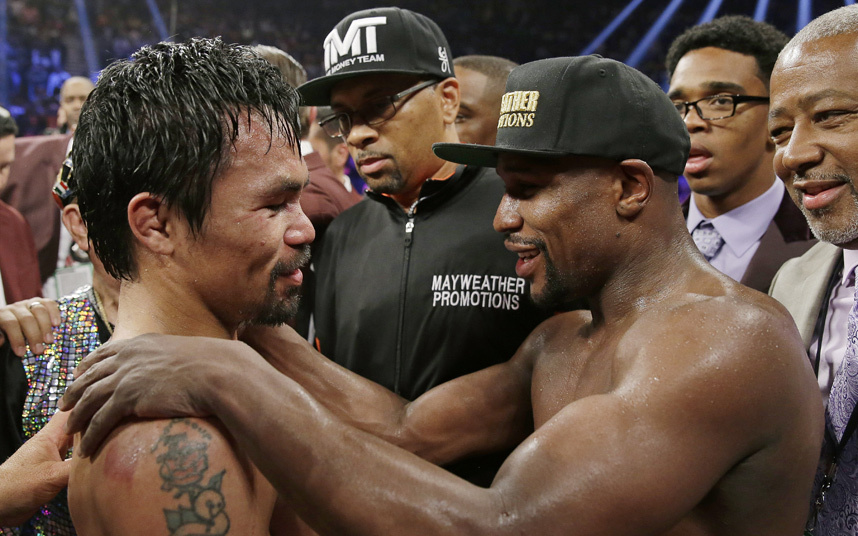 The fight of the century came and went, and in the end, nothing changed. Floyd Mayweather Jr. defeated Manny Pacquiao to stay unbeaten on Saturday night at the MGM Grand Garden Arena in Las Vegas, NV, seizing control of the latter stages of the fight to claim a unanimous decision on the judges’ scorecards.

Judges Burt Clements and Glenn Feldman scored the contest 116-112, while judge Dave Moretti scored it 118-110, all in favor of Mayweather. MMAFighting.com scored the bout 117-111 for Mayweather.

“He’s a hell of a fighter,” Mayweather said afterward of the rival he struggled to come to terms with for over half a decade. “I take my hat off to Manny Pacquiao. Now I see why he’s one of the guys who is at the pinnacle of the sport of boxing.”

In a fight that will likely go down as the most lucrative combat sports event ever, Mayweather battled through an unusually shaky start to seize momentum and gain control of the scorecards from round seven onwards. Pacquiao wanted to make it the contest a dogfight, and he did so early with some success, stalking Mayweather into the ropes and unloading his trademark punching flurries while cutting off the ring to great effect. The punching totals for both fighters were virtually identical by the start of the eighth round, but then Mayweather took over.

Led behind his jab, “Money” proved once again why he’s the greatest defensive fighter of our era, lulling Pacquiao’s offense into a standstill and outlanding the legendarily aggressive Filipino by a mark of 148 to 81 by the fight’s end.

Pacquiao (57-6-2), for his part, believed he won the fight, claiming that Mayweather “did nothing” and was largely running away throughout the contest. The judges disagreed though, and according to official fight statistics, Pacquiao landed double-digit punch totals just three times over the course of 12 rounds, with Mayweather’s movement and defense proving too stifling for Pacquiao to overcome.

Mayweather (48-0) now moves into the final fight of the massively lucrative contract he signed in 2013 with Showtime. And with Rocky Marciano’s hallowed mark of 49-0 within sight, the next time we see “Money” Mayweather may very well be the last. 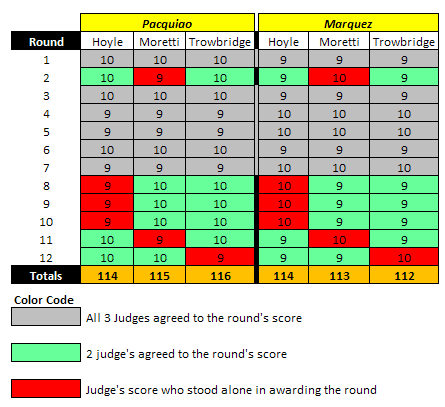 Scoring Summary by the Numbers

1. In six of the twelve rounds, all three judges agreed on the winner of the round.

2. In the first seven rounds, there was only one round where there wasn’t unanimous consent as to the winner.

3. There was disagreement among the judge’s scoring in all of the last five rounds of the fight.