Pacquiao: Expect a lot of action, a good fight 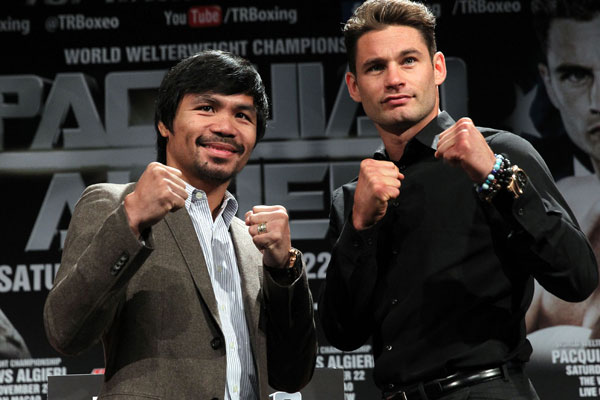 “I am glad and happy to fight again in Macao. It’s good for us to promote boxing in Asia and China,” eight division world champion and reigning WBO welterweight champion Manny “PacMan” Pacquiao (56-5-2, 38 KOs) told Fightnews.com on Wednesday. Pacman is set to take on WBO junior welterweight champion Chris Algieri (20-0, 8 KOs) on November 22 in the Cotai Arena at the Venitian Hotel in Macao, China live on HBO Pay per view.

We caught up with Pacquiao in Los Angeles at the Hyatt Regency Century Plaza Hotel. The international tour started in Macao, then made stops in Shanghai, San Francisco, Las Vegas, Los Angeles and will wrap today in New York. “The tour has been good. It’s been really fun. After this we’ll start to train,” Pacquiao said.

Pacquiao will begin his training camp with his longtime trainer Freddie Roach in Pacquiao’s hometown of General Santos City in the Philippines. This will be the second time in three fights that Pacquiao trains in the Philippines. “Training will be for about eight weeks we will know what to work on in preparation for this fight,” Pacquiao said. “It’s the same, it depends where you are fighting. In Macao it’s the same weather and time as the Philippines. If the fight was in the U.S then it’s good to train in LA at the Wild Card.”

In his previous fight, The Pacman avenged his controversial loss to Timothy Bradley Jr. “Before the second fight with Bradley I never thought of it as revenge. I just proved that I won the first fight,” Pacquiao said.

In Algieri’s his previous contest he dethroned Ruslan Provodnikov and win the WBO junior welterweight title. “The fight was very close he won the fight and he deserves it,” Pacquiao commented. “He got knocked down twice and came back. Let’s give him credit.”

Pacquiao’s trainer Freddie Roach also trains Provodnikov and was in the corner for the Algieri fight. “I think Ruslan did enough to keep the title. It was a close fight. That’s the way things go. It could have gone either way,” Roach told Fightnews.com

The Long Island native stands at 5’10 and uses his height and reach to his advantage. The size difference between him and Pacquiao was obvious. “It’s nothing new for me to fight a taller opponent. I am not alarmed about that,” Pacquiao said.

Roach added “He is left handed and leads with the power hand. He has a good jab. We’ll be prepared to take that jab from him. We will have the right sparring partners, a bunch of tall guys.” Pacquiao also talked to us about his desire of a rematch and fifth fight with his rival Juan Manuel Marquez. “You know I wanted the Marquez fight and they declined. We then went after the next best opponent,” Pacquiao said.

There have also been reports in recent days of a possible showdown with junior welterweight champion Danny Garcia later down the line. Pacquiao assured that the focus is currently set on Algieri. “Any fighter has a chance to fight with me but right now I have to focus on my upcoming fight with Algieri,” Pacquiao stated.

Pacquiao vs. Algieri will be a scheduled 12 round championship fight for Pacquiao’s WBO welterweight title. This will be Pacquiao’s 18th appearance on HBO PPV since bursting on to the scene with a sixth round TKO over Lehlohonolo Ledwaba back in 2001. As he went on to be a superstar scoring big wins over Marco Antonio Barrera, Erik Morales, Juan Manuel Marquez, Oscar De La Hoya, Ricky Hatton, Miguel Cotto, Antonio Margarito, and Timothy Bradley. Pacquiao looks to bring that intensity to the ring that helped him get those notable wins.

“I’m always motivated. I always have the fire in my heart. In my mind I have to continue to be intense,” Pacquiao said. “Expect a lot of action a good fight,” Pacquiao concluded.

Roach said “Don’t be surprised if Algieri runs late in the fight like he did against Ruslan.”