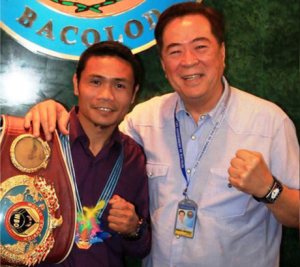 Nietes, who hailed from Bacolod and Murcia and also the longest reigning Filipino champion, in a report said that he is looking forward to avenge the loss of his friend, stablemate and fellow Negrense Merlito “Tiger” Sabillo – who lost to Rodriguez last year.

The erstwhile WBO mnimumweight champion Sabillo surrendered his belt to Rodriguez after downed in the 10th round in their title fight in Mexico.

Nietes has been in tough training in ALA gym in Cebu since April to prepare for his face-off with Rodriguez on Saturday, July 11, at the Waterfront Cebu City Hotel and Casino.

ALA gym’s lead trainer Edmund Villamor has stressed that Nietes has the edge over the Mexican when the bell rings.

But, Villamor reiterated that they won’t be that complacent against Rodriguez as he is a former champion who has an impressive record against Filipino fighters.

Murcia town Mayor Andrew Montelibano also foresees similar result on the Nietes-Rodriguez face-off. “With the kind of conditioning and training he is in, I believe Donnie [Nietes] will retain his title. I am in contact with him personally and I can see he is more ready than ever,” Montelibano said.