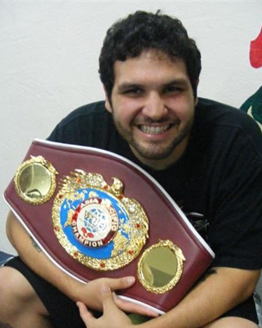 2011 was certainly a good year for WBO Asia Pacific and China Zone heavyweight champion Chauncy Welliver. The “Hillyard Hammer” continued to bang as the 28 year old Welliver stormed to a perfect 6-0 for the year and he pushed his win streak to 16 straight. As 2012 begins, Welliver’s record is an astounding 51-5-5, and he plans to continue moving up in the division’s ranks.

I spoke with Welliver today and he assured me that 2012 would be a year for his fans to savor.

“I have stepped it up slowly, but surely. I consider my career to really have started after the Solis fight. That is when I realized I could fight.”

Back in October of 2008, Welliver last tasted defeat at the hand of the unbeaten Odlanier Solis in Germany. A little over three years later, a focused Welliver has not looked back…until now.

“We’re pushing for a rematch with Solis” a confident Welliver told 8CN’s Darren Barcomb. “It’s not solid yet, but being negotiated.”

If Welliver wants to make a statement in the heavyweight division and take home some personal redemption, beating Solis would be a great way to do it. The 31 year old Cuban Solis (17-1) is considered a top tier heavyweight and is coming off of an unsuccessful WBC title shot against Vitali Klitshcko back in March. Solis injured his right knee in that matchup and saw his title dreams dashed in the opening round. He is now healed and has a lot of nay-sayers to prove wrong himself.

Since their initial bout in 2008, Welliver has stayed the busier of the two at 16-0, while “La Sombra” has gone 5-1. Activity is not the only thing leaning Welliver’s way though; a new training regimen has done wonders as well.

Working with Joe Hipp and trainer Ali Crosbie has gotten Welliver into the best shape of his career as he now weighs in a bit over 230, down about 50 lbs. from the Solis fight. “I went in nervous last time” Welliver admits….and that was 50 lbs. ago.”

“Joe is my first trainer ever and we’ve come up with how to beat Solis. Ali gets me in the best shape I can be in, so I know I can go 12 easy. Last time I went 2 and was done at the end of the 2nd. I’d come in prepared and not nervous this time.”

Ring jitters shouldn’t be a concern this time around though; Welliver seems at ease in the ring, has travelled the world to fight, and has picked up some serious title gold along the way.

On January 28th, he will defend his WBO Asia Pacific, WBC Asian Boxing, and New Zealand titles against Moyoyo Mensah (21-8-1, 9 KO’s) in a 12 rounder in Auckland, New Zealand.

After that, nothing is definite but Welliver added “Let them know we can bring the fight to China”, where he has amassed solid fan base and is a big draw. “In China, I’d not worry at all. I was on his turf last time and worried. Now he’s rolling in my neck of the world.”

It sounds like the ball is in Odlanier Solis’ court. 2012 is looking promising already……