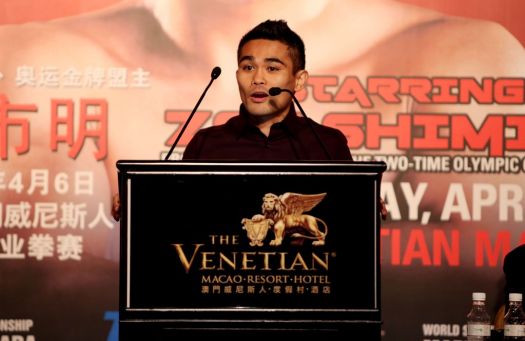 MACAU—His stamina no longer a concern, Brian Viloria will try to extend his dominance over Mexican fighters when he dangles his WBO and WBA flyweight titles against Juan Francisco Estrada at 10:25 tonight (same time in Manila) at Cotai Arena of The Venetian Resort and Casino here.

The 32-year-old Filipino-American has beaten 18 Mexicans, including his last four foes. He is again favored to chalk up his seventh straight victory and cement his status as the world’s best little boxer—the first unified flyweight champion in 47 years.

Having made weight as early as last week, Viloria (32-3 with 19 knockouts) checked in at a light 111.3 pounds during yesterday’s official weigh-in, even as Estrada tipped the scales at the 112 lb limit.

Although expected to go for the knockout if the opportunity arises, Viloria—who has stopped touted opponents Giovani Segura, Omar Nino Romero and Tyson Marquez in his last three bouts—said he is ready to go the full 12 rounds.

“My stamina is there,” said Viloria, whose last defeat came in 2010, when he ran out of steam against Colombian Carlos Tamara at Cuneta Astrodome in Pasay City.

Viloria regards Estrada (22-2, 17 KOs) as a pressure fighter similar to Marquez and Segura who both went toe-to-toe with him.

If Estrada comes in as advertised, Viloria said he will test the Mexican’s durability with body punches, before switching to the head.

According to the 22-year-old Estrada, who lost to Roman Rodriguez by unanimous decision last November, he is willing to wage war against Viloria and redeem his compatriots.

A strong starter, Estrada knocked out 13 of his victims inside the first three rounds.

“His timing is great,” said Somodio, who will man Viloria’s corner with Ruben Gomez. “His speed and power, of course, will always be there.”

Zou, the two-time Olympic (2008 and 2012) gold medalist and three-time World Amateur (2005, 2007 and 2011) champion who trained and sparred with Viloria at Wild Card, will tangle with Mexican flyweight Eleazar Valenzuela.

Roach, who was designated to fast-track Zou’s pro career, said he intends to make the Chinese a world champion in six fights.

Other Filipinos seeing action are unbeaten flyweight Milan Melindo of the ALA stable and Peñalosa brothers Dave and Dodie Boy Jr.

Melindo (28-0, 11 KOs), who will clash with Indonesian Tommy Seran (18-1, 9 KOs), was happy with the presence here of ALA Promotions president Michael Alde-guer and vice president Dennis Cañete.