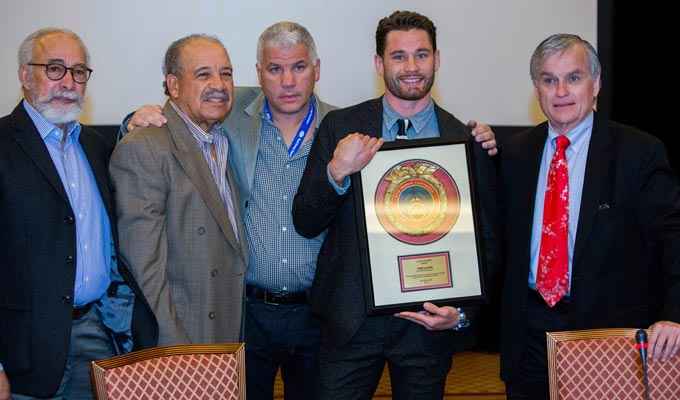 The third and final day of the 27th annual WBO Convention kicked off yesterday morning, and as anticipated, the open forum of the championship and ratings committees was not without fireworks. The day began with a short video presentation of the charitable work done by both the WBO and numerous WBO champions to promote the WBO “Kids Drug Free” program.

There then followed a brief discussion of the 2015 budget and a proposed amendment to the budget, which passed as well. Following this budget discussion, Joe Cortez briefly spoke of the role of instant replay in Nevada. “Instant replay in Nevada has been in play for two years,” Cortez said, “but it hasn’t been used.” Cortez noted that in Nevada only a referee has the discretion to overturn his or her decision, before adding that the “door was open” to any adjustments that needed to be made in regards to the rule as it stands in Nevada.

From there WBO junior welterweight champion Chris Algieri spoke of the importance of being a role model as a champion.

“Being a champion is a world wide title,” Algieri said, “there are a lot of eyes on you. A lot of young eyes. As a champion you want to present yourself to the world as a champion. As a role model.” Algieri was subsequently presented the WBO Gordy Volkman Man of the Year Award for Outstanding Community Service.

Following the presentation of the Gordy Volkman Award to Algieri, the discussion then turned to where to host the 2015 WBO Convention. Although the Philippines had been the early front runner, having been named in 2013 as the location of the 2015 convention, it was passed over for Florida. Citing concerns over the recent typhoon in the Philippines, and the impact that had on the feasibility of hosting the event there, President Valcarcel accepted a recommendation for the 2015 WBO Convention to be held in Orlando, Florida. Puerto Rico was named as a backup location. President Valcarcel, however, indicated a strong desire to eventually have the WBO convention in the Philippines in the near future.

A brief video fallowed in which highlights of the 2013 WBO Convention in Budapest was shown. Heavyweight Charles Martin was awarded the NABO fighter of the year award at that time as well as several other special recognition awards to journalist Pedro Fernandez, Ulf Steinforth, and Wladimir Klitschko. Wilfried Sauerland was given an award after having been named “European Promoter of the Year” as well.

From there the ever contentious championship and ratings committee kicked off with their session.

This started in the mini-flyweight division, where Japanese matchmaker Ulysses Sato pushed to have his fighter enter the WBO rankings.

There were no requests at junior flyweight and only one at flyweight (to move an undefeated European champion into the WBO ranks). However, the relative lack of controversy in the lowest weight classes was not a harbinger of what would follow, as the discussions became more intensive starting with the junior bantamweight division. Representatives for #5 ranked Paul Butler requested a move to #1 or, in the alternative, to have the winner of the Paul Butler-Jamie Conlan fight be named the mandatory challenger. Conlan is ranked #7 by the WBO. Although Frank Warren’s request to have the winner of the Butler-Conlan fight named “interim champion” was denied, the committee and President Valcarcel did agree to name the winner of that fight as mandatory challenger for champion Omar Narvaez.

At bantamweight several promoters made arguments to have their fighters move into the top ten, most notably #13 ranked Pungluang Sor Sinyu and #14 ranked Lee Haskins.

At junior featherweight the executive committee did acknowledge the difficulties that Guillermo Rigondeaux was having finding opponents willing to take him on. Hedi Taouab Mohammed initially pushed to have his fighter, #4 ranked Zsolt Bedak, move up in the rankings before President Valcarcel inquired about a possible matchup between Bedak and #2 ranked Genesis Servania.

At featherweight a compelling argument was put forth by representatives of King Sports to have undefeated Colombian banger Miguel Marriaga move into the top ten. A proposed fight between #8 ranked British bomber Mark McCollough and #5 ranked Polish fighter Kamil Laszczyk was also discussed, as well as the possibility of the winner of that fight moving up into the top four. Ulysses Sato made a push to have Filipino Mark Gil Melligen, the #13 ranked WBO Oriental champion, move into the top ten.

A familiar name was brought up in the junior lightweight discussions as Main Events pushed to have Edner Cherry return to the top ten on the basis of his nine fight winning streak. President Valcarcel seemed open to the proposal.

At lightweight it appeared highly likely that Juan Diaz might move up from #3 to #1 after the current #1 contender, Ray Beltran, fights the WBO champion Terence Crawford. The prospect of the #1 slot opening up brought out numerous other requests, including one from representatives of #4 ranked Anthony Crolla. However, that request was immediately challenged by Frank Warren, who reminded the executive committee that Crolla “never fought anyone in the WBO top 15” before offering his fighter, #9 ranked Terry Flanagan as a strong candidate to move up.

At junior welterweight the recognition that the title may be at play in the coming months also led to a contentious and colorful discussion. Ruslan Provodnikov’s camp made an argument to have him leapfrog #1 ranked Lucas Matthysse. Several fighters had representatives push to have them move into the top ten, including Emanuel Taylor and veteran Paul Spadafora.

In the welterweight division several promoters jockeyed to have their fighters move up, with the most notable being undefeated Canadian prospect Mikael Zewski, undefeated Fredrick Lawson, and the winner of the upcoming Jeff Horn-Robson Assis fight. Horn, the WBO Oriental Champion, is ranked #11 while Assis, the WBO Latino champion, is ranked #12.

In the junior middleweight division Frank Warren pushed to have #10 ranked Liam Smith move up while representatives of #13 ranked Sirimongkol Singwancha also pushed to have the Thai based fighter move into the top ten.

In the middleweight division the biggest news came when the WBO championship and rating committee voted unanimously to name the winner of a proposed four fighter elimination as the top middleweight. The first fight, between #4 ranked Andy Lee and #1 ranked Matt Korobov, would then face the winner of the Billy Saunders –Chris Eubank fight. Saunders is currently ranked #2 while Eubanks is ranked #9. Also noteworthy in the discussions regarding the middleweight division were proposals to move Abraham Han into the world rankings as well as a push to have Willie Monroe Jr. move up in the rankings.

In the light heavyweight division several fighters received pushes to move up the rankings including #11 ranked Isidro Ranoni Prieto, who already is emerging as arguably the most popular fighter ever from Paraguay.

In the cruiserweight division a second four fighter elimination looks likely as the winner of the upcoming Tony Bellew-Nathan Cleverly fight would fight either #1 ranked Krzysztof Glowacki or #3 ranked Nuri Seferi with the winner being named the mandatory for WBO Champion Marco Huck. Bellew is currently ranked #4 while Cleverly is currently ranked #5.

In the heavyweight division the discussion revolved around Wladimir Klitschko and who his next mandatory challenger would be, as well as when he would be required to fight that fighter. After some discussion, it became apparent that the winner of the upcoming Tyson Fury-Dereck Chisora fight would be named mandatory challenger to the WBO champion, although the timetable of that mandatory defense was still not set in stone.

Rounding off the event was the gala banquet in which the family of the recently deceased Dan Goossen was presented with an honorary WBO belt. Several other awards were handed out, including WBO Promoter of the year (Bob Arum), WBO Fight of the year (Crawford-Gamboa), WHO female fighter of the year (Carolina Duer), WBO fighter of the year (Sergey Kovalev), Spanish Network of the year (Telemundo), and an award to Vasyl Lomachenko, who was given an award for being the WBO champion with the brightest future. Rounding off the gala banquet was a touching and moving ceremony where both Joe Calzaghe and Oscar De La Hoya were awarded lifetime champion awards by the WBO. Both Calzage and De La Hoya gave moving speeches about their ties to the WBO, and how important the WBO belt had meant to them as fighters.