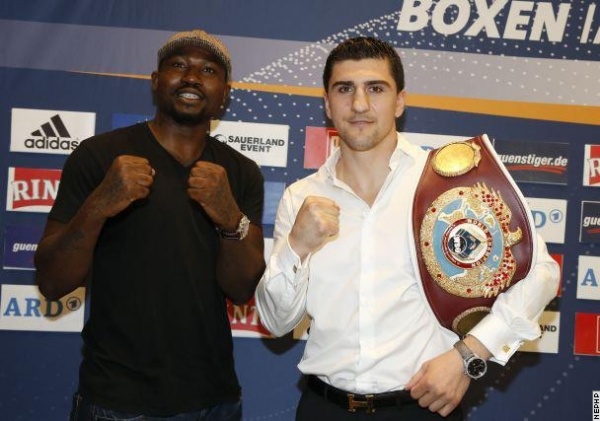 There is definitely no love lost. Britain´s Ola Afolabi (19-2-4, 9 KOs) did say he would hug and shake hands with his opponent Marco Huck (35-2-1, 25 KOs) after their WBO Title Fight on June 8 at the Max-Schmeling-Halle in Berlin, Germany – but the attending members of the press were not really convinced after the pair´s previous war of words during Monday’s press conference. Photos by Photo Wende.

Before Afolabi started his attempt to calm things down, current WBO Cruiserweight Champion Marco “Captain” Huck and the Interims Titlist were involved in a heated exchange of words. The first one to trade verbal blows was the 28-year-old German. “Afolabi is starting to get on my nerves. I beat him in December 2009. After I fought Alexander Povetkin for the WBA Heavyweight Crown, it was difficult for me to find the right motivation for my rematch with Afolabi in May last year. However, I believe that I actually won that bout, even though it was scored as a majority draw. That won’t happen again. I will win in my own backyard. We won’t be playing cat and mouse anymore. This will be a war – I won’t be holding back.”

That was the cue for Afolabi to start his own rant. “Huck shouldn’t be able to call himself world champion anymore. In my opinion, he lost on three previous occasions. He lost against Lebedev, he lost against me and also against Arslan. He should only be able to call himself German Champion or Champion of Berlin,” said the 33-year-old. The Brit stated that he is planning to humiliate Huck in front of his own fans. “I would be ready to take him on this weekend.” Then Afolabi directed his next words directly towards Huck. “Everybody knows that I have always been a good technician, but now my fitness level is also excellent. I will seriously hurt you come June 8. You will need a wheelchair after the fight,” said the Los Angeles based cruiserweight. Tickets for the big fight night at the Max-Schmeling-Halle in Berlin Germany on June 8 are available at www.eventim.de.