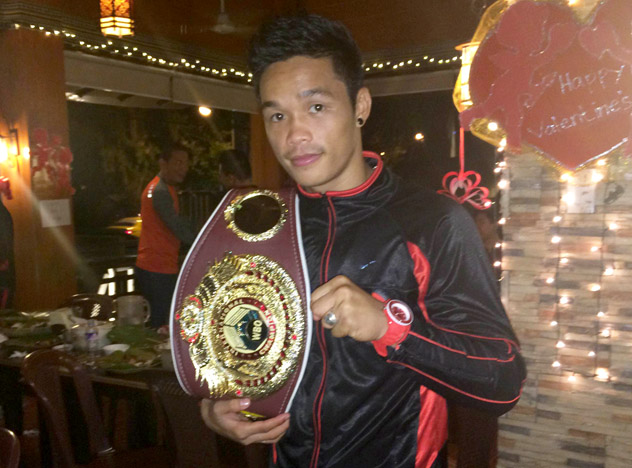 Pagara (35-2, 22 knockouts) dropped Chavez (24-8, 12 KOs) twice in the first round and once more in the second before referee Bruce McTavish stopped it at the 1:56 mark, sending Chavez to his eighth loss, all by knockout.

Pagara dropped Chavez early in the fight with a left hook to the body. With a knee on the canvas, Chavez took another hard right hand that gave him a good reason to stay down.

Chavez rose up, living up to his nickname “El Dolar,” which he says was given to him because he goes up and down like the foreign exchange rate. He was dropped again later in the round on a flurry of punches, perhaps feeling overwhelmed. The final knockdown in the next stanza came off of a lunging left hook from Pagara.

With the Sinaloa, Mexico, native down on the canvas and holding his right eye, the referee saw no reason to continue the bout.

“I’m ready for the next level,” said the Cagayan de Oro, Philippines, native Pagara, who has now won eight straight since his upset loss to Rosbel Montoya in 2011.

With virtually no domestic fighters in his weight class, Pagara’s opposition has been questionable at times. He says he wants to test himself against more formidable opposition, namely RING junior welterweight champion Danny Garcia and former 140-pound unified champion Amir Khan.

Pagara’s promoter, Michael Aldegeur of ALA Boxing, says the plan is to relocate Pagara to the United States this year to train in the Los Angeles area, where he can find the necessary sparring to improve.

Aldegeur says Pagara will fight on the company’s first U.S. card in San Diego on May 23 before having a step-up fight at the StubHub Center in Carson, Calif., in September.

“Jason has always been someone who has been in question,” said Aldegeur. “People ask if he’s the real deal. When he comes up and fights some of the big names, that’s when we’ll be able to get some real answers.”

Pagara’s trainer, Edito Villamor, doesn’t put much stock into Chavez’s past shortcomings, however. He feels Pagara had a job to do it and accomplished it early.

“We don’t base off of the record. Mexicans are Mexican fighters. He got hit,” said Villamor.

If Pagara’s opponent brought out the best in him, Juan Luis Hernandez brought out the worst in Genesis Servania. For twelve rounds, Servania chased after the Tijuana, Mexico, resident in a fight that drew boos from the crowd on several occasions.

The 23-year-old Servania, who is currently rated the No. 1 contender to WBO junior featherweight champion Guillermo Rigondeaux (who also holds the RING and WBA belts), was unable to keep his three-fight knockout streak alive as Hernandez came to survive.

Servania (26-0, 11 KOs) started the bout strongly, landing effective left hooks to the body. His jab was absent for long stretches of the bout, however, and at times Servania left himself open for Hernandez’s counterpunches.

The fight seemed on the verge of becoming an all-out brawl in Round 10 when a left hook and a right hand turned Hernandez (17-4-1, 9 KOs) along the ropes. As Servania went to capitalize, Hernandez took chances to counter. Both fighters traded blows until the final bell.

“The opponent is not fighting. He kept running, he was on survival mode,” said Villamor of Servania,rated No. 4 by THE RING at 122 pounds, afterward. “Genesis’ performance was good; his opponent was the problem.”

Arthur Villanueva rejuvenated his image as a future contender with a one-sided drubbing of faded former WBO flyweight champion Julio Cesar Miranda in a ten-round junior bantamweight fight. Two judges saw it for Villanueva by the score 98-93 while the third scored it 99-91.

Villanueva (27-0, 14 KOs), who is rated No. 6 by THE RING at 115 pounds, controlled the bout early, digging hooks and straight rights to Miranda’s midsection that slowed the 34-year-old down later on.

Despite being clearly shopworn, Miranda (38-12-2, 29 KOs) remained tough and tricky throughout, switching stances and throwing punches from awkward angles that found their way around Villanueva’s guard.

There were no knockdowns in the bout and Miranda eventually adapted to Villanueva’s power to coast to his inevitable defeat.

The win provides a much-needed boost for Villanueva after flat performances in his last two bouts against Fernando Aguilar and Henry Maldonado.

“I never mind that before,” said Villanueva, when asked if his confidence was affecting by those outings. “I only focused for my fight with Miranda.”

Miranda, who won a flyweight title in 2010 and made three defenses before losing it in a close bout with Brian Viloria, has now lost six of his last nine bouts, with one draw.

Earlier in the night, 19-year-old Mark Magsayo (10-0, 8 KOs) of Tagbilaran City scored a fifth-round technical knockout of Thai Sukkasem Kietyongyuth (13-4, 8 KOs) at the 2:19 mark in a ten-round featherweight bout.

Magsayo set the first knockdown up with a left hook to the body-left uppercut to the chin sequence which blinded Kietyongyuth to the right hand that followed up. The Thai rose up quickly but was met by a two-fisted barrage from Magsayo, who pounded the body to set up bigger punches up top.

As Kietyongyuth retreated to the ropes, Magsayo uncorked an overhand right that sent the Thai head-first out of the ring. The referee immediately stopped the fight without a count.