Nietes, Fuentes go to War, Ends with a majority draw 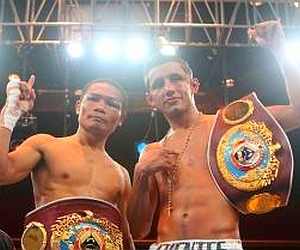 There was not an empty seat in sight at the Cebu Waterfront for Pinoy Pride 18 as Donnie Nietes retained his WBO Light Flyweight World Title but only courtesy of a majority draw with Mexican challenger Moises Fuentes.

The 12 rounds were simply not enough to separate these two champions (Fuentes holds the WBO Minimumweight World Title) and the night finished with both posing in the ring with their respective belts after one judge scored the fight 115-113 for Nietes and the other two had it dead even at 114-114.

The Filpino landed the most meaningful shots while utilizing his excellent head movement to keep making Fuentes miss. Despite this good work Nietes ultimately paid the price for being too economical with his punch output as he allowed the Mexican to be the aggressor for the majority of the fight.

Fuentes was on the front foot in the early rounds, banging away to the body and head but finding it difficult to connect cleanly with Nietes who countered sparingly but effectively, sneaking in some eye catching right hooks. In round five the gameplan of the Bacolod born boxer seemed to be working to perfection as he ducked and dived for the first two minutes before unleashing a series of solid overhand rights which wobbled  Fuentes.

The Mexican would have been relieved to hear the bell as Nietes was moving in for the kill and looked capable of finishing the fight but the momentum of the fight turned in the sixth as Fuentes, whose nose appeared to be broken, rallied and Nietes was cut twice, once by an unintentional headbutt and once by a clean punch according to referee Jack Reiss.

Fuentes’s nose seemed to be troubling him but he bravely continued moving forward and with blood streaming from cuts above both of his eyes Nietes went into defensive mode, easily staying out of trouble but allowing himself to be outworked by his more active opponent.

Nietes’s ability to duck and dive and leave Fuentes swinging at fresh air was admirable but he probably threw rounds six, seven and eight away by dispensing almost entirely with his offence. In round nine he finally got through with a trademark right upper cut and finished the round strongly with a couple more clubbing overhand rights.

The Filipino fighter’s corner tried to encourage him to pick up the pace going into the final three rounds letting him know in no uncertain terms that he had nine minutes to rescue the fight and instead of constantly backing up Nietes began stand his ground and look to land punches.

By the time the final round arrived Fuentes was clearly starting to slow as Nietes repeatedly circled out of trouble and left the Mexican lunging at fresh air.  The pattern of the fight continued until the final bell with Nietes displaying his defensive superiority but proving more adept at ducking and diving than actually landing decisive punches.

The two American judges, Adalaide Byrd and Pat Russel, both scored the fight a draw while Filipino Danrex Tapdasan had Nietes winn Russeling by a single round. Fuentes’s entourage, which included Mexican legend Marco Antonio Barrera, were incensed by the decision but the general consensus among neutral observers at ringside was that justice had been served.

While there will inevitably be controversy when a fight is settled by such thin margins WBO Supervisor Leon Panicello proclaimed himself satisfied with the outcome,

Speaking after the fight Nietes admitted that he had intentionally taken his foot of the gas and chosen to conserve energy midway through the fight because he believed he had won the first four rounds and confirmed that he would be open to the possibility of a rematch with Fuentes.

Earlier in the evening two of Nietes’s ALA Boxing Gym team mates registered stoppage wins over experienced opponents.  Genesis Servania used his superior speed and reach to good effect against Angky Angkotta. The Indonesian was not afraid to stand and trade with the unbeaten 21 year old but he was clearly outmatched and the referee decided to step in and save him from further punishment with seconds remaining in the seventh.

With this win Servania successfully defended his WBO Asia Pacific Super Bantamweight Belt for the first time and extended his perfect professional record to 19-0. Jimrex Jaca was also up against a spirited challenger in the shape of Rachamongkol Sor Pleonchit but, despite having his moments in the fight the Thai was outmatched and was dropped once in the second and finally wilted in the face of a barrage in round seven.