Unified WBO Lightweight Championship: ‘Corrales-Castillo I’ was a brawl of a lifetime 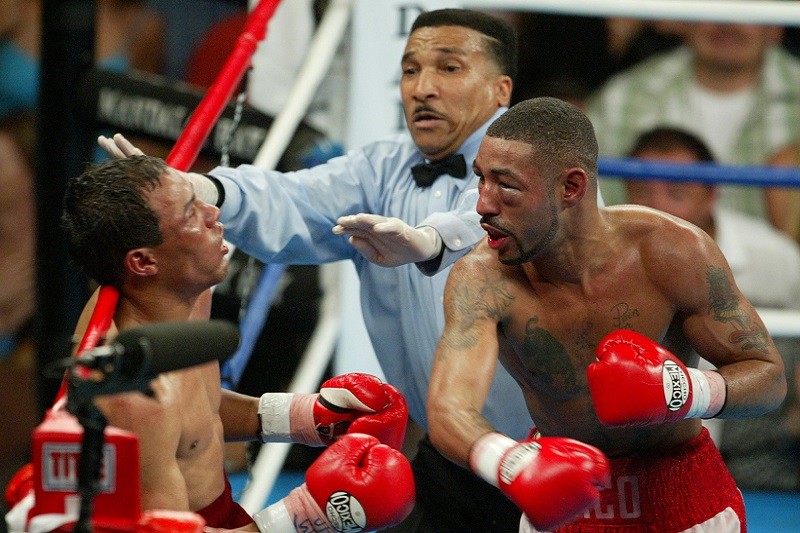 On May 7, 2005, one of my favorites fights of all time took place when Diego Corrales took on José Luis Castillo at the Mandalay Bay in Las Vegas, Nevada.

What happened once the bell rang not only later would become easily the Fight of the Year for 2005, it would become heralded as one of the greatest fights of all time.

Both men were willing to trade blows inside for the entire fight and was amazing action throughout. Corrales said before the fight, “This fight will be like two buffaloes colliding,” and let me tell you that this not only was that but then some as it played out like the real-life version of rock ’em, sock ’em robots.

The fight was an intense, bloody and ruthless match throughout the contest but will be enshrined in history for its te epic tenth round.

Weeks would take away a point from Corrales for excessive spitting out of his mouthpiece.

When the fight resumed, Corrales would land what Castillo later called “a perfect right hand.” After that right, Corrales had Castillo against the ropes and landed numerous punches which visibly had Castillo out on his feet, causing Weeks to stop the fight.

The tenth and final round without question is not only remembered by those watching this slugfest but the amazing call of its conclusion by Steve Albert calling the blow by blow for Showtime alongside Al Bernstein.

“Unbelievable! Ebb and flow! They’re all standing here at Mandalay Bay! Corrales coming back after being on the canvas twice here in the 10th! Now, Castillo steps back! Corrales waning! Castillo’s in trouble! Weeks steps in and the fight is over! Corrales with a remarkable dramatic turnaround to win this fight! Unbelievable! Diego Corrales said he would go through hell before losing this fight. He may have.” — Steve Albert calling the end of the fight on Showtime.

A rematch of this fight took place on October 8, 2005, but was nowhere as close to capturing the magic of the first one and was shrouded in controversy as Corrales failed to make weight and made the match a non-title one. Corrales also was stopped in the fourth round by Castillo. A third one was set to happen but never took place.

On May 7, 2007, exactly two years after the first fight, Corrales died in a motorcycle accident. Castillo would continue to box before retiring in 2014.

Bernstein said on the broadcast it was “the single most extraordinary comebacks to win a round that has ever happened.”

It still is one of the greatest ones, I’ve ever witnessed.

If you have never seen this bout at all or haven’t seen it in a long time, enjoy this epic clash here. Trust me, this doesn’t disappoint.