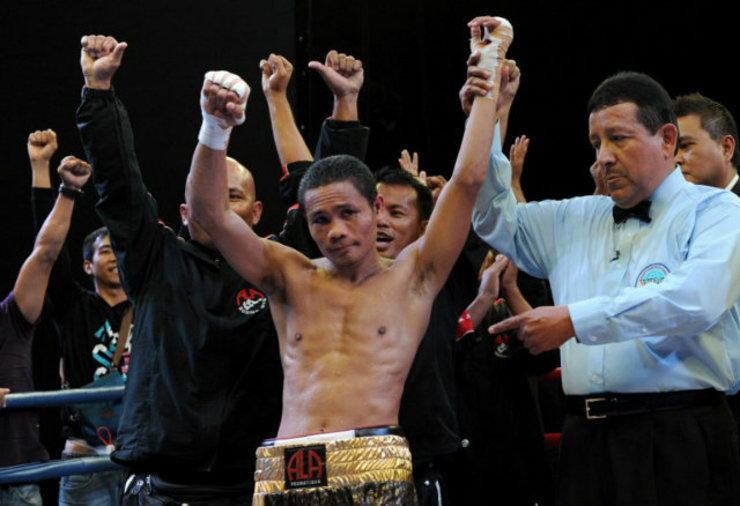 Donnie Nietes may not have the fighting style or gift of gab that make a boxing star, but the understated champion is gaining respect and making history CEBU CITY, Philippines – In a corner of a conference room at the Waterfront Hotel in Cebu City, amid the cacophany of post-press con pleasantries, sits Donnie Nietes. Dressed neatly in a black, two-piece suit, Nietes is in his own world, his mind seemingly a million miles away from the chatter surrounding him.

Unless you were well-versed in the sport of boxing, you’d never suspect that this man was one of the world’s most revered fighters in the the lowest divisions. He’s a reserved person who doesn’t say much, whether it’s in his native Illongo tongue or his limited English. He doesn’t affect the superstar aura of Manny Pacquiao, whose infinite facial expressions keep photographers clicking away with their cameras.

He also won’t end up occupying a spot on the Mount Rushmore of Filipino boxers (those spots are reserved for Pacquiao, Nonito Donaire, Flash Elorde and Pancho Villa), but he could make a case as one of the top ten boxers to come from the Philippines when his career is done.

But for the past seven years, Nietes has quietly reigned over the strawweight (105 pounds) and junior flyweight (108 pounds) divisions, winning world titles with a style that is as subtle and efficient as his personality.

“His personality is not there. He’s not a very charismatic guy,” his promoter Michael Aldegeur of ALA Boxing bluntly stated at Thursday’s press conference. “He’s a quiet guy, he doesn’t talk much. I know that in time the respect will be there. [It hurt that] he came in the era of Nonito Donaire, Manny Pacquiao.”

The 24-year-old “Chapito” Velarde of Culiacan, Mexico has won three straight since losing a thrilling title challenge to Ryo Miyazaki in five rounds in May of 2013. Nietes will be making his fifth – and possibly final – title defense at 108 pounds.

If Nietes can’t get the attention of the public with his verbal skills or fighting style, he’ll have to do it with historical achievements. Nietes has tentatively planned to move up to 112 pounds – where greater challenges and greater respect reside.

Nietes is one of just eight Filipino boxers to have won world titles in multiple divisions, and he’s hoping to put himself in more exclusive company in a third division.

In particular, Nietes says he wants bouts with IBF/WBO flyweight champion Juan Francisco Estrada of Mexico and RING/WBC flyweight champion Roman Gonzalez of Nicaragua, who have both achieved higher visibility in recent years due to their explosive styles.

All of that is contingent upon the outcome of Saturday’s fight, which headlines ALA Boxing’s “Pinoy Pride 28” card.

“We don’t know what Donnie will be like at 112,” said Aldegeur. “He’s been comfortable at 108, it wasn’t an issue for us to say he couldn’t make weight. We just felt there were bigger names out there, Donnie wanted to fight the big names out there.”

(RELATED: Junior flyweight champ Nietes to move up in weight after Velarde defense)

Another option would be for Nietes to stay at 108, where the WBO titleholder from strawweight, Francisco Rodriguez Jr., who will face Filipino journeyman Jomar Fajardo in a non-title ten-round flyweight bout on the undercard.

The 21-year-old Rodriguez of Monterrey, Mexico rose to prominence earlier this year in March, when he stopped previously unbeaten titleholder Merlito Sabillo to win the WBO strawweight title. In another Seven Degrees of Separation twist, Sabillo is also on Saturday’s card, facing Indonesian trial horse Faris Nenggo in his first bout since the loss.

In his next fight, Rodriguez bolstered his credentials when he outslugged Japan’s Katsunari Takayama to annex the IBF 108 pound title as well in what many consider to be Fight of the Year. He was originally scheduled to face Filipino Virgilio Silvano before Fajardo was substituted this week.

Rodriguez could be installed as the mandatory challenger by the WBO should he elect to campaign full time at 108 pounds, which he says is his intention.

Rodriguez made no secret of his desire to face Nietes, standing up on the dais to issue a challenge before declaring that his hotel room was substandard and dancing to “Crazy Little Thing Called Love,” among other things.

“I was the best in strawweight and I believe Donnie Nietes is the best in mini flyweight. I want to fight the best. I believe I can beat him,” stated Rodriguez.

Whether Nietes stays at 108 or 112, performances like his most recent bout, when he knocked out Moises Fuentes in nine rounds in a rematch of their 2013 draw, will help build his popularity in the second half of his career. Nietes has won his last two bouts by knockout – a streak he hadn’t enjoyed since before he won his first world title.

Perhaps he’s realized that he won’t need to do much talking if his fists speak with enough volume.

“I think I’ll get a knockout in this fight,” Nietes said.