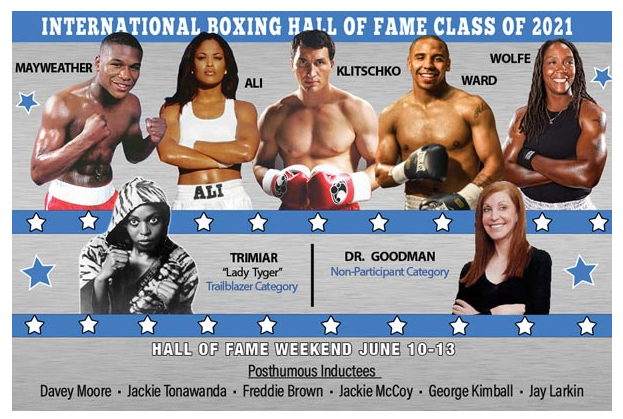 The International Boxing Hall of Fame and Museum announced today the members of the Class of 2021. Living inductees include champions Wladimir Klitschko, Floyd Mayweather and Andre Ward in the men’s Modern category; Laila Ali and Ann Wolfe in the women’s Modern category; Marian Trimiar in the women’s Trailblazer category and Dr. Margaret Goodman in the Non-Participant category.

Posthumous inductees are: featherweight champion “The Springfield Rifle” Davey Moore in the Old Timer category; Jackie Tonawanda in the women’s Trailblazer category; cut man Freddie Brown and manager / trainer Jackie McCoy in the Non-Participant category; journalist George Kimball and television executive Jay Larkin in the Observer category. Inductees were voted in by members of the Boxing Writers Association and a panel of international boxing historians. Biographies on the Class of 2021 can be found on www.ibhof.com

“We’re extremely excited about the Class of 2021 and are very much looking forward to honoring the newest class of inductees to earn boxing’s highest honor,” said Executive Director Edward Brophy.

The 2021 Hall of Fame Induction Weekend is scheduled for June 10-13 in Canastota, NY. Many events in “Boxing’s Hometown” of Canastota throughout the four-day celebration, including a 5K Race / Fun Run, golf tournament, boxing autograph card show, VIP Cocktail Reception, Parade of Champions and the Official Induction Ceremony on the Hall of Fame Museum Grounds, are scheduled. The Hall of Fame Weekend evening events include Friday night’s Fight Night at Turning Stone and Saturday’s Banquet of Champions. Both events will take place at Turning Stone Resort Casino in nearby Verona, NY.

COMMENTS UPON RECEIVING INDUCTION NEWS
“Thank you for the great news. It is an honor to be a Hall of Famer. I’m so impressed with the dedication and passion the Village of Canastota has for boxing. All of the champions feel so honored and blessed to be in the Hall of Fame. It’s amazing.”

“It is a great honor for me to be inducted into the International Boxing Hall of Fame as a first-ballot nominee and a member of the 2021 class. Throughout my career, I gave everything I could to the sport of boxing, and now, to be recognized by one of the most prestigious honors in the sport for that hard work and dedication is very humbling. I am looking forward to attending the Hall of Fame Induction Weekend in June and being honored alongside the other members of the class of 2021 too.”

“I’ve been waiting for this call for most of my life. It finally came. I’m a first ballot Hall of Famer. God has been good to me. I can finally rest now. This chapter of my life is complete.”

“It truly is an honor to be inducted into the International Boxing Hall of Fame, CANASTOTA, Class of 2021. Being that my father was also inducted many years ago, makes this honor extra special to me. I learned so much inside the ring that I have applied to every area of my life outside of the ring. Boxing will forever be my first love…and knowing that I will be on the Hall of Fame Wall, inspiring others who come behind me for years to come, is a blessing that I will never take for granted.”

“I got goosebumps. I don’t think a lot of people understand what I did. I came off the streets, trained with the best and boxing saved my life. This makes all the work I did worth it. This means completion. I completed what I set out to do in life and in boxing. In boxing a lot of people have to live life first. I lived boxing first and boxing helped me through life. I would not be where I am in life if it wasn’t for boxing and this just puts the icing on the cake.”

“Wow! This is really an honor. I appreciate the recognition very much. This is exciting news.”

“This means everything. I can’t tell you how much I love boxing. I’ve always loved boxing and I love the fighters and it’s all about the fighters. The fact that I’m recognized in this way means so much because it means alot for the healthcare of the fighters, the safety of the sport and promoting improvements to the sport to make it better for everyone involved. It’s the best honor I could even imagine.” 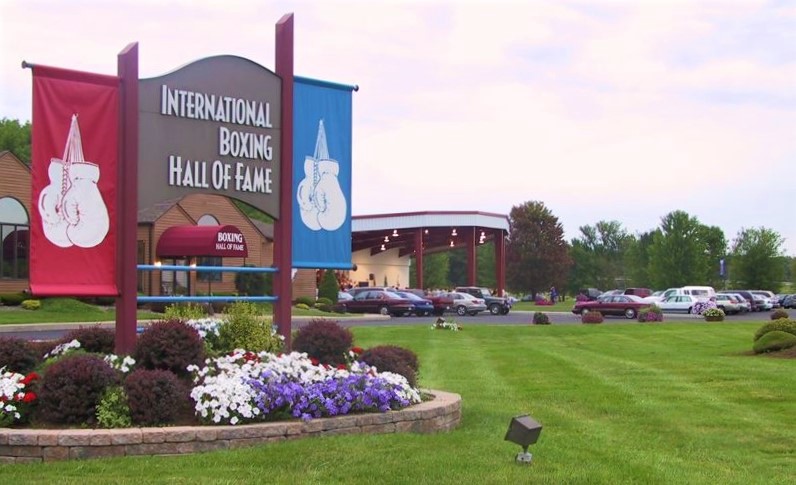 Help The IBHOF Raise Needed Funds. We Appreciate Your Support !
——-
ATTN: BOXING FANS!! The Boxing Hall of Fame is holding a fund-raiser auction. This is your chance to support the Hall and win a great boxing souvenir.

The International Boxing Hall of Fame will reopen to the public on Monday, June 29th and officially ring the bell at 11 a.m. to open the doors and begin the next round of honoring the best in the sport of boxing.

To mark the reopening, visitors will be charged the Hall of Fame’s youth rate of $8.50 all summer instead of typical admission rates of $13.50 for adults and $11.50 for seniors. Ages 6 and under are free.

The Hall will step back into the ring with new protocol in accordance with recommendations of the State of New York and public health officials. The following will be in place: Masks are required for staff and fans, safe social distancing, 25% capacity, frequent cleaning and sanitizing, hand sanitizer will be available and plexiglass shields at admission check-in.

“The Hall of Fame is excited to officially ring the bell at the Museum entrance to open the doors to fans for a walk down boxing’s memory lane,” said Hall of Fame Executive Director Edward Brophy. “It’s entertaining and educational and can be enjoyed by the entire family at an affordable cost. The Hall wants to deliver a knockout punch never thrown before with everyone receiving the youth rate all summer long.”

Among the exhibits fans can see include the world famous Madison Square Garden boxing ring that Muhammad Ali and “Smokin’” Joe Frazier fought “The Fight of the Century” in that is on permanent display.

“Fans visiting the Hall of Fame have a truly unique opportunity to watch the classic 1971 battle between Ali and Frazier ringside to the actual ring they so bravely fought in,” said Brophy.

The Hall of Fame chronicles the history of the sport with unique and educational exhibits including fist castings, boxing robes, boxing shoes, statues and audio/visual stations highlighting classic boxing matches. The Hall of Fame Wall features photographs and biographies of all inductees.

A not-for-profit organization, the International Boxing Hall of Fame opened to the public in 1989 in Canastota, New York and is located at Exit 34 of the New York State Thruway. Hours of operation are Monday-Friday 9 a.m. to 5 p.m. and Saturday-Sunday 10 a.m. to 4 p.m. 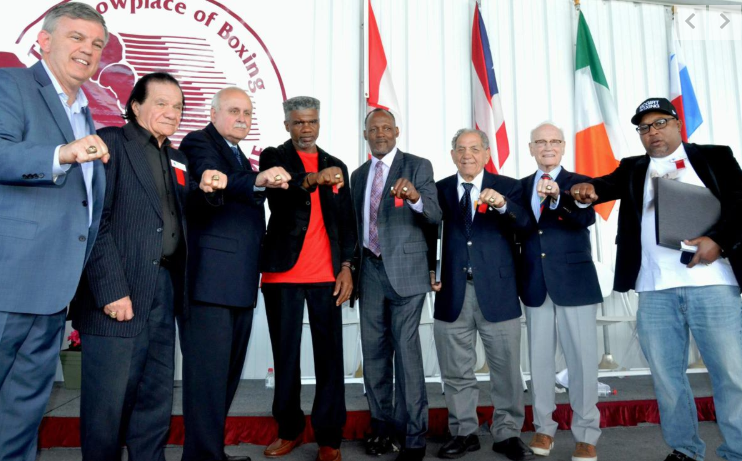 Inductees were selected in December by members of the Boxing Writers Association and a panel of international boxing historians.

Tough guy in the ring, James “Buddy” McGirt was not so tough on his special day.

McGirt struggled repeatedly with his emotions on a sun-splashed afternoon, at times barely managing to keep it together as he was inducted into the International Boxing Hall of Fame on Sunday.

“I warned you last night that I was going to cry,” McGirt, a two-division champion, said as he looked out at the fans, his wife Gina, and the rest of his family. “Today, my wife, my three daughters and my son, they said something to me that really got to me. They said, ‘We’re proud of you.’

“It makes me feel that all the hard work that I did for years, they appreciate it,” McGirt said. “All the sacrifices, not being home, missing birthdays, holidays, graduations. It’s a lot of work. I want my kids to know, I’m sorry. I love you.”

After giving up football for the sweet science as a kid, McGirt turned pro in 1982 as an 18-year-old high school senior and three years later won the WBC Continentals Americas light welterweight title from Sugar Boy Nando with a fifth-round knockout. He captured the vacant IBF light welterweight title in 1988 with a 12th-round knockout over Frankie Warren and retired in 1997 with a record of 73-6-1 with 48 KOs. He has since trained five champions.

Jackson, a native of the U.S. Virgin Islands, was renowned for his powerful punching power. Dubbed “The Hawk,” he turned professional in 1981 and scored 29 consecutive victories, 27 by knockout. He retired in 1998 with a pro record of 55-6, including 49 KOs.

“Amazing. Wow. I’m honored to be here coming from such a humble life,” Jackson said. “St. Thomas is only 32 square miles, and if you look on the map all you’re going to see is a dot. But, you know what? The Virgin Islands pack a big punch. We may be a small island, but, man, we have a big heart.”

Curry, of Fort Worth, Texas was dubbed the “Lone Star Cobra” for his lightning-quick reflexes and hand speed. He captured the vacant WBA welterweight in a 15-round decision over Jun-Suk Hwang in Fort Worth in 1983. The next year, he became the inaugural IBF champion and unified the 147-pound titles with a second-round knockout over WBC champ Milton McCrory. His induction came 22 years after he retired with a pro record of 34-6 with 25 KOs.

DeMarco was born in Boston and turned pro in 1948, borrowing his ring name from a friend because he wasn’t the legal fighting age of 18. He upset Johnny Saxton with a 14th-round knockout at Boston Garden to become welterweight champion, then lost the title to Hall of Famer Carmen Basilio in a 12th-round knockout. Basilio also stopped him again in the 12th round of their rematch. DeMarco retired in 1962 with a pro record of 58-12-1 with 33 KOs.

“I implore those who visit the city of champions to remember the one single champion that has represented our city like no other champion because he’s a true Bostonian,” promoter Al Valenti said as he introduced DeMarco. “And today I get to call him a Hall of Famer.”

Atlas was born in 1956 on Staten Island, New York, and trained in upstate New York under Cus D’Amato, winning the 1976 Adirondack Golden Gloves lightweight title. But back problems forced him out of the ring and he apprenticed under D’Amato as an assistant trainer working with a young Mike Tyson. He trained nine champions before becoming one of boxing’s most popular and outspoken broadcasters the past two decades.

“It kind of is a boxing heaven,” Atlas said. “I’ve been given this honor today for my work as a broadcaster. I tried in some small ways to make the audience aware of something that perhaps they had not been aware of that would both add to their viewing of the bout and the appreciation they had for what the fighters were doing in the ring.”

The Canadian-born Jutras was a Golden Gloves champion and the 1951 Royal Canadian Navy welterweight champion before becoming a judge, referee, and matchmaker. He worked over 75 world championship bouts.

Samuels, a native of Pennsville, New Jersey, began his career writing for local papers before being hired by the Philadelphia Bulletin in the mid-1970s. After the paper folded, Samuels was hired by Bob Arum to handle East Coast publicity for his ESPN boxing series and has been the publicist for Top Rank since 1996.

Martino, who died last year at 93, wrote for The Ring, was boxing columnist for The San Juan Star, and served as director of public relations for the World Boxing Organization, boxing commissioner in Puerto Rico and president of the Puerto Rico Boxing Commission over more than six decades in the sport.